Just in case he's needed in the rotation, the Red Sox are taking time with their southpaw.

Franklin Morales has had a lengthy rehab assignment for two reasons. The first is that his initial rehab was interrupted by a strained pectoral muscle, but the second, and most important for the Red Sox, is that they want to keep him stretched out as a starting pitcher in the event they need one. That requires innings, and for a pitcher who missed nearly all of spring training, it takes time for them to pile up.

That's why Morales, who has made three starts and thrown eight innings on his rehab assignment to this point, is expected to be at least two starts away from returning to the Red Sox, according to manager John Farrell. He'll start for the Triple-A Pawtucket Red Sox on Saturday, and then once more next week before his recall, assuming they stick with the plan of having him setup to start. 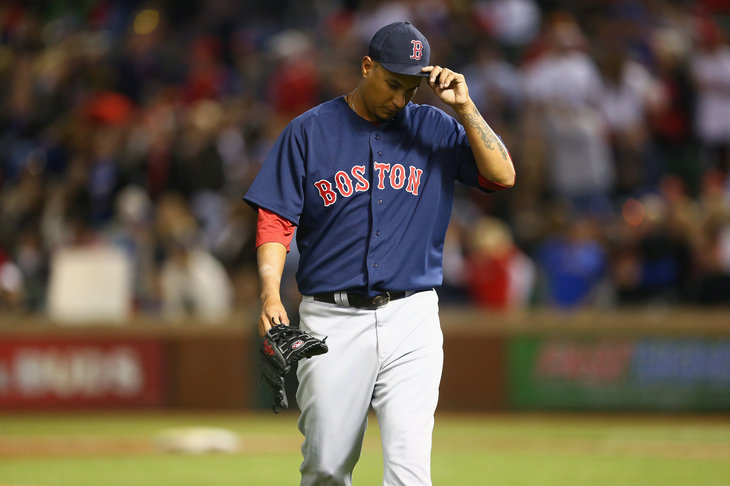 Felix Doubront is working on his mechanics as his next start approaches.

They very well might need Morales in the rotation, too, as Felix Doubront continues to be a mystery, with his velocity dropping, a consistent inability to put hitters away with something besides strikeouts, and no pain to speak of at the root of the problems. If Doubront can't succeed as a starter on a competitive Red Sox team, then Morales, who posted a 4.14 ERA, 2.6 strikeout-to-walk ratio, and over a strikeout per inning in his nine starts and 45 innings in the rotation last year, is a logical option to replace him. Especially since Doubront, who is also left-handed, could assume the role that Morales would have in the bullpen.

A lot of Morales' role upon his arrival likely depends on Doubront's performance on Thursday. If the mechanical tweaks he has been working on take, and he is able to look more like the promising Doubront of 2012 rather than the worrisome 2013 iteration, then it just might be the bullpen for Morales. If Doubront gets hit hard again, however, then Boston is going to have a decision to make.