The Red Sox have a lot of third basemen in the minors already, but one of the top college bats in the country could be added this June.

Share All sharing options for: MLB Draft 2013: Could Colin Moran be the first Red Sox pick?

The 2013 MLB amateur draft is less than a month away, and prospect analysts are rolling out their best (educated) guesses as to who will go where. Yet another different player has come up as a potential Red Sox in a mock draft, with Sports Illustrated naming Colin Moran as the seventh-overall selection in June.

Moran is a college third baseman at the University of North Carolina. He's left-handed, and SI's Dave Perkin suggests he has the potential for opposite field power that would put dents in the Green Monster. He'll be 20 years old on draft day, and will turn 21 around the end of the 2013 MLB season, making him a bit older than some of the high school position players Boston has been linked to, but still plenty young.

ESPN's Keith Law featured Moran in a minute-long video, which you can find embedded below:

Law calls him "the best pure college bat in this draft class," and says he has "incredible bat speed" and the ability to barrel up the baseball. His plate discipline is commended, with Law calling it "superb," and he believes that he could bring high batting averages to the pros. Defensively, he has work to do, but Law thinks he is a candidate to move over to first base -- you don't draft for need in baseball like you might in other sports, as development time changes that whole game plan, but a third baseman turned first baseman is the kind of thing the system could use down the road, so you can see why SI might think he's a fit. 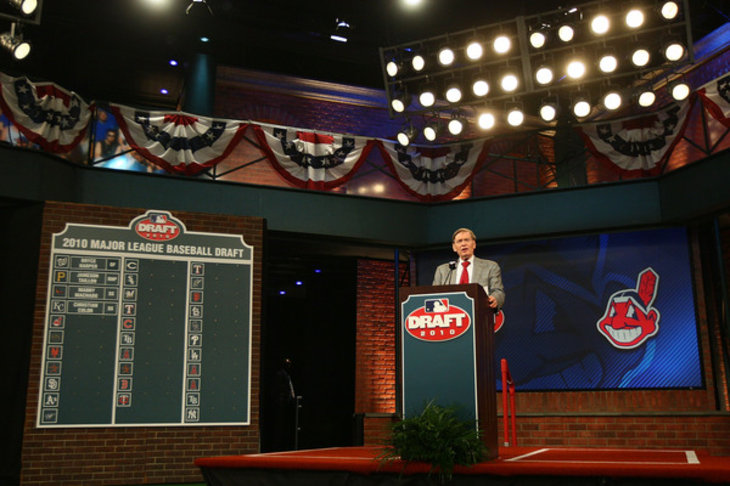 A well-rounded outfielder with center field potential could be an impressive haul for Boston at #7.

That's just one analyst's opinion, of course. Nick Faleris of Baseball Prospectus thinks Moran can provide "steady, if unspectacular" defense at the hot corner, and was also encouraged by his performance with wooden bats in the Cape Cod Baseball league last summer, though, he did say that Moran still remains better with metal bats than wooden ones. Faleris also points out that the college bat selection is thin in this year's draft, so take that into consideration before going too overboard with excitement in regards to Law's assessment of where Moran ranks among his peers.

Law also thinks that Moran will go in the top five, though, so if he's correct, Boston won't be able to get this college bat. Perkin has another potential Boston target, Clint Frazier, coming off the board at four to the Twins, and Braden Shipley, the collegiate right-hander with serious stuff, going at #15 to the Diamondbacks. These names will continue to pop up all over the board in the next few weeks, and even in the hours before the draft, but we might as well all get a head start on who is who now.