The final decision is Hanrahan's, but either way, the Red Sox might end up without their off-season acquisition.

Red Sox reliever Joel Hanrahan was placed on the 60-day disabled list before he even went to see specialist Dr. James Andrews, so you knew the chances of his being back anytime soon were slim. After his appointment, those chances thinned out even further, as he's now debating whether or not he's going to have season-ending elbow surgery in order to repair the damage.

Hanrahan's flexor tendon isn't just inflamed as the initial MRI suggested: it's also damaged. Surgery doesn't have to happen, as he could attempt rest and rehabilitation. The problem is that the rest and rehab route is not a guaranteed fix, while surgery is about as close to a guarantee as you can get with health: it's all about whether Hanrahan wants to attempt to pitch again for the Red Sox in 2013, or instead just call it a season and try to catch on with someone next year post-surgery.

As manager John Farrell said (via mlb.com's Jason Mastrodonato), "In situations like this, it's not uncommon for the player to make the final decision. Certainly it's his career, it's his arm." The procedure wouldn't be Tommy John surgery -- the flexor tendon is not the ulnar collateral ligament -- but further testing could determine that there is also trouble there. That's the kind of thing that rest and rehab might not be able to take care of, while going under the knife would allow for a more thorough fix. The downside, of course, that rather than just miss a few months, he would be out for the rest of this year and part of the next. 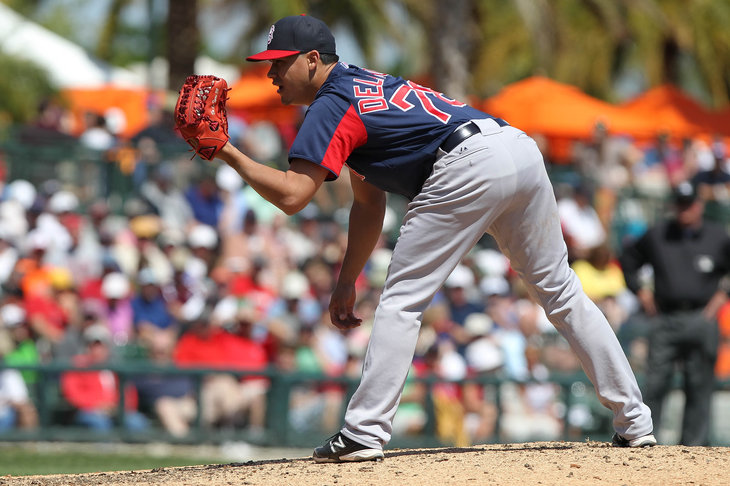 As expected, Boston has called up a reliever to take Joel Hanrahan's place in the bullpen.

Before you ask why Boston didn't catch this in the physicals when trading for Hanrahan, remember: injuries can build up over time. They aren't necessarily ever-present and just show themselves at an inopportune time. Hanrahan had dealt with some elbow discomfort a few years back, but nothing that caused him anything approaching serious trouble. His physical was clean, and he got through spring training without pain, but whatever was building up over time finally snapped in May on one pitch. It sounds similar to what happened to Rich Hill while he was on the mound for the Red Sox back in 2011, when he went from healthy and useful to exploded UCL in the blink of an eye. Remember, too, at that time, the Red Sox had three separate elbow cases that all went very differently. Daisuke Matsuzaka reported no pain, but had all the symptoms of an elbow injury in his performances -- tests confirmed he needed Tommy John. John Lackey had structural damage, but it wasn't enough in May, the time of his initial DL stint, to undergo surgery: that time came by year's end, when the damage was complete to both the Red Sox and Lackey's arm.

In short, pitchers are injury risks by virtue of their profession, and the rest is just timing. In Hanrahan's case, poor timing.

With Hanrahan out for the year, Andrew Bailey will take back the closer role when he returns from his DL stint. Boston's bullpen depth has taken a hit with the loss of Hanrahan, but luckily, they have arms to dip into still. Alex Wilson has already been up, and Jose De La Torre has now been added to the 40-man in Hanrahan's place. If it comes to it, there are additional arms in Pawtucket they could reach for, and there is always the trade deadline if they simply need some depth, such as with the addition of Craig Breslow to last year's squad.