The Red Sox are rumored to be unhappy with their catcher's production, and could be looking for someone else to take over.

Share All sharing options for: Red Sox looking to upgrade on Jarrod Saltalamacchia?

ESPN's Buster Olney was on the Mut & Merloni radio show on Wednesday, and dropped a Red Sox rumor out of nowhere: Boston might be looking to upgrade on catcher Jarrod Saltalamacchia, and might even do so well before the trade deadline. 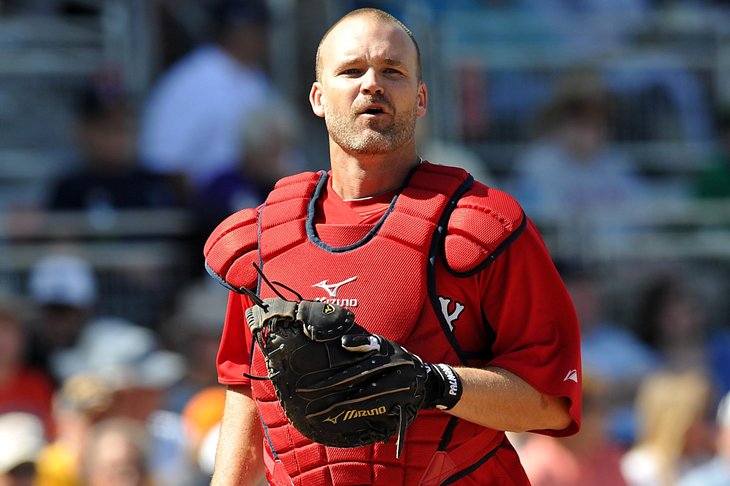 The Red Sox lacked premium defense behind the plate without Jason Varitek, but David Ross should fix that

Salty's defense has its positives -- he's solid at framing a pitch, and has a history of doing it well that advanced stats can vouch for -- but there are issues. He's not particularly good at blocking, and that transition seemed difficult for Red Sox pitchers who were used to working with Jason Varitek. He's not bad, but not great at throwing out would-be basestealers. In general, he doesn't give much, but doesn't cost the Sox any behind the plate. That sounds solid enough in theory when you consider he has at least an average bat for the position, but considering how much value catchers have in calling games, blocking pitches, and the like, it's absolutely an area they could upgrade on if they chose to.

That's why the Red Sox signed David Ross this past off-season, as the magic he works behind the plate is worth far more than what he's being paid. He's also there to help Salty out with some of the finer points of catcher defense. A front office executive who spoke on condition of anonymity said there are those around the league who feel Salty just doesn't work hard enough on his defense since he can hit -- this wouldn't be the most surprising thing to learn, given Boston had trouble unloading him this winter when they made him available to trade. That perceived lack of attention to detail By Salty might have cost the Red Sox on Tuesday against the Blue Jays, as Olney details:

...he gets interfered with by the umpire and doesn't say a word about it. Having heard a lot of things from a lot of players through the years, [not knowing the rule] isn't as much of a surprise to me. What's surprising to me is that there isn't that instinct there, where he doesn't immediately turn around and say, ‘Hey, you hit my hand.' I can't say that I know every rule in the rule book, but in that situation, you say, ‘Wait a minute, you interfered with me, you bumped me.' And you at least put your coaches and your manager - who were in the dugout and probably aren't aware of it - in a position where they at least come out and ask the question. You do wonder where the dominoes would have fallen if they say something to the home plate umpire."

There are no details as to who the Red Sox would be trying to acquire, but there are options out there. The Braves are in the last year of their deal with Brian McCann, and they have Evan Gattis in the majors as well as prospect Christian Bethancourt waiting to take over once McCann's time with Atlanta is up -- he doesn't have a great bat, but his defense is supposed to be big-league ready. Red Sox fans waiting for Christian Vazquez can surely understand the appeal. Carlos Ruiz is another impending free agent, and if the Phillies fall out of contention early enough, maybe they would be willing to deal. It's too early to guess at who could be available, though, so that will have to wait until there's something more than just Salty rumors out there.