There were more than enough concerns to go around, but David Ortiz ended up conquering April anyway.

It was easy to see how David Ortiz's April -- and by extension, that of the Red Sox -- could have gone horribly. Ortiz missed all of spring training in addition to the last two months of the 2012 season due to an Achilles injury, and, to make matters worse, it had morphed into heel inflammation that presented a new problem as he tried to work his way back from the initial issue. It was unclear when he would be back, how he would do when he returned, and what shape the Red Sox would be in by the he finally managed to slot in to Boston's lineup for the first time in 2013.

April is over now, though, and Ortiz has already returned. He's played nine games with the Red Sox, who closed out April with an 18-8 record and a hold on first place in the competitive American League East. They were able to do this, in large part, because of Ortiz's performance, in which somehow nothing went awry when all kinds of things could have.

Ortiz didn't miss all of April

When Ortiz would return was a huge question heading in to the 2013 season. Estimates ranged from Opening Day, to mid-April, to sometime in May, as the nature of his injury left his condition somewhat unpredictable and on a day-to-day basis. When he didn't make it for Opening Day, it was understandable that Red Sox fans -- and maybe even the Red Sox themselves -- were discouraged after experiencing Carl Crawford's will-he-or-won't-he injury roller coaster in 2012.

Fast-forward to April 20, though, and Ortiz was back at Fenway Park just in time to drop an F-bomb in front of a live, national audience following the arrest of suspect two in the Boston Marathon bombing. He made his presence felt at the plate, too, with two hits and an RBI in a game Boston won 4-3. 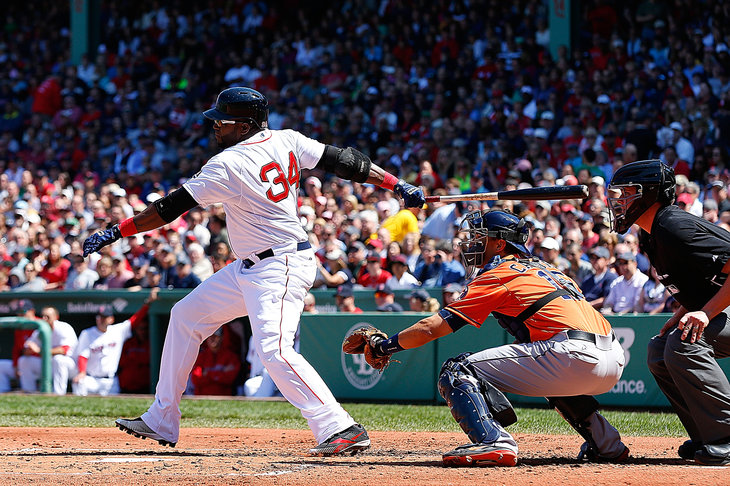 Thanks to injury, the Red Sox' designated hitter has himself a random and historic hit streak.

Well, he physically missed it, as in, he didn't participate. But this is meant more in that his performance didn't miss it, and that's a surprise. Part of Ortiz's resurgence the past couple of years has been attributed to staying in better shape and getting as many pre-season swings in as he could in order to show up to games that count without any of the rust of past Aprils. With that in mind, it was a concern when Ortiz had just a handful of rehab games before jumping right back into the Boston lineup. Would he be ready? Would the rust show enough to actually hurt the Red Sox until he got things under control?

It turned out that this was of little concern. Ortiz has hit .500 with three homers, six doubles, and a 1429 OPS in his nine games and 39 plate appearances. Despite the fact that FanGraphs and Baseball-Reference penalize designated hitters in their wins above replacement calculations for their lack of defense, Ortiz is just shy of a full win of value already. That pace won't keep up -- even Barry Bonds didn't hit like that -- but it goes to show you just how prepared Ortiz actually was for 2013, despite the fact he wasn't able to prepare himself. April 2009 and 2010 seem very, very distant all of a sudden.

There is a whole lot of season left, and Ortiz's heel remains a concern, even if things seem to be fine right now. In the meantime, though, it's good to know that concerns about April were left behind before the calendar even turned over to May. The Red Sox field a far more dangerous lineup with David Ortiz in it, and that's especially true when the Ortiz of the past couple of seasons is the one showing up.