Are the Red Sox the best team in baseball?

It's too early to ask the question, and I'm slightly afraid to utter the words out loud. Still, I have to ask--are the Red Sox the best team in baseball?

Share All sharing options for: Are the Red Sox the best team in baseball?

Even following their loss to the Blue Jays yesterday, the Boston Red Sox have the best record in baseball at 18-8, one win better than the next-best Braves, Played out over a full season, this pace would have the Red Sox winning 112 games--the highest win total in Red Sox history and the most wins the league has seen since the 2001 Seattle Mariners tied the major league record with 116. Of course just over 15% of games have been played so far, so betting the family farm on the Red Sox hitting triple digits is probably not a good idea. Really, gambling with real estate is a bad idea in general (outside of a hedge fund at least), but I digress...

Reckless wagering advice aside, this has been very nice start to the season for a Red Sox team that was not widely viewed as a contender out of spring training. After the bitter disappointment and agonizing soap opera that was the 2012 season, this team has at least begun to recapture the imagination of Red Sox fans. It is fair to say that they are better then most thought they would be, but are they the best team in baseball right now?

At this point, there are a few people who think they are, but just a few. Fox Sports and MLB.com both rank them number one in their power rankings. ESPN currently ranks them third. CBSSports.com’s Matt Synder ranks the Red Sox the lowest of the network outlets, putting them at five in his personal power rankings. Such power rankings do not necessarily look to name the best team in baseball, but instead gauge who is playing the best right now against expectations and details like strength of schedule and run differiental. Mostly, they are generally computed through polling writers or experts in the organization, however, so they are basically just opinions.

Still, those less-than-scientific methods are producing results not far off those produced by the more rigorous, stats-based method used at Baseball Prospectus. They give Boston the fifth-highest odds of making the playoffs right now and the fourth highest win total in baseball (87.8) However, they still rank the 16-10 Yankees ahead of them and no division leader is getting lower odds to win the division. Even so, this is a sizable improvement from BP’s pre-season projections, which had the Red Sox winning just 83-84 games, good for the third highest total in the division and only a 39.4% chance of making the playoffs. That number is up to 67.3% now.

While some projectors are not quite sold on , there is a solid case to be made that they are the best team in the game right now. Beyond straight wins and loses, has the best run differential in the game, scoring 1.5 runs more per game than they have allowed. That is 0.3 runs better than the next closest teams, the Rangers and the Braves, who tie for second at 1.2. They have the best road record in the game as well, going 7-3 away from Fenway. Only one American League team has allowed fewer runs per game (the Rangers) and only one team in baseball has scored more per game (the Athletics).

Digging deeper into the numbers, only the Rockies and Indians have a better wOBA than ’s .345. Of course, playing in Fenway helps the offense out, but this team looks good even after you account for that. The Red Sox are currently tied for second best in the park-adjusted weighted Runs Created Plus (wRC+) metric at 112. On defense, they rank fifth in the American League in defensive efficiency (), third in Defensive Runs Saved () and second in Ultimate Zone Rating (UZR), which is a fairly remarkable amount of agreement for defensive metrics. Predictably, all of that puts them at the top of the fWAR charts for position players as well. 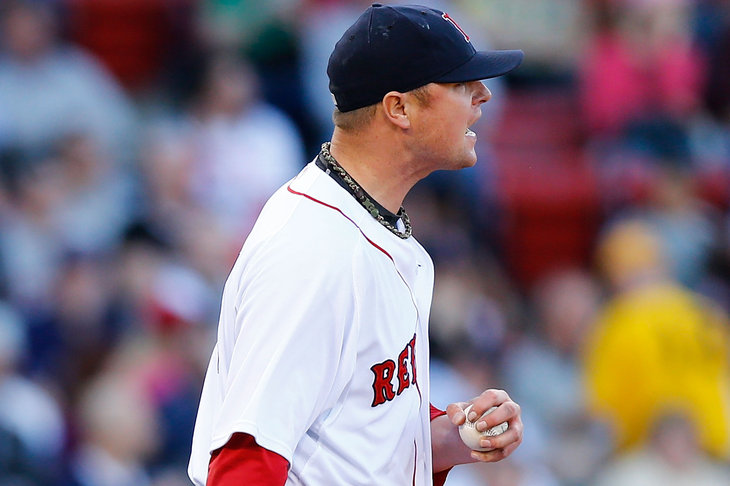 You've probably heard by now that the Red Sox strike out a lot of batters. Boston's pitching staff leads the game in strikeouts, strikeouts per nine, and even the more-precise strikeout percentage. The team is fourth in the in ERA and FIP and third in xFIP. The starting rotation has been carrying much of the weight so far; Red Sox starters rank third in the in all three metrics and relievers rank just tenth in the league in ERA, eleventh in FIP. Some positive regression could help the pen out, however, as they rank fifth in xFIP. At third in the league in K/9 and fourth in BB/9, a drop from their current 13.3% HR/FB rate would go along way to helping them out. If the team has to have a weakness, relief pitching is not the worst one to have, since it is probably the easiest area to upgrade in-season, and also perhaps effected unduly by players who are not going to be used in winnable games to begin with.

With the team ranking at the top of just about everything, the Red Sox certainly deserve to be in the best-team-in-baseball conversation. There is a pretty important argument against them right now, however. This Red Sox team has played a deceptively easy April schedule. Ben recently pointed out just how much help their numbers got from playing four games against the Astros. In 26 games, the Red Sox have played fourteen games against teams under .500, going 12-2. Against winning teams, they are 6-6. They beat up on the Astros, sweeping that four-game series as well as three-game series against the now 11-13 Indians and the 12-14 Rays. Their opponents haven’t been complete pushovers--Red Sox April opponents were 0.2 runs better than average--but they have only faced two teams currently in the top 10 in run differential. They lost both those series, with and each taking two-of-three against each outscoring the Red Sox 10-12. The road ahead appears similarly well-paved through the end of May so we may have to wait until June to really get a read on how this team can perform against top contenders.

The Red Sox are currently doing everything right. They haven’t played as tough a schedule as their rivals in Baltimore and New York, but they have played better teams than some of the other teams earning top honors in the power rankings. Notably, both the Braves and the Rangers have had far easier early schedules. While it is still too early to declare this club the best in baseball in any meaningful way, they have clearly been the best team in April, and there isn’t much about their success that is completely unsustainable. If nothing else, the Red Sox have proven they are a top contender for the title, something that was difficult to imagine before the season began.