One step from the majors, but a few players need to take bigger leaps than that to be big-league ready

De La Rosa isn't going to put up any eye-popping numbers in his return to Triple-A, at least, not right away. He'll be limited to two innings each start out of the gate, as he builds his arm strength and stamina back from after undergoing Tommy John surgery 20 months ago. Were he a major-league veteran, things would be different, but De La Rosa is all of 24 years old, and with a career-high innings total of just 110. The Red Sox will work him back slow, and, if they need him to come to the majors in July or what have you, he should be ready to step in and contribute from then until the end of the year. Early on, though, it's going to be someone else getting the call, despite De La Rosa's presence on the 40-man roster.

He should be worth the wait, however. De La Rosa has pitched in the majors before, and has struck out nearly a batter per inning in the process. He needs to cut down on the walks, and his secondary stuff needs to be more consistent before it's assured that he's a starting pitcher and not a high-leverage reliever, but that's just one more reason why he's back in Triple-A rather than being thrust back into the majors. 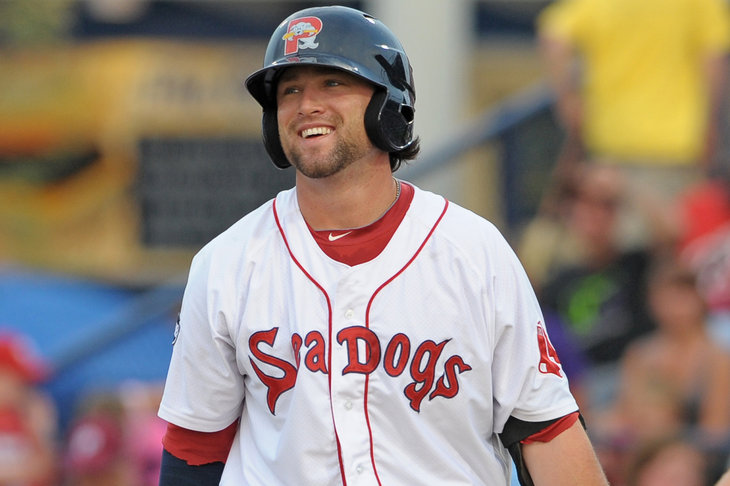 He's not the most exciting prospect in the world, but as close as he is to the majors, the right fielder could be the perfect complementary piece.

Brentz might be a bit overrated by some Red Sox fans at this point, as his excellent numbers in Single-A are a bit misleading in regards to projecting his future. That's not the same thing as saying he can't be good, or isn't a prospect -- he just might not be the long-term answer in right field by the time he's ready to hit the big-league scene.

Brentz's future could end up being similar to that of Jonny Gomes, and that's not a bad thing. Gomes has made a living mashing lefties and hitting righties just enough, and while he's a zero defensively, Brentz at least has a strong arm that could make him tolerable in right and useful in left. Brentz still has a ways to go to get to that point, though, as he has all of six games at Triple-A under his belt, including one game this week. He did manage to club two doubles in five times up, but he's going to have to do that sort of thing consistently: improvement on 2012's disappointing* .290/.349/.465 line would go a long way towards Brentz being more than just a dangerous platoon bat in the majors.

*That might not seem disappointing at first glance, but Brentz slugged .647 at Low-A Greenville and then .537 at High-A Salem in 2011 -- that's how he ended up in Double-A in his second full minor-league season to begin with.

It's also important to remember that Brentz is still just 24 years old. He's not incredibly young for a prospect, but he's no old man yet, either: he's a year younger than Ryan Lavarnway, Ryan Kalish, Brock Holt, and Jeremy Hazelbaker, and the same age Josh Reddick was when he finally put things together at Pawtucket and in the majors for Boston.

Wilson was basically a reliever all season in 2012, but he began the year starting, however briefly. So, for the sake of accuracy, 2013 will be his first full year out of the bullpen. He has to work on the same things that were important in 2012, except this time, he's on the 40-man roster, magnifying his successes and failures that much more by virtue of the fact he's taking up a precious and limited roster spot.

Wilson needs to keep his walks down, and continue to strike out batters. When he was on in 2012, he was unstoppable, but that didn't happen all of the time, and is part of the reason he never got the call to the bigs despite the fact the Red Sox almost always needed additional bodies in the bullpen. They started the year with Justin Thomas, and it didn't get any prettier from there. Things could change this year, though: if Wilson is looking strong this summer, and the Sox are in need of just one more arm that can miss bats for their bullpen, he could be that guy.