Boston's top prospect returns to Double-A, as do a potential catcher and first baseman of the future

You might have heard about this Xander Bogaerts character by now. He's the top prospect in the Red Sox organization, and it's not even close. That's not meant to be critical of Jackie Bradley Jr., either: Bogaerts' ceiling is just that impressive.

He didn't spend much time in camp with the Red Sox, as he was busy spreading the religion that is Honkbal worldwide while playing for the Netherlands in the World Baseball Classic. That doesn't matter, though, because it's just spring training: what we're interested in with Bogaerts is his second go-round at Double-A Portland.

Bogaerts hit .326/.351/.598 there in limited time in 2012, bashing five homers and 10 doubles in just under 100 plate appearances. He obviously has some work to do with bringing up his walk rate and displaying a patient approach against upper level pitching, but it's just as obvious that his power is for real. You know, if the last two years weren't an indication, when a teenager from Aruba beat up on more experienced and older pitchers, I mean.

The 2012 season jumped the expected pace for Bogaerts enough that he just might be a major-league shortstop for a time, but he'll need to pound Double-A once more and see himself at Triple-A Pawtucket before that's a sure thing. With Jose Iglesias expected to work through his final option year at Pawtucket so the Sox know what they have, and Stephen Drew expected to stick in Boston for the season, that last bit might not be an easy task without a change of position. We'll worry about that when it happens, though. For now, enjoy the best prospect the Red Sox have had in quite some time. 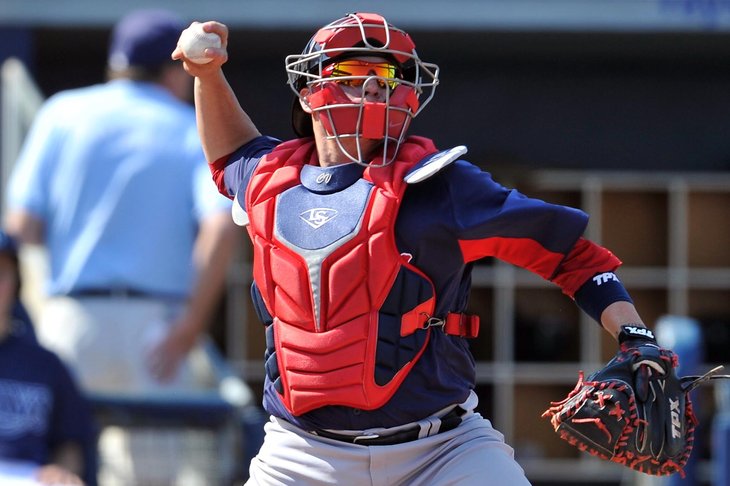 Vazquez is nowhere near as well known as Bogaerts, nor should he be: no one knows if he can hit advanced pitching yet, and there is a very good chance he's a backup catcher in the majors. With that being said, his defensive skills are already so very good, and so polished, that he still has a shot at being a valuable starting backstop in the majors. That's no small thing, and it's why the 2013 season is going to be very important for Vazquez.

His time at High-A Salem actually went better than his solid line suggests, as he hit .223/.308/.293 in the first half of the season for High-A Salem, while punching out 22 percent of the time. While April was fine enough, he hit a wall in May, and then the wall fell on top of him, and he couldn't get out from underneath said wall until the minor-league all-star break. He posted a 924 OPS in June, though, and kept on hitting until he was promoted to Double-A.

Once again, his offense wasn't acceptable with his introduction to the level, but 2013 is a new year. If he can rebound and show progress, he just might eclipse Ryan Lavarnway on the catching depth chart before the season is out. It's a long shot at this stage, given his youth and the questions about his bat, but with his fantastic glove, expect Boston to keep pushing him to succeed and closer to the majors.

Shaw is unheralded, and was listed just 23rd in Baseball America's latest team prospect rankings. However, he hit at Lowell in 2011 after he was selected in the ninth round of the 2011 draft, and then tore up High-A Salem as a 22-year-old before going to Double-A Portland to close out the year. There are issues with his time as a Sea Dog -- he hit just .227, and struck out 26 percent of the time. However, he also walked 21 times in 133 plate appearances, and still managed an Isolated Power of .200 and a .353 on-base percentage in spite of his contact issues.

Shaw is no sure thing, and might be the least of one of any of the three in this update. However, first base prospects worth paying attention to have become something of a rarity in today's game, while the cost for capable free agent first basemen have skyrocketed in part due to the massive contracts and extensions handed out to those who were and are more than just capable. That means that Shaw is worth paying attention to, as, if he can conquer Double-A as he did High-A, and find himself in Triple-A Pawtucket to close out 2013, then there just might be something to him as Boston's future first baseman. We're a long way from knowing, but continued success sure beats failure, and Shaw has succeeded to this point.