Ortiz has been missing since August of last year, but that could change before the month ends

Share All sharing options for: David Ortiz "hopefully" playing in games next week

David Ortiz didn't pick up a bat for a spring training game before the regular season began. His Achilles, injured last July, kept him from the field initially, and once that injury died down, a cascade problem -- inflammation in his heels -- put him out for just a bit longer. That all looks like it could be coming to an end shortly, though, as Ortiz is headed back to Florida on Thursday, in the hopes of playing in extended spring training contests by Monday.

Manager John Farrell said as much on WEEI Wednesday, with the expectation that Ortiz would be back in Boston in a "few weeks". If this is the case, and Ortiz continues is able to return with no more setbacks before April has run its course, then that likely means there are only a few weeks of Jackie Bradley Jr. left.

Jackie Bradley Jr. is apparently a gladiator but also a president 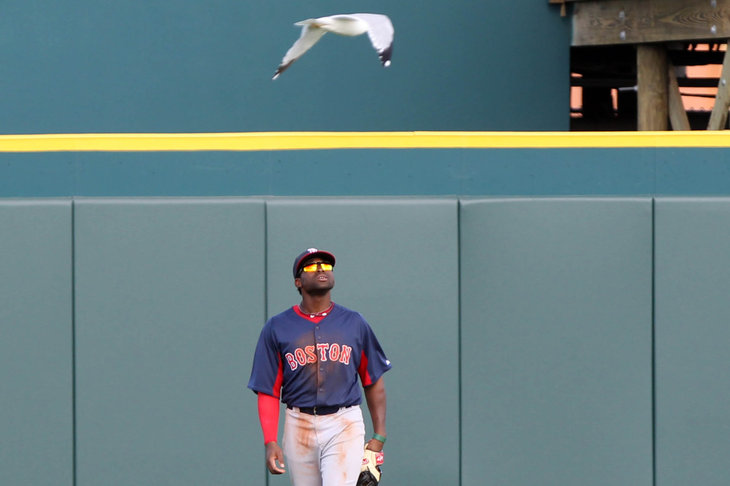 Now, now, that's not such a bad thing. Bradley's defense and patience have helped the Red Sox out already this season, yes, but the planned roster has Jonny Gomes and Daniel Nava splitting left field duties while Ortiz, as usual, is the designated hitter. That might not be the roster all year long, but if Ortiz is back and those two outfielders are healthy and productive, the need for Bradley at this early stage is lessened.

If Bradley proves to be the best option for left field for the 2013 Red Sox, then he'll surely be back so long as 20 days have passed since this expected option back to Triple-A Pawtucket. If Bradley accrues 20 days of service while in the minors, his 2019 season will be under team control, instead of having his contract end after 2018. After that, Bradley can play every day in left with Boston if that's what makes the roster best.

That determination will be up to his performance at Pawtucket, as well as those of Gomes and Nava in the bigs. It's a good problem to have, unless you've already forgotten about having to resort to Marlon Byrd and Scott Podsednik a year ago, anyway.