Boston heads back to Toronto to close out April, and hopefully to start May on similar footing.

It's much too early for schadenfreude, and as Red Sox fans know firsthand, a poor April doesn't necessarily mean your season is doomed or your team is as bad as its record. With that being said (and obvious), it should also be noted that the Red Sox have a chance to close out April by putting themselves 10.5 games up on the Toronto Blue Jays in the AL East by defeating them in game one of a three-game set in Toronto. That, plus a chance to kick May off on the right foot while using said foot to hold the Jays down, makes this series as important as any the Red Sox have had in 2013.

The Red Sox might have to do it without Shane Victorino running on a full tank, as his back has held him out of recent games, but they'll get Joel Hanrahan back after optioning Daniel Bard to the minors this weekend, and they're now 10 days in to the productive return of David Ortiz. Things are looking up, and that's saying something for a club that's started out at 18-7 despite a difficult April schedule.

Lester had some control issues against a patient Athletics' lineup, but he managed to hold them to three runs over 5-2/3 frames anyway, missing out on a quality start by a single out. You can't always bet on that kind of performance in the face of a walk per inning, but to Lester's credit, he's been far better than that on the whole in 2013, and can be forgiven for a single questionable start. Even with the half-dozen walks in one outing, Lester is walking 2.8 batters per nine on the year, about half-a-walk below his career rate, and owns what would be the loftiest K/BB of his career since 2009's career-high, should he keep it up.

He'll take on Morrow, who has struggled all year. He's striking out just 6.3 batters per nine after leading the American League in strikeout rate in 2011, homers have been an early problem, and his current K/BB would be his lowest as a Blue Jay. His first start was impressive, but it's been downhill since. The Red Sox missed facing him in their first series of the year, so hopefully they can add to his ERA trouble in their first opportunity to do so.

Clay Buchholz missed facing Toronto the first time around, so he'll look to add that notch to his belt on Wednesday, when he takes on Mark Buehrle. Lester has been great for the Sox, but Buchholz has been even better, picking up five deserved wins in five starts while logging 37-2/3 innings, striking out over a batter per inning, and posting an early season ERA+ that leads the American League. 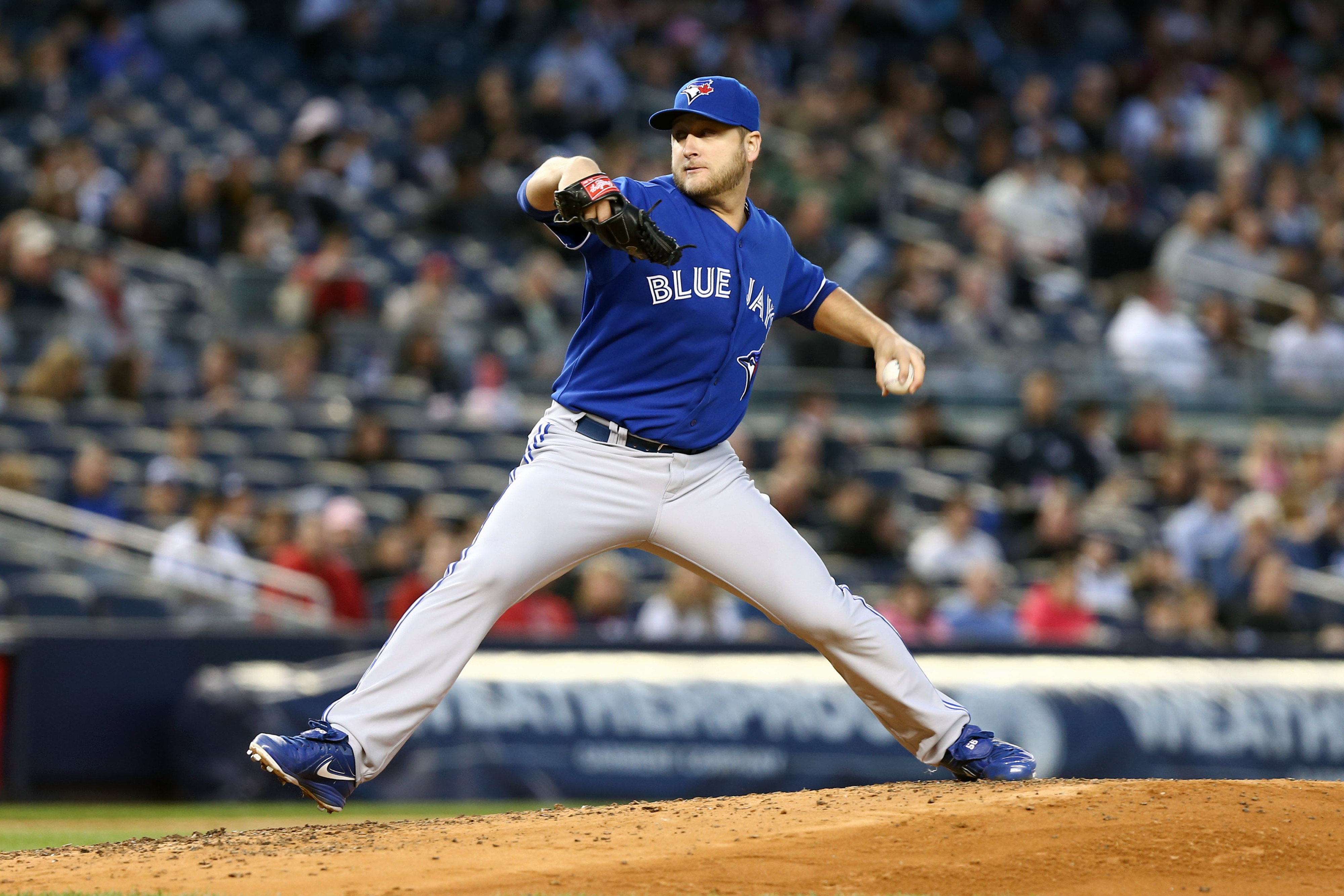 Buehrle, like Morrow, has not started 2013 off well, with a 6.35 ERA and just under two homers per nine in his five starts. Yeah, it's a bit early, so this might be a bit of confirmation bias at work, but Buehrle struggling isn't a huge surprise: he's been 35 percent worse than his career line by OPS allowed against the Yankees, and 16 percent worse against Boston. The heavy hitters of the AL East might not be quite where they were during Buehrle's earlier years, but neither is Buehrle, and that fact might be showing already.

Dempster returns to his native Canada, fresh off of defeating a Canadian opponent in Erik Bedard. Despite pitching well this year, he's logged two of Boston's seven losses, and only picked up his first victory in his last start against the Astros. Still, he's averaging six innings per start, owns a 3.30 ERA that looks even better under the lens of ERA+, and is striking out over three times as many batters as he's walking. The strikeouts should come down, but so too should the walks -- even if Dempster just ends up being a little better than average for Boston, if he can do it for 200 innings, then he's doing his job.

He'll be taking on... well, we don't know yet. R.A. Dickey pitched on Sunday, so it won't be him, and J.A. Happ threw on Saturday. Happ would be on four days rest if he were to go on Thursday, but the question might be more about the status of Josh Johnson, who had his last start skipped due to triceps inflammation. If it's Happ, he's been Toronto's best pitcher this year: a surprise in a good way, but also in a whole lot of bad ways as you can glean from Boston's other opponents in this series.

The Jays come into this match-up without Jose Reyes, who is on the 60-day disabled list, but they do have a healthy Jose Bautista at their disposal, unlike the last time these two clubs met. The Red Sox would love a repeat performance from both sides, when Boston took two of three and the series back in early April, and given their two best pitchers are taking the mound, they have as good a chance as they can get of pulling it off.