The Red Sox and the benefits of facing the Astros

The Red Sox picked up four more wins in their series against the Astros. But even beyond the benefit to their record, this was a series that just kept on giving.

Share All sharing options for: The Red Sox and the benefits of facing the Astros

The Boston Red Sox were in pretty good shape before the Houston Astros came to town. At 14-7, they were one of the best teams in the majors thanks to a combination of strong relief pitching, an excellent 1-2(-3) combo in the rotation, and an offense that, if unexplosive, could nickle-and-dime just about any pitcher to death.

Still, there were some concerns about that offense. Before the series against the Astros began, the two teams actually sat even in terms of wOBA at .323 a piece. That's actually a pretty decent figure. It would rank top-10 in the majors right now, though the obvious differences between the American and National Leagues make it a lot less impressive with the DH. The offense was hardly bad, but there were reasons to be concerned.

Four games later, and that figure sits at .344--the second best in the game, and tops in the American League. Over the course of their four games against Houston, the Red Sox collected 51 hits including 15 doubles, five homers, and even a pair of triples, adding in 14 walks for good measure.

Of course, those are just numbers. They're pretty to look at, but do they help going forward?

Usually the answer is no. There are few players so wrapped up in their statistics that stuff like is really likely to improve them. But there's a bit more to the story than just numbers in this case. 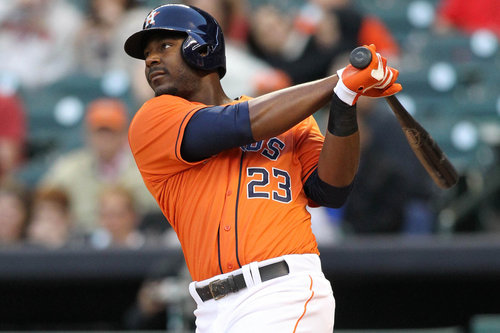 For instance, there's Will Middlebrooks. You don't need me to tell you just how awful he's looked at the plate these past few weeks. If anyone needed a jumpstart--to feel the impact of the bat making solid contact again, and seeing a few hits land fair--it was Will Middlebrooks. Well, now he's on a four-game hitting streak, and even managed to draw his first walk in nearly two weeks of awful, undisciplined flailing.

Stephen Drew didn't do quite as well as Middlebrooks in the series, but he, too, may have gotten some of the pressure off his back. 2-for-9 isn't much in terms of volume, but accounting for three RBI with those two hits is no small matter. If Boston fans still aren't in love with him, they've at least seen him come up with hits which, at the time, were fairly big, one of them even breaking a 1-1 tie that had lingered much too long for comfort.

Even for those who didn't play the Astros series was a boon. Shane Victorino managed to miss all four games against the Astros without hurting the team, hopefully getting healthy in the process.

The lineup isn't the only part of the team that benefited, either. If the Astros are a team which can hit with some authority, they're also not one which is going to apply too much in terms of consistent pressure with baserunners and the like. That helped John Lackey ease back into things with a strong start that helped reinforce his first four innings of the season against the Blue Jays. In a town that's pretty much ready to eat him alive on a moment's notice, that's not to be understated.

And then there's the bullpen. The Sox didn't exactly get to give them the series off like they may have hoped--Koji Uehara and Junichi Tazawa each had to pitch twice, though the latter had to face just five batters--but by the end of the series, John Farrell was actually forced to throw Andrew Bailey into a 6-1 game just to find him some work. That's big for a bullpen that had been taxed to the limit over the previous couple of weeks.

It's back to the grind now for the Red Sox. The Blue Jays may be 9-17, but they're certainly not a team to be taken lightly just yet. But they'll go to work in better shape for having faced the Astros, baseball's most giving of teams.

Unless you're the Yankees. Then they're unstoppable juggernauts.