The Red Sox are loaded with pitching depth at Pawtucket, and you can see that in their recently released rotation

The Red Sox, for once, seem loaded with pitching depth. Not just in terms of prospects, but when discussing arms that could impact the 2013 season in the rotation, either as spot starters or by wresting the job from someone else, as well. This fact is evident when you get a look at their rotation at Triple-A Pawtucket, as it contains a top prospect, a former top prospect, and a couple of intriguing arms that might be major-league caliber.

Wright is the Opening Day starter for the PawSox, but don't let that confuse you -- while possessing a potentially useful future, he's not the ace of this staff. However, there is plenty to like about him. Namely, the fact he throws a faster-than-usual knuckleball.

It's very difficult to project a knuckler, both the pitch and the pitcher, as it's more results-based than any other offering. Wright might be the first line of defense in the minors, and that could mean disaster in a spot start, or a game in which he baffles the opposition due to the nature of his primary pitch. You just don't know until he's out there, but in the meantime, he'll work on his craft at Pawtucket, putting more innings into his overall career experience with the pitch that could keep his career going. 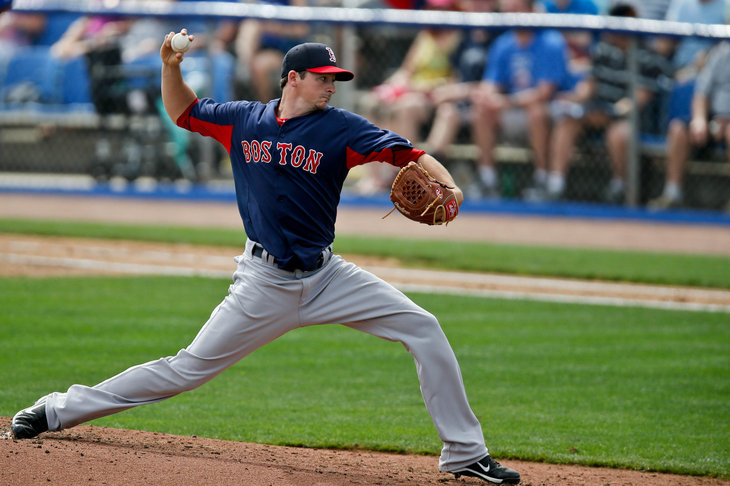 If you can only get to one PawSox game in 2013, you're going to want to go to one started by Allen Webster. He flashes multiple major-league-caliber plus pitches, and while he hasn't had command over them in the past -- leading to numbers that belie the nature of his stuff -- the Red Sox have worked with him on his mechanics in his short time in the organization.

Webster was the jewel of the August trade with the Dodgers that shipped out Adrian Gonzalez, Carl Crawford, Josh Beckett, Nick Punto, and $250 million in future contracts. That's not meant to imply that he's going to be more valuable than all of the good Boston can do with their freed up budget and roster spaces -- it's hard to find any pitcher who can be that good. But Webster could very well be remembered better in Boston than the trade itself down the road if his development goes the way the Red Sox think it can.

Hernandez isn't a prospect in the same way Webster is. He's much closer to Wright, in that it's unclear just how good he's going to be, if at all, but there are reasons to push him until he shows you he can be pushed no further. Anthony Ranaudo and Brandon Workman get all the press, but Hernandez, taken in the same 2010 draft by the Red Sox, is the first of the bunch to make it to Triple-A. This will be his second go-round at the level, too, as he tossed 42 frames and started seven games there in 2012.

Hernandez owns a 3.23 ERA in the minors over 275 innings, and while his 5.6 strikeouts per nine and 1.7 strikeout-to-walk ratio do not impress, he's a lefty that gets his outs on the ground. In 2011, he induced twice as many ground outs as air outs, and in 2012, continued that trend at Double-A Portland with a 1.7 GO/AO. Pawtucket didn't go quite as well in that regard, but if the 24-year-old can keep the ball low in the zone and out of dangerous places for his pitches to be, he can continue to succeed at the Triple-A level.

Hernandez is likely a reliever in the long-term, but there are far worse fates for seventh-round draft picks than ground ball-centric southpaw out of the pen. 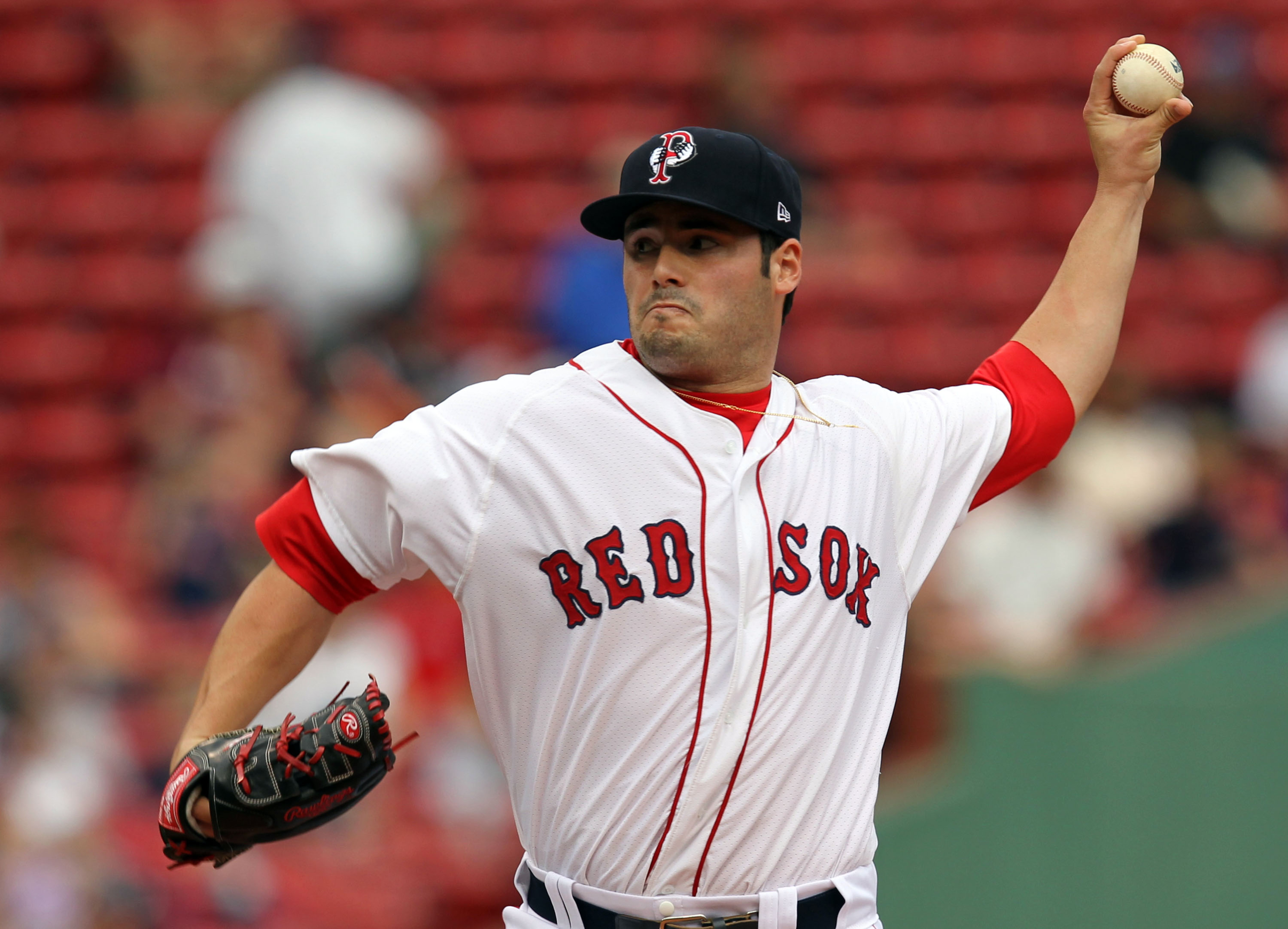 Doyle, at 27, is the old man of the staff. He pitched in Japan and for the White Sox' Triple-A affiliate in 2012, and Boston scooped him up as a minor-league free agent this off-season. He was drafted out of Boston College back in 2008 by those same White Sox, in the 37th round. While Doyle isn't exactly pushing his way into the majors, like Hernandez, he has continued to succeed as he's moved up the ladder. Not failing yet counts for a lot, and eventually means a chance to succeed on the big stage.

Doyle, like Hernandez, has mostly kept the ball on the ground, but the big right-hander has also missed quite a few more bats over the years than his southpaw rotation mate. He's not going to be what his numbers suggest in the majors, but a career in the majors as a reliever or emergency starter isn't out of the question. He throws four pitches, including but not limited to a fastball with some sink and a tight slider, and he also works fast. Some sink and a quick approach might seem like little things, but they can mean a lot to guys on the bubble like Doyle.

If nothing else, he represents better in-case-of-emergency options than the Red Sox have been tossing out there the last few years, and that in and of itself is a positive. Even if it's one you hope they never have to put into practice.

This is where things get a little odd. De La Rosa, as a pitcher with a prospect record as promising as Webster's, is going to be in the 2013 rotation. However, he underwent Tommy John surgery while still with the Dodgers back in 2011, and given his youth (24) and fewer than 300 professional innings, it's understandable that the Red Sox want to work him back in slowly.

That's where Graham Godfrey comes in, as he'll pair with De La Rosa at the season's start. De La Rosa will be on a strict innings limit as he builds himself back into a regular starter workload, and Godfrey will get a chance to pick up the other innings after Rubby reaches the night's goal. Godfrey himself isn't that intriguing of a pitcher, but he has pitched in the majors before; as essentially the sixth starter and something like the 13th or 14th option to start in Boston, he's not such a bad fit.

As for De La Rosa, when he's back to form, we're talking about a pitcher with a career 2.86 ERA and over a strikeout per inning in the minors, as well as a 100 ERA+ earned in 13 major-league games (10 starts) in 2011 as a 20-year-old. A 20-year-old in need of Tommy John, mind you. There is a potentially special arm here, and if he can get back on track developmentally, the Red Sox will be glad they didn't push too hard.