The Red Sox got their first win of the season on Monday in encouraging fashion, and Jon Lester pitched well enough to take that victory. Looking more deeply into his performance leads to more encouragement.

Share All sharing options for: Jon Lester and encouraging signs from Opening Day

There's an old adage in baseball that states a team cannot win a championship without good front-of-the-rotation pitching. A few years ago, the hope around Boston was that Jon Lester would be that guy for the Red Sox. After the 2010 season, it looked like the then-26 year old was ready to take that next step into the upper-echelon of pitchers in the game. He had just finished his third full season in the rotation, starting 97 games in that span while putting up a 138 ERA+ with a nice 2.8 K/BB to boot. A few days before Opening Day in 2011, Scott Lauber had this to say about the left-hander:

When Jon Lester began following baseball as a kid in Tacoma, Wash., labels like "ace" and "workhorse" were commonly applied to Randy Johnson, then the Seattle Mariners' most indispensable pitcher.

These days, fans across New England pin those words to Lester.

Of course, the last two seasons haven't followed that plan. While Lester's 3.47 ERA (124 ERA+) and 2.43 K/BB ratio in 2011 aren't terrible on the surface, they were a step-back for the young pitcher. On top of that, he imploded in the September collapse, to the tune of a 5.40 ERA in six starts that month. He picked up right where he left off in 2012, as well. His infamously poor performance last year (4.82 ERA, 90 ERA+) was one of the major reasons the entire team finished as low in the standings as it did.

Heading into this season, many people are calling for a big bounce-back for Lester. Part of the reason is due to the perceived lack of luck he received a year ago. The 2012 season saw him allow a .312 batting average on balls in play (BABIP), as well as an inflated 13-percent home run-to-fly ball ratio, the highest of his career. When you also consider his old pitching coach John Farrell has been brought back to manage the team, the signs are good for Lester. All of the major projection systems found across various platforms on the internet have Lester bouncing back to above-average status.

On Monday, he was able to begin his quest to prove these systems right, and he made a good first step on that quest. While he only lasted five innings, and he did allow two runs, his pitches looked sharp, especially early on. He was able to strike out seven Yankees, while walking just two. It wasn't a world-beating experience, but most agree that it was certainly a step in the right direction. Before getting too excited, though, I wanted to look at how the Pitch F/X* tool saw this start compared to his previous two season-opening outings. 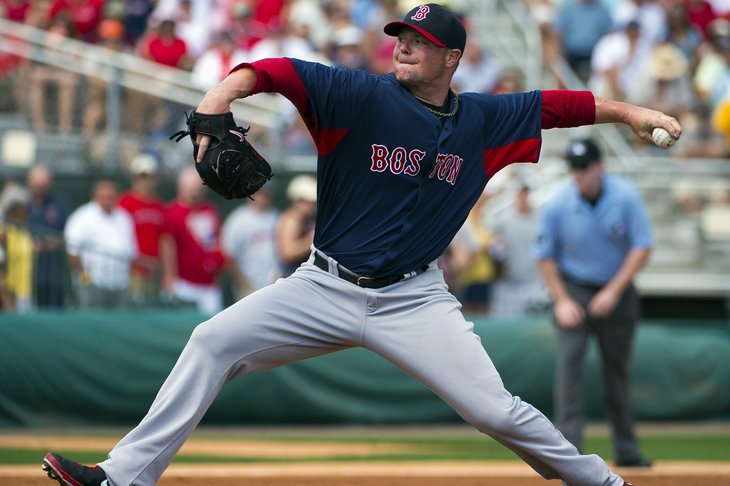 Jon Lester wasn't who the Red Sox needed on the mound for most of 2012, but there's reason to believe he can bounce back e

The first thing to look at was his velocity. The past two seasons have seen a drop in his fastball-speed, which has been deemed by many as a major reason for his poor performances. On Opening Day, his fastball averaged 92 MPH, and topped out at 94. The average velocity beat out those of his previous two season-opening starts by at least a mile per hour, while his max velocity was a mile per hour faster than it was in 2012, and the same as it was in 2011. The extra MPH may not seem like a huge deal, but it can truly make a world of difference in a full season. The velocity on his fastball was an encouraging sign to see in his first outing.

Another major improvement that Lester saw in his first start of 2013 was where he was locating his pitches. One reason Lester saw such a spike in his HR/FB ratio was that he was leaving far too many balls up in the zone. Against major-league hitting, that won't last long before being punished. In his first starts of 2012 and 2011, he let too many pitches stay up in the zone, which was a trend that continued far too consistently over those two seasons, especially last year. (The strikezone plots for those two seasons can be seen here and here.) On Monday, he was able to keep the ball down for the most part, which led to a good outing outside of his rough fourth inning.

That pitch location looks a lot better than we saw the past two years (especially in 2012), and will prove to be a major reason for improvement if he can keep it up all season.

Of course, it would be silly to get overly excited over one start. Even in his putrid season a year ago, Lester was able to put up a few good-to-great starts. However, there are signs to be encouraged by. If he is able to pound the lower part of the zone with a fastball-velocity back towards where it was three years ago, he'll be able to achieve that comeback that so many expect. He may not ever reach that ace-level status that so many expected after 2010, but the signs show that he's ready to get back to the second-tier of starting pitchers in baseball.

Note: If you'd like to peruse the PITCHf/x data a bit deeper yourself for these starts, click here, here and here.