Boston had a rough stretch in front of them 20 days ago, but they managed to come out on top.

Share All sharing options for: Despite odds, Red Sox' 19 games in 19 days is a success

The Red Sox had two days off in the first nine days of the 2013 season, but, as baseball schedules tend to do, things compressed quickly. On April 10, the Red Sox began a stretch with 19 games in 19 days, the kind of early season gauntlet that can help a club build a lead or dig a hole for themselves. With all that went wrong with the Red Sox in terms of injuries and notably poor performances in that stretch -- some of them from nearly the beginning -- it looked like it would be difficult for Boston to succeed. They did, though, and despite the issues, they're looking good on Monday, April 29, their first scheduled off day since April 9.

Boston entered play on April 10 at 5-2, in first place in the AL East, for whatever that's worth (hint: next to nothing) seven games into the season. While we had found out John Lackey was only suffering from inflammation in his biceps before the first of 19 games in 19 days, tightness when attempting to throw pushed him to the disabled list, guaranteeing that Alfredo Aceves would make a handful of starts in his place. Given Aceves isn't the most dependable of arms, this made a loss kicking off 19-in-19 that much more difficult to deal with, since it was assumed things would go awry in game two when Aceves took the mound.

Boston would lose that game as well, but they were given an early reprieve and day off on Friday, when rain cancelled the first of four Red Sox - Rays games. Boston reset their rotation, skipping Felix Doubront and putting Jon Lester on the mound for what was now game one of the series, and the Sox won that game. And the next one, when Clay Buchholz nearly no-hit the Rays, and the Patriots' Day game on Monday, when the Sox were lifted by Mike Napoli's walk-off wall shot.

Read More: Boston, you're our home

The mood was understandably somber just hours later, when news of the Boston Marathon bombing spread. The Red Sox had their chance to distract the city while in Cleveland, on a brief three-game road trip shoved in the middle of this endless stretch of baseball, but they had to do it without Joel Hanrahan, who was placed on the 15-day DL. They made the most of it, too, sweeping Terry Francona's Indians on the road -- a series with serious karmic potential for failure given Francona's ties to the Sox -- before coming back to Boston for a three-game set against the Royals. Once again, they ended up with Friday off, but this time, it was because Boston was in lock down as police chased the suspect from Monday's bombings. With the city once more secure by Friday night, the Sox were able to schedule a doubleheader for Sunday -- this day off ended up not being kind to them like the last, because they dropped the second game of the doubleheader essentially due to running out of relievers. On the bright side, prospect Allen Webster made his major-league debut, and it was one that built confidence in the starting depth of the Sox, and David Ortiz finally returned from the disabled list for Saturday's contest.

Despite the schedule, despite the events at home, and despite the injuries, the Red Sox were doing well in this stretch. Beating the Athletics, who had similarly been on a roll before a tough weekend, 9-6 in the first game of a three-game series continued that, and losing 13-0 the next night barely dampened the spirits, even if rain did dampen just about everything else. It was an odd feeling, to not feel dread following such a lopsided contest, but these Red Sox are attempting to prove they aren't the 2012 model, and have been doing a good job of just that. 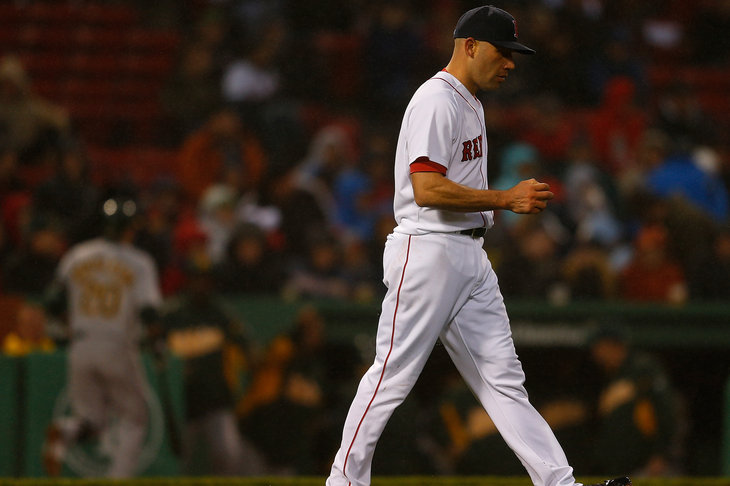 Losing is bad, losing by 13 is even worse, but there are some positives to take away from Tuesday's defeat.

They sent Aceves, who was in large part responsible for the 13-0 loss, to Triple-A Pawtucket. They beat the Athletics the next day, with former-closer-turned-closer-once-more Andrew Bailey shutting his old team down in a 6-5 game that secured another series victory for the Red Sox. Then they rattled off a four-game sweep of the Astros in Houston's first trip to Fenway since they were swept in June of 2003, and capped it off with the return of John Lackey, who limited the Astros to one run in six innings.

Boston only ended up with 18 games in 19 days, but it was still a tough stretch given everything that went wrong with injuries, the implosion of Aceves, the non-Astros portion of the schedule, and a bullpen that doesn't have anywhere near its optimal form. They now sit at 18-7, still in first place in the AL East, and with baseball's best record by two games. It feels weird for something to go right for the Red Sox after last year, but unlike in 2012, when stretches like this would have meant a deeper hole to climb out of, Boston managed to climb just a little bit higher. It's early yet, but this is a good sign in a place the Red Sox have not seen many in the last year, one that could mean good things for them down the road.

There will be more stretches like this in 2013, and they might not go quite as well, but for a team that's finished April at and under .500 in the last two years respectively, in a division that should be tight all year long, this is a welcome early season change of pace.