The Red Sox have sent Daniel Bard back to Double-A Portland, likely opening space for Joel Hanrahan to return to the team.

The Red Sox have optioned reliever Daniel Bard back to Double-A Portland, making room for the return of either Joel Hanrahan or Craig Breslow.

Bard had only pitched two games since rejoining the team, and while his first wasn't bad, his second saw him return to walking batters and earning a quick hook. He'll go back to work down below with the Sea Dogs,

While it's not clear which of the two rehabbing relievers will be the countermove, the smart money is on Joel Hanrahan. Originally placed on the disabled list for a hamstring injury, there was never much expectation that Hanrahan would be long in coming back. Now his 15 days are up, and after a pair of rehab outings, Hanrahan has said he feels ready to come back and pitch at 100%.

So Joel Hanrahan is back, but do Red Sox fans want him? While the official story is that it was Hanrahan's hmastring which led to first a five-run outing against Baltimore that cost the Sox a win, and then back-to-back walks in an outing that saw Hanrahan record zero outs, there are a fair few skeptics in Boston. Given that his control issues extend back into 2012, there are reasons to fear that there's more to Hanrahan's ineffectiveness than a simple hamstring strain. 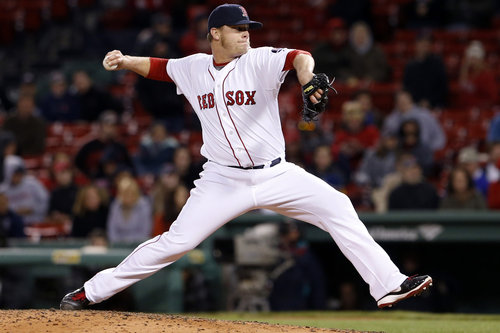 Has Andrew Bailey earned the nod as Boston's permanent closer?

The question now becomes: if Hanrahan is back, does Andrew Bailey still close? The interim closer has a 1.46 ERA in 12 innings of work with a remarkable 20 strikeouts in that period of time, and the Red Sox have both Junichi Tazawa and Koji Uehara lined up behind him for the seventh and eighth. It would only make sense for the team to want to avoid giving him important innings before they're sure he can handle it.

That being said, it's a big move to drop a player from closer to middle-innings reliever, even if he does perhaps pitch the eighth when Koji Uehara is out of gas. And John Farrell does seem to be something of a player's manager so far. It might not give them the best chance to win their next few games, but it wouldn't be hugely surprising to see Farrell stick with his original closer until he proves unable to fill the role.