The Red Sox are on top of the American League, but it's still early. What does it mean to be the best before May?

Share All sharing options for: What it means for the Red Sox to lead the league in April

You may recall that the Boston Red Sox started 2011 at 0-6. You may also remember that the most popular article for local scribes at the time was the long line of 0-6 teams that had not made the playoffs, with that precedent reassuring us that the team was doomed just six games into the season.

Of course, those auspices proved true. Even as the Red Sox had writers eating their own words in the summer, they were hurtling towards the terrible collapse that would leave them a broken franchise. Thankfully, things are different this year. The Red Sox did not start 0-6, but 4-2. They are not fighting for .500 with April coming to a close, but sitting atop the American League with a 15-7 record.

With that in mind, I thought maybe it was time to look at the flip side of that story. What's happened to teams that were leading their division on this date? 1996 seemed a natural cutoff point. Although 1995 was the first year with a wild card, it also started late due to the baseball strike, but we've still got all but one year of the wild card era to work with.

Over that period of time, due to a pair of ties, 36 teams could claim to have held a share of the best record in their league on April 26th. The average record of these teams was 15 - 6 (14.6 - 6.1 to be slightly more precise), leaving this edition of the Red Sox slightly behind pace. Their average record by season's end was 94 - 68--a record which would almost always be good for a playoff spot.

Of course, some teams performed notably better--the early parts of the list in particular are dotted with 100+ win teams--which means that some teams did much worse. Whereas being down 0-6 in the first week of the season was virtually a death sentence, a league-leading record this far in did not provide any guarantees for success. Of the 36 teams, only 24, or two-thirds would end up making the postseason.

Curiously, only one of those teams--last year's Texas Rangers--would make the postseason with a wild card spot. But, if we were to allow for a second wild card spot further back, another three teams would make it, bringing the mark up to 27, or three-fourths of the teams in question. 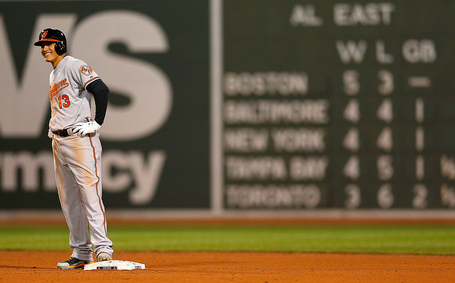 Coming into the year, Red Sox fans were not exactly an expectant bunch. Many hoped for some kind of run at the postseason, but plenty of others expected this would just be a season of rebuilding. Precious few were those who actually expected the Sox to win the division and make a postseason run. Expectations certainly have a tendency to change with such dramatic early results, but if you're not the sort to get swept up by this sort of early-season surge and have kept your expectation low, the prognosis should look even better to you. Only five teams played losing baseball from this point on, and only three teams finished with a losing record.

If, however, your standards are an unflinching "World Series or bust," well, the outlook is predictably worse. Only seven of these teams would go on to appear in the world series, and only four would come away winners. Then again, two of those World Series wins came in 2004 and 2007, so here's hoping.

So far, the Red Sox have won only 15 games, and nothing more. They haven't won the pennant, the division, or secured a wild card spot. None of that will even have a chance of happening for months and months to come.

But the good news, particularly for those just looking for a fun season after a really bad year, is that there's not many instances of bad teams faking their way to the top of the league this late in the season. If you've been holding off on excitement, hope, perhaps even emotional investment--well, it might be time to get on board.