What next for Alfredo Aceves?

Now that he's in Pawtucket, is he going to stay there, or is this just part one of a multi-part Boston plan?

Share All sharing options for: What next for Alfredo Aceves?

Alfredo Aceves has been optioned to Triple-A Pawtucket, and, according to Jon Heyman, the Red Sox expect him to report there within the 72 hours allotted him -- otherwise, he can't claim the $2.65 million he's still owed on his major-league contract. What's next for the right-handed pitcher, though? Is he actually going to stick in the minors, or will he not be Boston's problem for much longer?

There are a few directions the Red Sox could go with this. Peter Gammons reports that they are calling other clubs to let them know that Alfredo Aceves is available, and this likely has dual purposes that will ultimately determine his fate in Boston.

That was probably so obvious as to not be deserving of its own bold section head, but the HTML gods say it's too late to change that. Aceves being dealt elsewhere was one of those things the Red Sox would have liked to do roughly a month ago, but then Franklin Morales and Craig Breslow were both hurt, and Daniel Bard ended up in Portland to see if he left his missing strike zone there. Bard is already back, and both Morales and Breslow are on their way to the same, meaning Aceves' time was potentially up even if he didn't have a 5.93 ERA over his last 100 innings with the Red Sox dating back to the start of 2012. The fact he does made it that much easier to demote him while they figure out the whole trade thing.

Of course, someone needs to want Aceves in order to trade for him, and one front office executive spoken to said that this is unlikely unless they take back the problem of someone else. Given Boston's need for Aceves' roster spot, they might not be inclined to do this, leading us to...

Purpose #2: To find out if there is no one who wants Aceves

It seems like a small thing, but if no one else is willing to take a chance on Aceves, then the Red Sox can designate him for assignment in the hopes he clears waivers, opening up his spot on the 40-man roster. By reporting to Pawtucket, he'll be guaranteed his major-league salary even though he would then be a non-roster player, so it's not as if Boston is cutting him. He'll still be around, and may be willing to work hard to make it back to the majors in some useful capacity, but the Red Sox will be able to use his roster spot elsewhere.

If teams are fibbing to Boston about their interest, they'll find out by designating him. If someone claims him, Boston will surely work out a deal, and gladly take the roster spot opened up by it, even if cash is the only thing they can pull in.

Should the Red Sox cut ties with Alfredo Aceves? 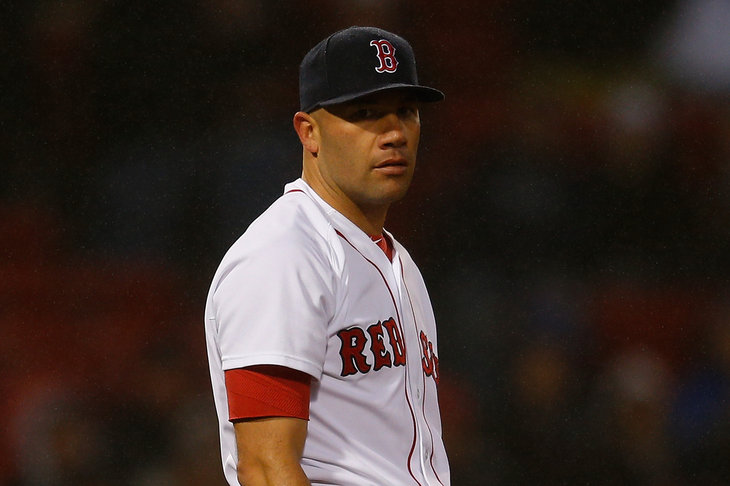 Alfredo Aceves had an atrocious start Tuesday night, and his postgame comments only made things worse. In the wake of all this, is it time for the team to finally move on without him?

The Red Sox could also just cut Aceves and eat the money they owe him. The money is spent whether he's with Boston or not, so if it's deemed that the remaining $2.65 million is more valuable to the Red Sox not throwing innings than it is throwing innings, then that's what they'll do. If they can't trade him, and they can't pass him through waivers, this might be what ends up happening next time they are in need of a roster spot.

The Red Sox are generally loathe to cast aside potential resources from their 40-man -- you would be, too, if your team had gone through as many injuries as Boston's has over the last few years -- but at some point (if not already), the likes of Allen Webster are going to come in ahead of Aceves on the depth chart for spot starts, and pitchers like Alex Wilson could very well eat those same major-league relief innings that the team was hoping Aceves would. They have options, and it should allow them to move Aceves, one way or another, in the coming weeks and months.