The latest on a trio of injured Red Sox pitchers, all looking to get back to Boston

Prior to Wednesday's game against the Athletics, Red Sox manager John Farrell dropped some information on a few injured pitchers, all working their way back to the majors on rehab assignments.

Lackey is expected to start Sunday against the Astros, but Farrell says the Red Sox will make the final decision on that after the right-hander's bullpen session on Thursday. If everything still points in the positive direction, then Lackey will make his second start of the year, and first since April 6 against the Blue Jays. 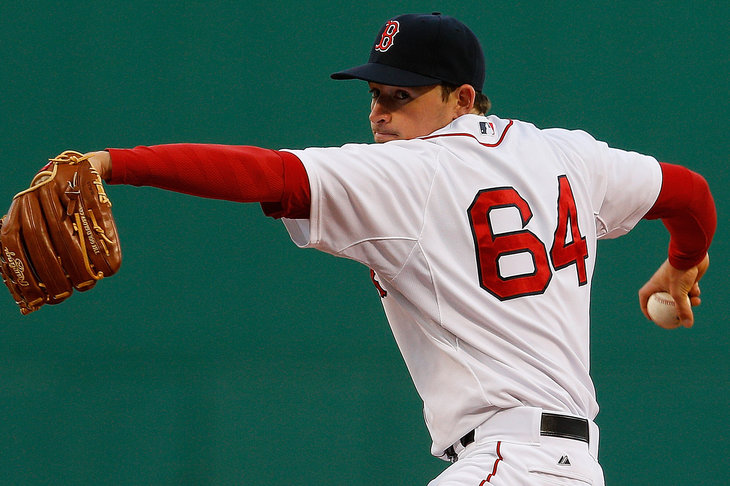 Lackey threw a rehab start for the Portland Sea Dogs on Tuesday, going just 3-2/3 innings while racking up five strikeouts against two walks without allowing a run. The Astros do not have a powerful lineup, and have struck out 200 times in 19 games this year, so as long as there is no pain, there's little reason to avoid using Lackey in the majors as soon as Sunday.

If Lackey can't go, then Farrell says Alfredo Aceves and Allen Webster are alternatives. Given Aceves' performance on Tuesday against the Athletics against Webster's quality big-league debut on Sunday, one hopes that debate would be over before it even started. Of course, the preference is a healthy Lackey, because the Red Sox will need him around. Allen Webster in the majors is a good thing in the long-term, but it's not necessarily a positive in April.

Hanrahan was shut down for a few days due to concerns over his hamstring, which supposedly had been messing with his mechanics and causing him to pitch poorly. With 19 games in 19 days and Alfredo Aceves pushed to the rotation with Lackey out, though, Hanrahan was put on the disabled list for the dual purpose of giving him more time to heal while also freeing up a roster spot for a pitcher who could take the mound for the Sox.

He'll be making a rehab appearance at Triple-A Pawtucket on Friday, but there's no word as to just when the Red Sox can expect him back. It's likely when he does come back that Alex Wilson, the reliever called up to take his place on the roster, will be sent back to Pawtucket in his stead.

Whether Hanrahan is going to resume his role as closer or not isn't something Farrell is discussing just yet. It would make sense to put him back in that role if he's healthy and good to go, though, as Andrew Bailey is the better pitcher, and should be used in the more dangerous moments for the Sox. Hanrahan with a two- or three-run lead most of the time is a less frightening proposition than a pitcher with control issues dealing with situations that involve inherited runners in close games.

Read More: Do the Red Sox have a fireman in Andrew Bailey?

Breslow started Tuesday's game for the Sea Dogs, with the plan being that he would throw an inning. Things didn't go so well, with Breslow giving up three runs, a walk, and three hits without recording an out. That being said, it was his first appearance of the year at any level, for a pitcher who didn't have a spring training due to shoulder weakness. It's not surprising he would have a bit of rust to shake off.

Breslow will pitch on both Saturday and Sunday in his first back-to-back appearances of his rehab stint, and that should give the Red Sox a better indication of how his shoulder is doing. If all is going well on the health front -- and he starts to record an out or two against minor-league batters once that rust comes off -- then he should be back with Boston shortly. Given Andrew Miller is the lone lefty in the bullpen, and the Boston pen has quite a few temporary names in it at present, getting a healthy Breslow back would be significant.