The Red Sox have recalled Daniel Bard from Double-A Portland, giving the former closer-in-waiting a chance to regain some standing in the eyes of the Sox.

According to Kevin Thomas of the Portland Press Herald, Daniel Bard is on his way back up to Boston, and will join the team before their 4:00 p.m. game against the Oakland Athletics Wednesday afternoon.

Bard's downfall after making the move to the rotation in 2012 has been well documented, so we won't bother to go back over it. While we did see positive signs from the reliever in spring training--most notably the return of his superlative velocity--he remained inconsistent and prone to bouts of wildness, prompting the Red Sox to send him to Double-A Portland to work out his issues. 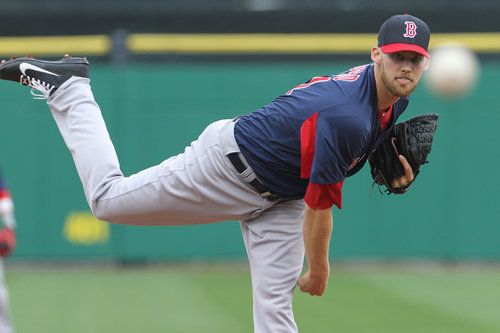 Catching up with Daniel Bard down in Double-A.

Down in the minors, Bard hasn't exactly been superlative, but he has managed to put together a decent run of outings, holding opponents to one unearned run over his last six innings of work. Unfortunately, he's recorded just three strikeouts and allowed three walks in that time, which perhaps speaks to the underlying problems remaining, but with Wright not terribly useful to the Red Sox in the immediate future, and few other options on the 40-man, the team had to turn somewhere.

It's unlikely Bard will be thrown right back into the fire. If the Red Sox need a sixth inning, they might turn to him, but for the most part he won't be pitching late in close games. Still, this is an opportunity for him to show that he's back to some semblance of normalcy and deserving of a major league roster spot. If that turns out to be the case, it will be a big boost for the Red Sox