On the Red Sox' defensive rebound

The Red Sox' strikeout-heavy pitching staff has taken center focus after the team's strong start, but the eight other players backing them up are quietly having an impact as well.

Share All sharing options for: On the Red Sox' defensive rebound

In eighteen games this year, the 2013 Red Sox have been much better at keeping opponents from scoring than the 2012 version. 1.97 runs per game better to be precise. Certainly, we must pause briefly to appreciate the nature of such a small sample and acknowledge the fact that the Red Sox are almost certainly not going to allow just three runs per game for the entire season. Still, this team appears to be truly different from the 2012 club.

The bulk of the credit for this turnaround belongs to the pitchers. The clubs 2.83 ERA is the third best mark in the game right now. That is strongly supported by an MLB-best 3.27 xFIP. As my esteemed colleague Matthew Kory pointed out, the Red Sox starters have been excellent in these early games, with an ERA of 2.53--again, the best in the MLB. The bullpen has been strong as well, with the exception of the injured Joel Hanrahan and the ever-wild Andrew Miller. However, as is so often the case, behind this great pitching staff is a great defense--a turnaround nearly as impressive.

The Red Sox currently find themselves near top of the leader board for team Defensive Efficiency Rating () with a fantastic .728, the third best mark in the American League. To put that in perspective, league average this year is around .687. Last season, league average was .694 and the Angels lead baseball in with just a .708 mark. This kind of defense would border on historic if the Red Sox could keep it up for the whole season. Of course, some regression here is likely. In the past 10 seasons only two teams (2003 Mariners and the 2010 Rays) have even topped .720 over a full season. However, the 2013 Red Sox certainly have the talent to remain among the best defensive teams in the game and it isn’t hard to image this club becoming the first Sox team to lead the league in since 2007.

Defensive Efficiency isn’t the only metric that loves the 2013 Red Sox either. The Red Sox may only rank 9th in baseball in Ultimate Zone Rating with three runs saved, but since they have also had the fewest balls in play of any club, the rate at which this group saves runs is much better. UZR estimates the Red Sox fielders will save the team 15 runs per 150 games if they keep up their slick-fielding ways. That is the third highest rate in the game, behind the Indians and the Braves (Has anyone noticed that the Braves are pretty good this season?)

Why are the Red Sox winning? It's the starting pitching, stupid. 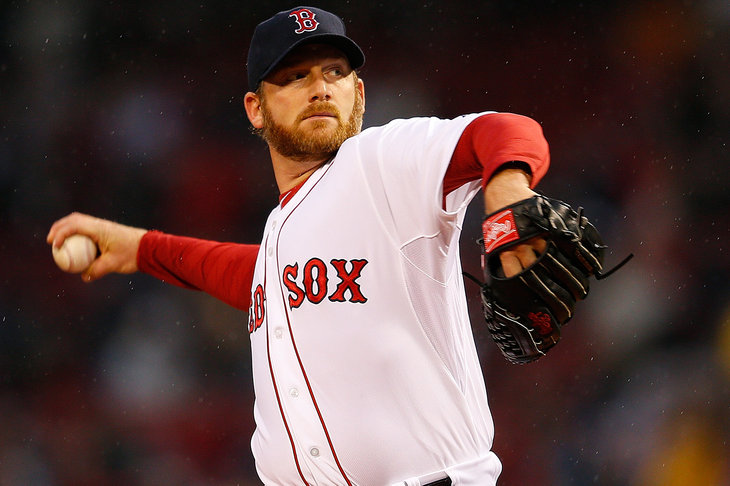 The Red Sox are back and the reason why is simple: starting pitching

There are only a few weaknesses in the Red Sox' defense right now. Mike Napoli’s defense at first has not been great, historically speaking, but this will be his first full season at the position and the early signs have been fairly positive. It is not as if he has been dreadful there in the past either, in 1156 innings, he has a -1.8 UZR and a -1 . Stephen Drew’s glove at shortstop will never live up to the impossible standard Jose Iglesias set at the start of the season, but he hardly qualifies as a liability. He had a rough season last year if both UZR and are to be believed, but he has had positive numbers in his three previous campaigns. As he gets further from the ankle injury that plagued him in 2011 and 2012, his glove is likely to rebound. The only real stone-gloved players the Red Sox are likely to employ are Jonny Gomes (a career -35 and -25.9 UZR in left) and Mike Carp (a career 1 and -1.8 UZR at 1B), two players who should see less-than-full-time work at positions on the bottom of the defensive spectrum.

Behind the plate the defensive picture is complex, but it would be difficult to conclude that the team’s catching is a weakness. Jarrod Saltalamacchia gets low marks for his throwing and passed balls (-19 career in 6+ seasons) but he has ranked solidly above-average in pitch framing in several studies. Prior to 2012, Mike Fast’s influential study on pitch framing credited him with 23 runs saved in a five year span. His backup, David Ross, is one of the best at just about everything a catcher can do on defense, with crediting him with 15 runs saved in his career. He was close behind Salty in Fast’s pitch framing study with 16 runs saved.

Nearly every other position player on the roster is capable of producing elite-level glove work somewhere on the field. Dustin Pedroia may be the best-fielding second baseman in the game (UZR and DSR both rank first over the past three seasons). Will Middlebrooks was consistently praised as plus-defender as he made his way through the minors and the early results have supported that assessment. In the outfield, the Red Sox have been playing three center fielders in Jacoby Ellsbury, Shane Victorino, and Jackie Bradley Jr. With Victorino--probably the weakest fielder of the group--shifted to right, the Red Sox have the extra range they need to cover that spacious corner of Fenway. Daniel Nava is certainly not the defender Jackie Bradley is, but his glove is dramatically improved since his first call-up in 2010 and likes it for three runs saved last season (though UZR is still down on him).

If the starting rotation keeps up their dominance, the defense will probably be overlooked. The rotation’s turnaround has been so dramatic that it deserves to be the focus for as long as it lasts. However, the turnaround on defense is pretty extreme as well. The 2012 Red Sox were below league average with a .689 20th in the league. That deficiency contributed to the team’s run-prevention struggles. That team had a number of the same strong defenders, but suffered from a constantly shifting outfield and some truly unfortunate defense following the trade with the Dodgers (Ryan Lavarnway stands out, for instance). Better defense couldn't have saved the pitching staff, but it did make their struggles worse.

This year, the Red Sox have clearly recaptured their defensive mojo. They may not keep up this level of elite defense, especially now that two of the best defenders on the team--Iglesias and Bradley--have headed south for Triple-A Pawtucket, but they are a strong bet to stay near the top of the defensive rankings. If that makes the pitchers look even more awesome, leaving the defense unnoticed and unappreciated behind them, what can you do? It’s a vicious cycle, especially for teams trying to score against the Red Sox.