A three-game match-up of two teams with an early (okay, very early) grip on a playoff spot

The Red Sox are fresh off of dropping two of three to the Royals, but still sit atop the American League East despite this. For the next three games, they'll be taking on the Athletics, who, at this moment, lead the wild card race in the AL thanks to their 12-7 record. Like Boston, they came in to their last series on a winning streak, but have now dropped three games in a row.

Something will have to give tonight, as one club's losing streak will end with a W in their head-to-head match-up. Boston won't be fully healthy in this series, but they haven't been that way all year, and it hasn't stopped them just yet. Plus, the Athletics aren't whole, either, with Yoenis Cespedes out of action and on the 15-day disabled list.

Felix Doubront makes his third start of the year, and hopefully this one will go more than just five innings. Doubront's appearance follows up on Sunday's doubleheader in which the Red Sox essentially ran out of relief arms due to the doubling of scheduled contests -- they had to use their allotted 26th roster spot on a starter rather than an extra reliever since Franklin Morales is rehabbing his back and Alfredo Aceves is already in the rotation.

Doubront has pitched well enough in his brief 2013 time, punching out 13 batters against four walks, but he's given up a few too many hits and tossed 104 pitches in five frames last time out. He needs to throw more strikes -- and quality ones -- to avoid another disaster like he had the last two times he faced the patient A's lineup: Doubront went just seven innings over two starts in 2012 against Oakland, and while he punched out 14 hitters, he also allowed 10 runs.

He'll be taking on A.J. Griffin, who has succeeded in his brief major-league career by limiting walks. He doesn't miss a ton of bats, and in a park like Fenway, that could be dangerous for the 25-year-old right-hander, especially given he's fly ball oriented.

Bartolo Colon's 50-game suspension from late-2012 is already up, and this will be his fourth start of the year. This might come as a shock to those who haven't paid attention to Colon for the last two-plus years, but he's succeeding by throwing a ton of strikes and limiting walks. In fact, in 19 innings, Colon hasn't issued a single free pass yet. The Red Sox will look to break that nifty streak, but they'll have to do it without a regular starter on the mound. 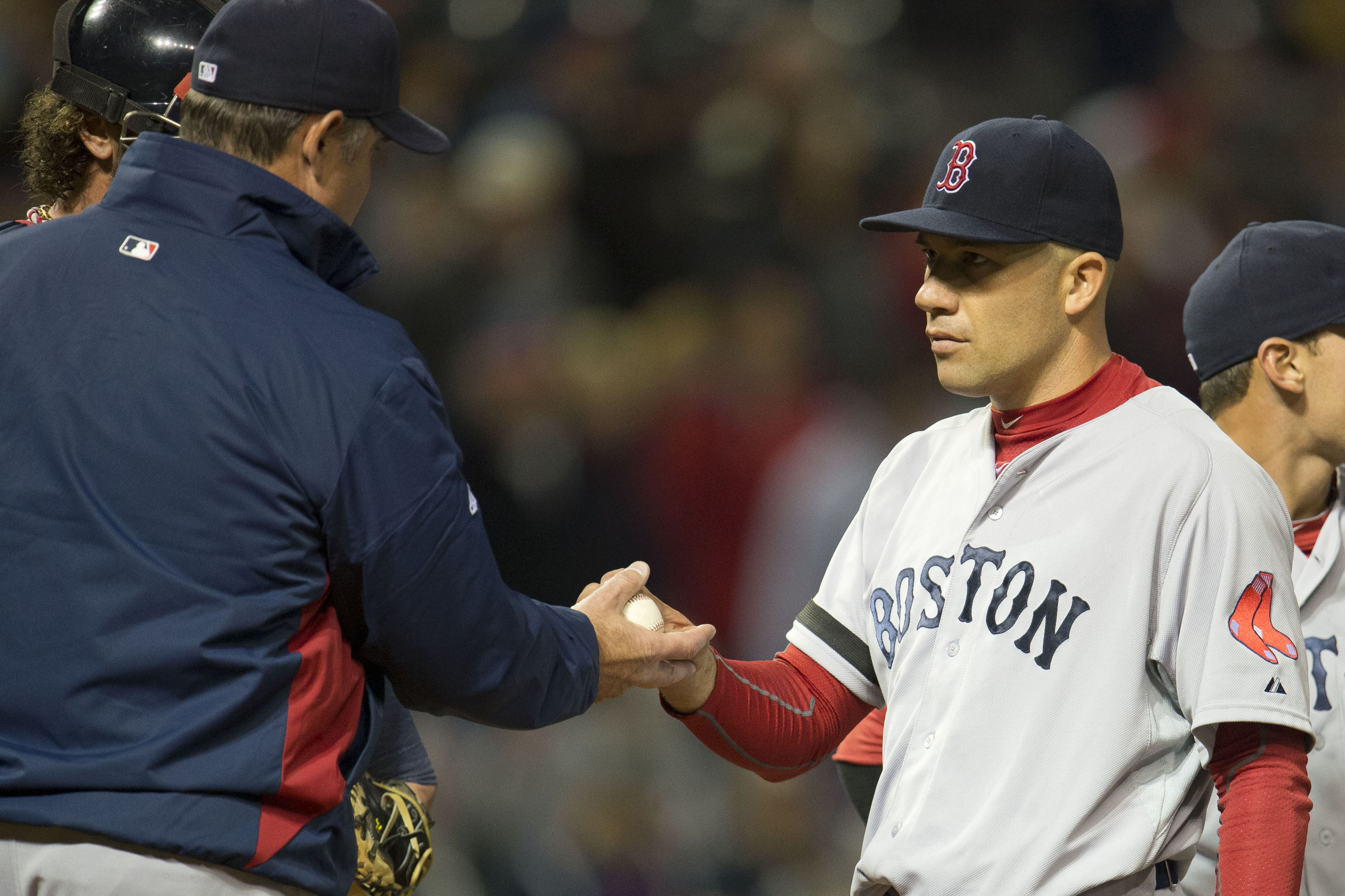 Aceves has pitched well enough to keep things close for the Red Sox lineup in his two starts filling in for John Lackey. This is possibly his final of three starts in that role, so wrapping up this run with another quality performance would do the Red Sox and Aceves wonders. Hopefully, John Farrell has learned a lesson about pushing the reliever too far in his starts, and will have someone ready to take over the moment Aceves doesn't have it this time around.

This should be the pitching match-up of the series, as both clubs send their top starter to the mound. Anderson was lifted from his previous start with a sprained ankle, and lasted just one inning, but as of now, he's still listed as the probable starter for Wednesday's afternoon contest. He's not having a great start to his 2013, as he's already allowed three homers and 11 walks in 19-2/3 innings, but it's Brett Anderson: unless something is wrong with him physically, he's capable of a quality outing.

He'll take on Lester, who has been highly successful in putting 2012's mechanical nightmare behind him. In four starts, Lester owns a 1.73 ERA and nearly six times as many strikeouts as walks. Both of those numbers are going to climb during the year, but Lester looks right for the first time since mid-2011 -- he's mechanically sound, hitting his spots consistently, and opponents, as they have tended to do since 2008 with the exception of last year, are heading back to the bench, one out at a time.

You might have noticed the game times are a little different this week, with starts coming 30 minutes earlier than usual in the first two contests, and Wednesday's game a 4 pm getaway day for the A's. Don't forget about that when planning out your evening, though, if things don't go well in Monday's contest, Doubront might still be pitching in the first inning by the time you turn it on. With multiple strikeouts in his line already, though.

Josh Reddick is coming back to town, but things have changed a little bit since the last time. Or, at least, they feel a little different: the Sox are doing well, Andrew Bailey is doing well, and Reddick has been in a bit of a funk at the plate dating back to the middle of last year. Still, it's good to see an old friend return, and hopefully any damage he causes is mitigated by Boston's own offense. Assuming, anyway, that the trimming of his beard will ignite his bat as hoped.