The minor-league season is starting soon, so reacquaint yourself with Boston's low-level full-season club

The minor-league season hasn't started yet, but there is no reason we can't reintroduce you to some of Boston's prospects before that happens in a few days. Just like last year, we'll go level-by-level, with the Greenville Drive's update running on Tuesdays, kicking off our coverage for the week. (Later in the season, the short-season Lowell Spinners will be featured first, on Mondays.)

There are no stats yet, but we do know what the minor-league rosters look like, so it's easy enough to preview a handful of prospects from each level this week while we wait for the minor-league games that count to begin.

Brian Johnson was the Red Sox' second draft pick in 2012, picked with the compensation selection the Phillies had to send Boston's way in exchange for signing free agent Jonathan Papelbon. The left-hander isn't considered a high-ceiling arm, but he is believed to have a high floor. He's the kind of arm that might only be a back-end starter, but could be in the majors in a short time.

His rise was slowed ever so slightly by the events of 2012, however. Johnson didn't sign for a bit thanks to participation in the College World Series, and then, after just 5-2/3 innings, Johnson ended up missing the rest of the season after taking a line drive to the face during the Spinners' Futures at Fenway game.

He'll begin his first full season in the majors this year at Greenville, and while the Red Sox won't rush him through the system, he will be pushed. According to Sox Prospects, he already has "smooth, repeatable mechanics" and the ability to pitch to either lefties or righties thanks to an ability to throw strikes and a fastball with sink. Someone like that should carve up low-level hitters, with the real challenge -- as it so often does -- coming at the upper levels. 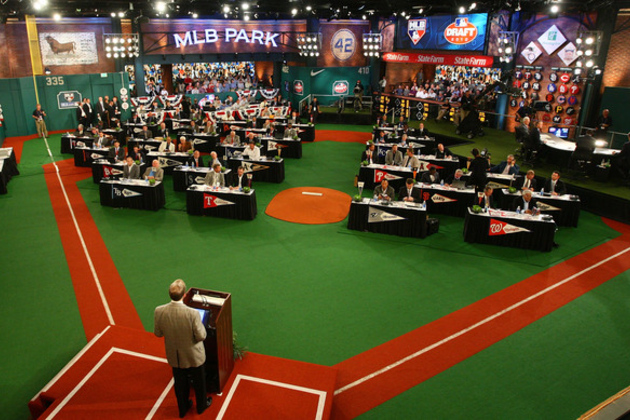 Maddox was Johnson's teammate at Florida, and also delayed in his signing. He got in before the deadline, though, and under slot to boot, helping the Red Sox use their draft budget effectively. He was a two-way player there, while the Red Sox plan to use him as a pitcher full-time now that he's out of the amateur ranks. He has a low-to-mid-90s sinking fastball at present, and while he also has secondary offerings at his disposal, they aren't quite as developed. Not a shock for a pitcher that spent last year in short-season ball and college.

Unlike Johnson, Maddox isn't going to stick as a starter. He profiles as a back-end reliever, especially if he can improve his command a bit and make that fastball into even more of a sinking weapon. Sox Prospects agrees as well, saying "Scouts love his makeup as a future closer."

Pat Light is also a potential closer, but whether or not he moves into that role isn't as cut-and-dry as it might be for Maddox. Light was Boston's final first-round selection, the sandwich pick they earned for Papelbon's exit. He's currently a starter for Greenville after sticking in that role with the Spinners, for what that's worth at these low levels. Bullpen Banter's Al Skorupa had these promising things to say about the right-hander:

Light can reach plus to plus plus velos with his heater and it's difficult to square up. I saw Light pitch for Monmouth in the Spring and his heater was dominant but he tried nibbling with a promising slider that did flatten out at times and a split change that didn't fool hitters at all. When I saw him pitch for Lowell he was doing much better staying on top of his slider and his changeup looked plus, diving late out of the zone and generating some ugly swings. I see Light as a starter all the way, but his stuff would play up very well out of the pen, too.

Sox Prospects sees him sticking in the starter role for now simply to have more innings to work on his repertoire, as the Red Sox like to do -- see Alex Wilson, Ryan Pressly, and eventually Drake Britton for recent evidence of this. With that being said, if they can get a couple of dominant back-end arms out of the early rounds of this draft, then that's a positive given the cost of quality relievers these days, and the general failure rate for draft picks.