In praise of John Farrell

Share All sharing options for: In praise of John Farrell

On April 5th, 2012, Opening Day, the Red Sox scored two runs in the ninth off of Jose Valverde, undoing eight innings of dominance by Justin Verlander and drawing even with the Tigers at 2-2. In the bottom of the ninth, Bobby Valentine called on Mark Melancon to hold the fort, then after a pair of singles and a fly ball out, pulled him for Alfredo Aceves.

There is quite a bit going on in this move, especially with all the advantages of hindsight. We know now that Mark Melancon would have one of the worst beginnings to a season of any reliever in recent memory. We know now that Alfredo Aceves is no closer (though we may have had our suspicions that it was mostly a way to placate the prima donna reliever after keeping him out of the rotation). We know now that Aceves would proceed to hit a batter and then give up the walk-off hit, dropping the Red Sox to 0-1.

Yesterday, John Farrell called on Andrew Miller to pitch the seventh inning. Miller opened the frame by surrendering two walks, and if he looked slightly better in his second at bat, he was still clearly struggling. Farrell, however, did not go to the mound. He did not panic and rush a cold Andrew Bailey into the game. He kept Miller in, and Miller responded by striking out Eduardo Nunez and Robinson Cano.

Now, it's easy to fall into the trap of praising a manager when their moves work and criticizing them when they don't. Really, what we should be considering is the thought process involved, accepting that sometimes the best moves go wrong and the worst moves go right. The key is that if you always make the move that makes the most sense, over a long period of time you'll hit a lot more often than if you always make the wrong move.

Still, when looking at Farrell's decision yesterday and Bobby Valentine's decision in that first game one year ago, I can't help but think things went as they should have. Mark Melancon, after all, had not given up 11 runs in just two innings of work yet. His most recent work had been 74 innings of 2.78 ERA ball with the Astros--not the sort of player you yank after back-to-back hits. Pulling him was a clear vote of no-confidence in a player who, frankly, should have started the year as the closer. Alfredo Aceves, if he was coming off a good season, had never been a closer, and really had found his value in 2011 in a strange combination of durability and luck. 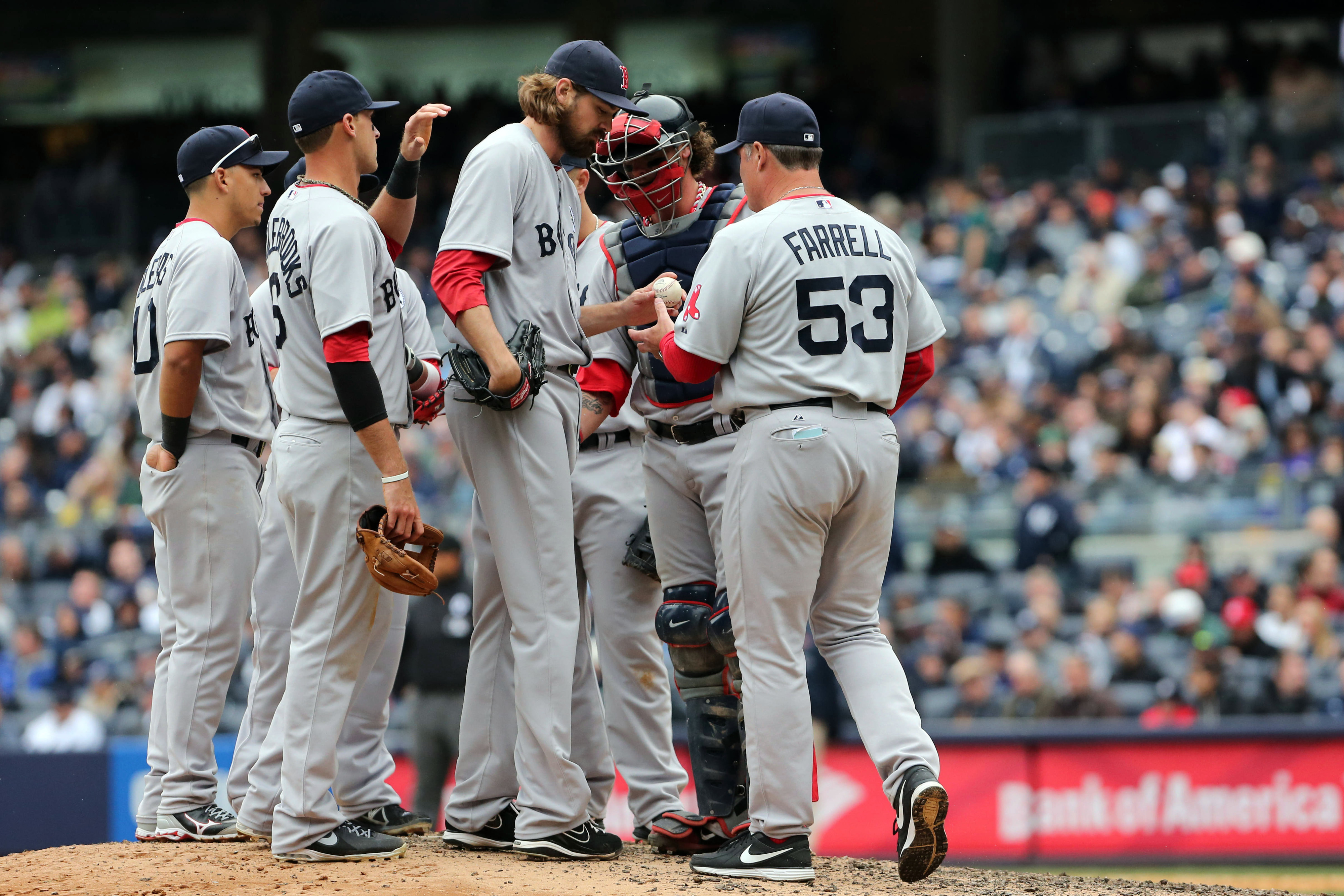 With John Farrell, on the other hand, the game situation dictated the decision. The Yankees' Opening Day lineup was not the sort to put fear in the hearts of pitchers, but if there was one man who was going to ruin the Red Sox' fun, it was Robinson Cano. Cano, of course, is left-handed, and has predictably hit righties better over the course of his career. This platoon split was especially pronounced in 2012. Meanwhile, with Craig Breslow on the disabled list, Miller was Boston's only southpaw in the bullpen, and had just spent 2012 establishing himself as a legitimate lefty specialist.

With a three-run lead, and plenty of right-handed firepower in the pen to handle the likes of Kevin Youkilis, Farrell did what he had to, leaving Andrew Miller in. The first pitch to Cano was one of those sliders that crosses the whole of the zone before dropping to Earth, and Cano swung at it, falling behind 0-1. That pitch was why Farrell left Miller in.

There were a couple of question marks for the rest of the game, but each can be easily explained away. Koji Uehara coming out after a five-pitch sixth can be chalked up to a long top of the seventh for the Red Sox. Using Andrew Bailey over Junichi Tazawa in the seventh to get Kevin Youkilis makes all the sense in the world, since Bailey--however uncertain we may feel about him after 2012--is a former closer used to pressure situations, while Junichi Tazawa thrived in fresh innings in 2012. Hanrahan coming in for the ninth is just fine, too, since the Sox have a day off today and it gave the closer a chance to get his footing while keeping the non-save situation excuse in the back pocket in case of a bad outing.

It's quite likely that, had Bobby Valentine left Mark Melancon in that game one year ago, the Red Sox would have lost that inning all the same. It was entirely possible that leaving Andrew Miller in would lead to a Robinson Cano grand slam and another Red Sox heartbreaker. It's difficult to be impartial on Bobby Valentine after the year he put us through, and difficult to be impartial on John Farrell less than 24 hours after an Opening Day win. But no matter how you look at it, Farrell's first impression as a manager was a good one. We can only hope he maintains this standard as the year continues.