In his first crack at facing major-league competition, Junichi Tazawa didn't exactly light up opposing batters. However, since the start of the 2012 season, he has been one of the most dominant arms in the league.

Share All sharing options for: Junichi Tazawa and pure domination

Coming into the season, the bullpen was considered to be one of the strengths for the Red Sox. There's a former Rookie of the Year, who has also appeared in two All-Star games and has three 20-save seasons under his belt. There's yet another two-time All-Star who has back-to-back 35-save seasons and commanded a relatively sizable package in return for his services. Yet another new addition has put up a ridiculous 10.76 K/BB ratio with a 184 ERA+ over the past three seasons. However, despite their established resumes, one could put up a credible argument that none of Andrew Bailey, Joel Hanrahan and Koji Uehara is the best reliever in Boston. That title could well go to the one and only Junichi Tazawa.

Tazawa was signed out of Japan by the Red Sox in the winter prior to the 2009 season. At the time, he was brought on to be a starter, and made his debut in August of that season. He struggled mightily in that first year, to the tune of a 7.46 ERA and a less-than-encouraging 5.54 FIP. He then missed the entire 2010 season after having surgery on his right elbow before returning to the majors for three below-average appearances in 2011. At that point in his career, many fans around Boston had written him off as nothing more than a fringe-contributor who could be stashed in AAA if multiple injuries occurred to the pitching staff. If we're being honest, I was one of those people.

After five shut down appearances in April of 2012, he was sent back down to Pawtucket for a few months. However, when Tazawa was recalled in July, he began to set the league on fire in a way that few could have anticipated. Despite only pitching 44 innings, Tazawa's 1.2 fWAR was the fifth highest amongst all Red Sox pitchers last season. 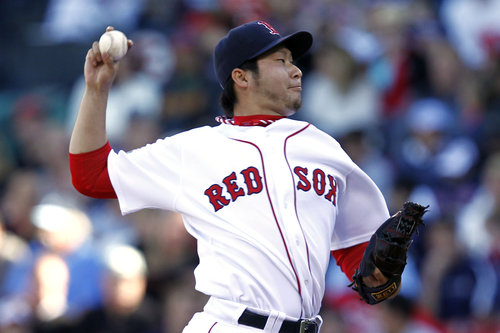 The view on Tazawa from 70 days ago.

Early on in 2013, he has been proving that last season was no fluke, too. In his first eight innings of work this year, he has yet to allow a walk, while striking out eight. The only run he has allowed was on a solo home run off the bat of a red-hot Jose Reyes. Over the 52 innings he has pitched since the start of the 2012 season, he has struck out 53 batters, while walkling just five (5!) and hitting two. He has clearly been one of the most productive pitchers on the Red Sox over that time. Given their roster that may not being saying too much, but the domination still stands when comparing him to pitchers around the league. 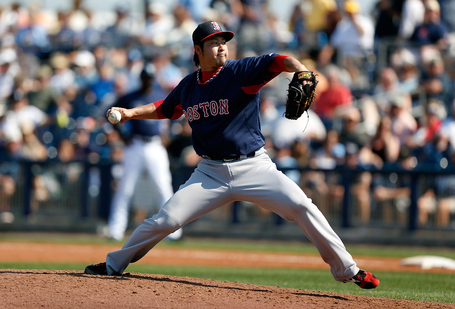 Looking at all pitchers who have thrown at least 40 innings since the start of last season, Tazawa's 1.96 FIP ranks third in all of baseball. The two pitchers ahead of him are considered two of the most dominant relief pitchers in the league, namely Craig Kimbrel and Aroldis Chapman. If run-prevention is more your style, his 34 ERA- is also third in baseball, this time trailing Kimbrel and Fernando Rodney. Suffice it to say, that's some pretty tremendous company to be in. Looking strictly at his ability to limit walks, Tazawa is truly unmatched. Since April of 2012, he has walked just 2.5 percent of the batters he has faced, which is the best in the majors over that span. On top of that, his 26 percent strikeout rate in that time is the second highest amongst those in the top ten (bottom ten?) of walk-rate, trailing only Sergio Romo.

After only 44 innings of dominance last season, it was easy to write Tazawa off as a possible fluke, one who could be good but never as good as he was that year. However, his start this season is putting those doubts to bed. In fact, there's a chance he could even improve. According to Brooks Baseball, his four-seam fastball has seen a slight uptick in velocity over last season, and his splitter has gotten a full two MPH faster. As if he hadn't already endeared himself to the K/BB-lovers among us, it looks like he could possibly see a slight rise in his K-rate in 2013.

After looking like nothing more than a depth pitcher after the 2011 season, Junichi Tazawa has since emerged to be one of the top relief arms in the game. He may not have the established track record that some of his bullpen-colleagues have, but by the looks of it that resume isn't too far out of reach. Plus, with all of these arms already here, it's likely he won't be tied down to any one inning, specifically the ninth. He will be free to pitch in any situation deemed necessary by John Farrell. There's still room to love Bailey, Hanrahan (maybe) and Uehara (if you follow me on Twitter, you know I do). However, when there's a one-run game in the sixth, seventh or eighth, you'll be relieved to know that the situation will be left in the hands of one of the most dominant relief pitchers the league has seen over the last year-plus.