John Farrell made his first big mistake as the Red Sox manager, and while it didn't cost his team the game, it's something that needs to be avoided going forward.

The honeymoon period with John Farrell has been pretty long. Thanks in large part to his history with the team and the completely atrocious job done by his predecessor, Bobby Valentine, the new Red Sox manager could have done anything short of insulting Ted Williams and calling for a new ballpark leading up to the start of the season without getting the fans to turn against him.

To his credit, though, he's not been testing the good will of the Fenway faithful. Oh, sure, he's not been perfect--no manager is--but for all that the newly-aggressive Sox have been running into a few outs, he's been doing a good job with this team. There's not really much question that the atmosphere is improved, the starting rotation has produced some startling results, and, oh yeah, the Red Sox are 10-4. Another couple weeks of this and he might be able to get away with cracking a few jokes at Teddy Ballgame's expense after all.

Last night, though, as the Red Sox ground out that tenth win of the year, the honeymoon period might well have ended. For the first time, Sox fans were shouting in disbelief and desperation as their manager left Alfredo Aceves in to give up not one, not two, but three runs that never had to score, letting the Indians get back into a game which, to that point, had been all Red Sox.

Some fans will say that Alfredo Aceves never should have been out there to start the sixth inning, and at first glance, it's easy to see where they're coming from. After putting away the first two batters he faced in the fifth in short order, Aceves got tagged for a pair of hits, then walked Michael Brantley to load the bases. The only thing that kept the Indians from putting up three on him right then and there was a great running catch by Shane Victorino to rob Asrubal Cabrera of extra bases. 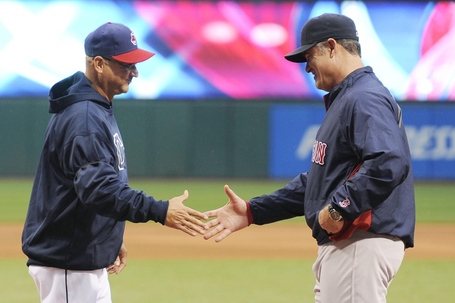 Still, sometimes just getting out of the inning can make all the difference. With the Red Sox in the midst of a lengthy stretch without any days off, and the bullpen currently employing both Alex Wilson, Steven Wright, and frankly Clayton Mortensen due to injuries, it made sense that Farrell would see if he couldn't get the extra inning out of Aceves. 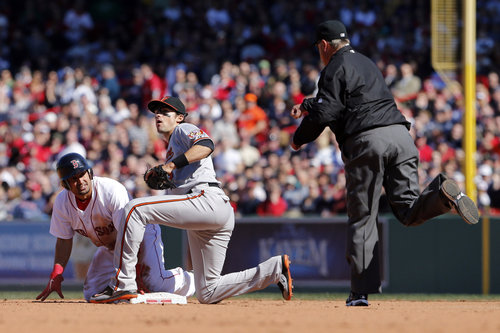 John Farrell has brought a lot of positives to the Boston Red Sox, but also a few outs that could have been avoided.

What did not make sense was the fact that he was completely unprepared for the most likely outcome: that Aceves would prove gassed, give up a baserunner, and pretty clearly need to be pulled. He wasn't even ready for it after the home run that followed. Or the one that followed that. Farrell had nobody ready in the bullpen, and didn't start anyone warming until it was almost too late. By the time he finally could call on Junichi Tazawa, the tying run was at the plate.

The good news is that the bullpen was good enough to simply absorb the gaffe and get the Red Sox their fifth straight win. Junichi Tazawa, Koji Uehara, and Andrew Bailey threw four perfect innings, striking out eight batters in what is probably the best we've seen out of a Red Sox bullpen in years. Still, Sox fans can't just look at three-run managerial decisions and shrug.

What's most baffling about Farrell's gaffe is that there's really just no explanation for it. No real upside for the Red Sox. At best, he would save one Red Sox reliever a few warm-up pitches. But what Farrell really has to be looking to do is save innings on the arms of Tazawa, Uehara, and Bailey--his core three at the moment. The best way to do that is to avoid needing them, and leaving a gassed pitcher out there to walk batters and give up homers (very much what you would expect a gassed Aceves to do) is exactly how you let a team back into a game. Frankly, if Andrew Miller or even Steven Wright enter the sixth after Aceves gives up that walk to Carlos Santana, it's entirely possible that Junichi Tazawa and Koji Uehara never even see action.

The only possible explanation I can think of is that Farrell is loath to warm relievers up before other pitchers are really in trouble because he doesn't want to hurt their confidence. Frankly, this isn't the first time this year he's been slow to get someone warming--whenever he's been a batter late, it's been because he waited until the situation was getting to be critical to make the call. This can't be the strategy going forward, though. What really kills a pitcher's confidence isn't seeing someone get warm before they even start pitching their next inning, it's giving up three runs after going five shutout.

For now, it hasn't killed the Red Sox. They won last night, and the good Farrell has done with his arrival is apparent just about every time they take the field. But he's not perfect, and if he doesn't get to work on fixing these holes of his, the warm and fuzzy feelings could start to wear off.