The Red Sox prospect is scuffling at the plate, and losing playing time

Justin Masterson does not do well against left-handed hitters. Sure, he's started out 2013 well, with insane early-season numbers bested only by Clay Buchholz's similarly silly figures. However, in his career -- a far more reliable assessment -- the right-handed hurler has been great against his fellow righty, and awful against lefties.

That's why it's a bit curious that Jackie Bradley Jr. is not in Wednesday night's lineup against Masterson. Despite the fact that Bradley is left-handed, and left-handed batters have put up a 790 OPS against Masterson in his career -- the league-average lefty vs. righty match-up in 2012 resulted in just a 748 OPS -- he's sitting in favor of, essentially, Mike Carp. While Daniel Nava is in left field for the evening, Mike Napoli has shifted from first to DH, with Jonny Gomes getting the night off against a right-hander. Carp is the one who ends up in the lineup, at first for his first start of the year, rather than Bradley against a natural opponent.

Bradley came in as a defensive replacement in Tuesday's contest, and has totaled just 11 plate appearances in his last four starts and Boston's last six games, in part due to his removal in the seventh for a pinch-hitter on April 11. Were he in the minors, he would be starting and playing every game -- he'll be there soon enough, when David Ortiz comes back, but the Red Sox are making it obvious that's going to happen days before it actually does.

Bradley is also in the midst of an 0-for-20 skid, and has been on base just four times since April 5, after collecting two hits and three walks in Boston's first series of the year. It's understandable that he's not going to get to play while Boston is trying to win with a performance like that. However, he's still a prospect, and still in need of development -- he wouldn't even be here if not for Ortiz's injury, and would instead be at Triple-A Pawtucket following his excellent spring. 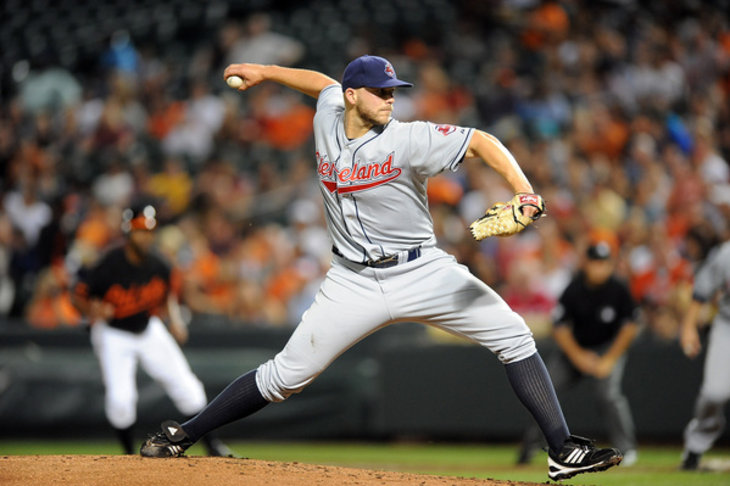 With Justin Masterson set to start tonight's Red Sox - Indians game, we look back at the trade which sent him to Cleveland in the first place.

It just seems like the Red Sox should have sent Bradley down in favor of someone else before the trip to Cleveland if they had determined he wasn't going to play in two-thirds of the series, in what are likely his last three games before his demotion.

However, there are roster rules to consider that make this a lot less simple. If the Red Sox sent Bradley down prior to the Cleveland series (or today, or tomorrow), and Ortiz had a setback in his rehab, they wouldn't be able to recall Bradley before the minimum of 10 days in the minors had passed. As Ortiz is already on the disabled list, it's a different situation than if there were a new injury that resulted in a disabled list trip and changed the roster construction of the 25-man, allowing the team to circumvent roster rules.

Since Alex Hassan is the only other outfielder on the 40-man roster, and he hasn't even begun his season due to a fracture in his foot and subsequent recovery, losing an outfielder to option rules for 10 days would be a problem that would result in more Mike Carp than the Sox might want, as well as more Gomes against righties. The way around this would be to place someone else -- anyone else -- on the disabled list, but you can't exactly bank on that.

So, instead, we're left with a situation that's far from optimal, where Bradley is little use at the plate for the Red Sox, even against a pitcher known for susceptibility to left-handed hitters, but he can't be removed from the roster in case of emergency, even if it gets in the way of his development for a few games. That means his demotion will just have to wait until Friday, and his next game very well might wait until then, too.