With his hamstring a problem, Hanrahan has been disabled while a knuckler gets his first shot in the majors

With reliever Joel Hanrahan sidelined by a hamstring injury, the Red Sox have a void to fill in their bullpen. That spot will now be taken by Triple-A starting pitcher -- and knuckler -- Steven Wright, according to CBS Sports' Jon Heyman. As Hanrahan is injured, he has been placed on the 15-day DL in order to make room for Wright.

Wright has been scratched from his last two starts with Pawtucket, as a precaution in case his presence was needed with the Red Sox, and that includes Tuesday's PawSox game scheduled for noon. While he starts for the PawSox, Boston's rotation is currently whole given Alfredo Aceves survived his first attempt at filling in for John Lackey. Where Wright could find himself useful temporarily -- and possibly in the future, too -- is as a change of pace out of the bullpen thanks to his knuckler.Picture Felix Doubront working with his heat and wicked cutter, and having to switch from that to an inning of a guy throwing butterflies in the high-70s, followed up by Junichi Tazawa throwing rockets that seem that much faster. It could work, as long as Wright is able to find the right parts of the strike zone consistently. Whether he can do that is an open question, as it is with all knucklers, and he might end up in mop-up duty to start so no one has to find out the answer in a close game. 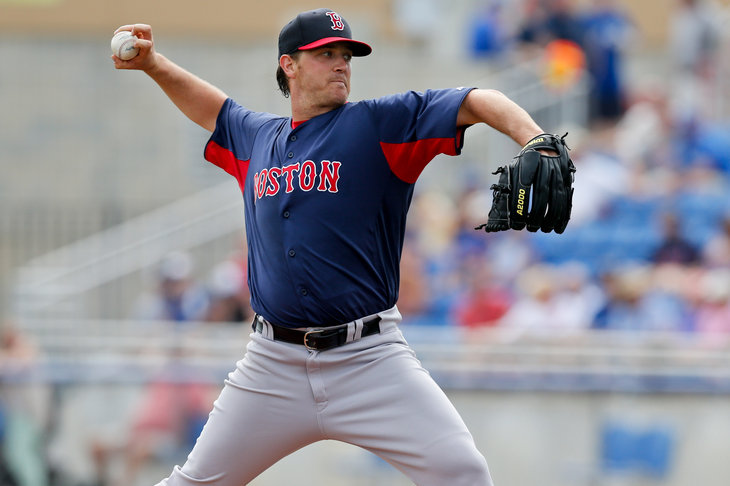 Steven Wright is intriguing, but as a knuckler, it's going to be tough to know he's good until he proves it one way or the other

The knuckler might only be up for the duration of Hanrahan's DL stint, lest his problem turn out to be more significant than initially believed. Given that you won't know if a knuckler is effective until they consistently succeed against big-league pitching, however, even a short call-up -- his first -- could do big things for Wright's career.

As for Hanrahan, he has struggled in his brief time with the Red Sox, supposedly due to a mechanical issue with his leg that was caused by the hamstring injury. He'll now have time to work on fixing his mechanics while he's on the disabled list, and possibly with a rehab assignment in order to pitch in games that don't count in the standings as well.

As he's already on the 40-man roster, no move other than pushing Hanrahan to the 15-day disabled list is necessary to get Wright on the team.