Do we want to read about baseball now?

If not, we all will soon

Share All sharing options for: Do we want to read about baseball now?

Do we want to read about baseball now? I honestly don't know.

But at the very same time I don't want to hear anything about it. I don't want to be reminded of the pain, the confusion, and the death. I'd rather avoid those things, think about puppies and rainbows, or more likely, nothing at all. I haven't yet been able to stomach the idea of watching the Boston Globe's video of the explosions at the finish line. Each time I got up the stomach to go on to Twitter, even though 19 out of 20 tweets are about how and where to find loved ones, phone numbers to call to give blood or offer a hand, or just sad condolences, prayers, and thoughts offered to the universe in the hopes positive thoughts will descend from the heavens like a blanket to cover the shoulders of those in need, there is that one tweet that seems to run against the grain, fingernails on a chalkboard, and I'm too weak right now to stomach it.

I want things to go back to the way they were at 4:08 on the marathon clock. The weather was perfect, the Red Sox had just walked off, and the marathon was the same annual exhibit of the beauty of sport that it is each Patriots' Day. Then a second passed and terror and horror and pain happened. While the few repulsive people who planned and implemented the bombing weigh on my spirit, the literally millions who have and are working vehemently against them, responding positively, with prayers, blood, speed, thoughts, sweat, and love in effort to undo their evil, lift me up with their essential humanity.

What does this all have to do with baseball? Nothing and everything. The bombings were at a public sporting event, not unlike the thousands of Major League Baseball games held each year. How can we all feel safe attending a game? How can we feel safe going to a football game, or a tennis match? I don't have an answer, but I know we will again even if we don't now. I know because we have been through catastrophes before, mourned, grieved, and come out the other side. 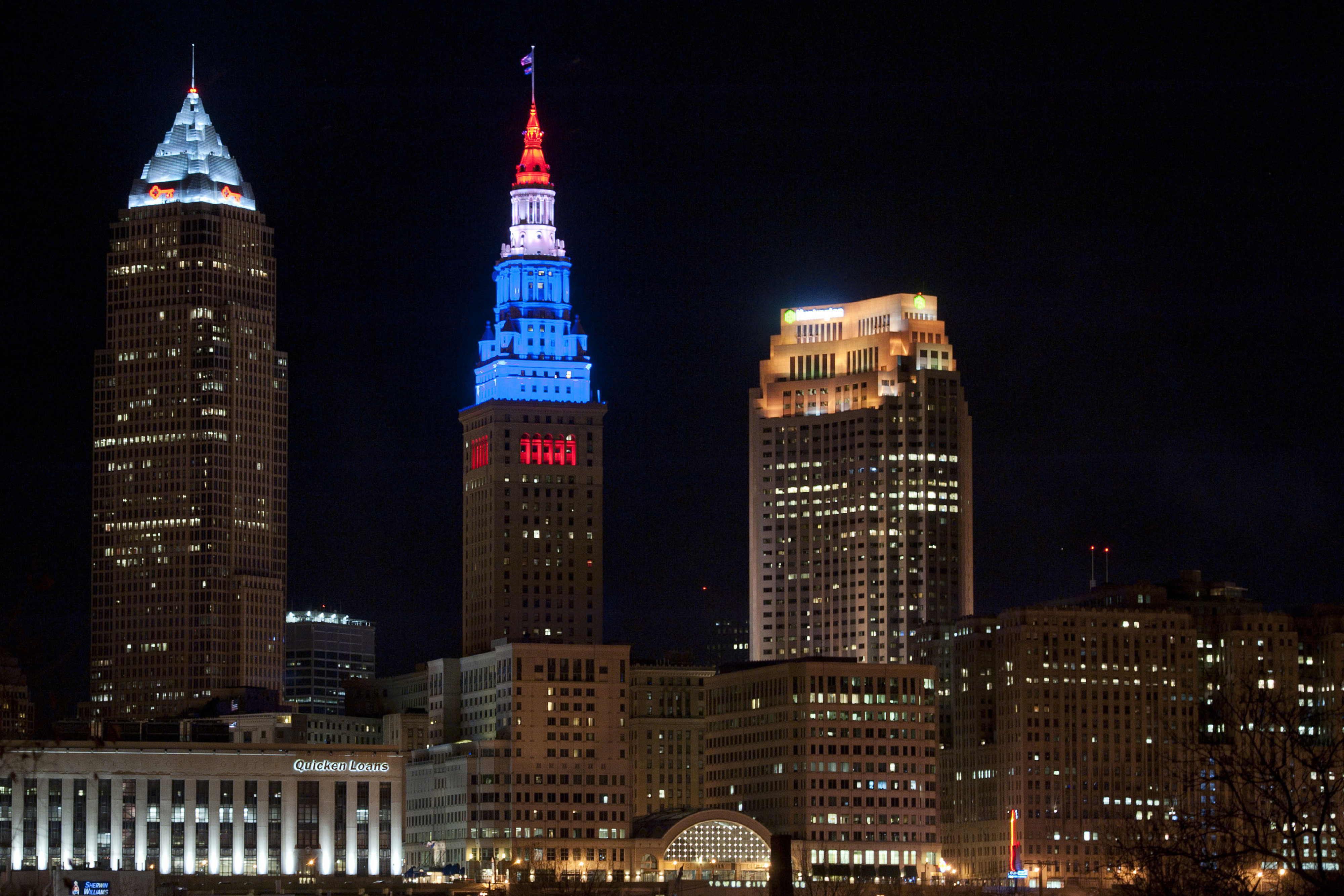 Cleveland's Terminal Tower, lit in the flag's colors, in support of the victims of the Boston Marathon bombing (Photo credit: USA TODAY Sports)

A few months ago people driving around in Russia saw a meteor split the sky with light and felt the earth shake as it smashed into frozen dirt from miles away. There are threats so numerous it seems that they can't all be counted, let alone stopped. But, crazy as it may seem right now, that is no reason to hide, to pull back from life. It's a point that has been made many times before but by doing that we give in to the fear and hand it control over our lives. Some say that's what those who perpetrate these attacks want, and maybe it is. I don't care a whit what they want want. I care what we want, and I care for the lives we have and the people we love and, yes, the games that give our free time meaning and lift up our spirits. Though we can't control the wicked work of others, we can control its effects on ourselves.

The person or people who perpetrated this attack on Boston, and on America, and really, the world given the event, will hopefully be caught and punished. But we have the power to deliver a great punishment ourselves. We can turn our backs to the fear they want us to feel, ignore the hate and division they wish we'd succumb to, and embrace the great society we've built for ourselves.

The Red Sox sold out every baseball game at Fenway Park from May 2003 to this past week. This coming Friday, the 19th they return home to face the Kansas City Royals. The biggest middle finger to the people who set up the Patriots' Day bombings would be to sell out Fenway on that day. There will surely be a moment of silence where we remember those who died and those who fought heroically so that others would be saved, safe, and sheltered. Observe it, then buy yourself a beer and a hot dog, yell "Go Sox" (or "Go Royals," whatever suits you) and enjoy the day.

We may not want to read about baseball now, but someday soon we will. Why? Because baseball is about enjoying the many pursuits of life. It's about athletic achievement, strategy, strength, planning, cities, people, courage, guts, technology, aesthetics, and history. But most importantly right now, it's one of the things that separate us from the those who tried and failed to destroy the Boston Marathon, the city of Boston, and the spirit of Bostonians everywhere. Baseball won't save us, and it can't protect us, but it can help us heal. So maybe tomorrow I will read about baseball. I hope so.