He was tossed out at first, and is rightfully angry, but maybe it was just karma at work

Share All sharing options for: Evan Longoria not pleased with Angel Hernandez's call

In Monday's Patriots' Day contest at Fenway Park, Evan Longoria came up in a situation with runners on the corner, two outs, and Ryan Dempster on the mound. The score was just 2-1 Red Sox at the time, and this was Tampa Bay's best chance of the game to tie up the contest. That is, until Stephen Drew made a pretty play that made the Fenway faithful temporarily forget about Jose Iglesias' glove:

The thing is -- and you can kind of see it from the gif above -- is that Longoria was safe at first. Longoria, to his credit, makes everyone around him aware of this fact immediately:

Amazingly, first base umpire Angel Hernandez didn't eject Longoria for the helmet slam, but did point at him to let him he disapproved. This did stop the Rays' rally, but, in reality, it simply brought balance back to the universe. 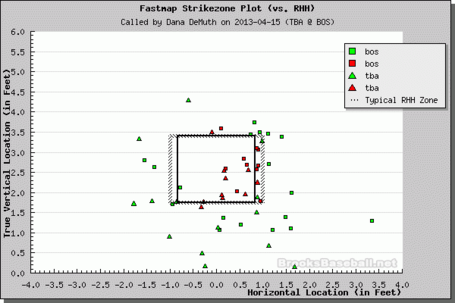 See that solitary green square on the left? That's a ball called to Longoria in his at-bat prior to the ground out to Drew, that should have been a strike not only in your standard strike zone, but also in Dana DeMuth's extra wide and tall zone. For once, Angel Hernandez doing a poor job of things actually managed to bring balance to a baseball game.