The Exciting Adventures of Jon Lester and Clay Buchholz

We're eleven games in, the top two starters have each gotten three starts, and man do they look impressive.

Share All sharing options for: The Exciting Adventures of Jon Lester and Clay Buchholz

Your Boston Red Sox, after two weeks of baseball, stand alone in first place in the American League East. Their record of 7-4 is the second best in the AL, behind only Oakland's 9-4. It's a lovely contrast from last year, when it took the Sox until April 25 to record their seventh win. We're about three days from a landslide of "Boston is April's surprise team!" columns, which we around here will read with amusement while reflecting on three months of offseason "no, really, they're going to be pretty good this year" columns.

Every columnist around, of course, picked the Sox to finish either in the basement or near it. And while most of us writing a bit closer to the team didn't go so far as to pick them as division champs (Except our Mr. Kory, who did so over at Baseball Prospectus. If they win the division, we all owe Matt a beer.), we were more bullish in general. We remembered that the team that lost 93 games was still hovering near .500 until about mid-August, and only totally collapsed after the Punto trade. That helped create a bit more hope, but we still weren't ready to declare Boston a surprise playoff team. Everything hinged on two guys: Jon Lester and Clay Buchholz.

Boston's 11 games into the season, and six of those games have been started by the Sox' top two. In those six starts, Lester and Buchholz have given up a combined four runs. That's not a typo. It is, however, a 0.88 ERA. They've struck out a batter an inning. Buchholz has walked ten so far, a bit worrisome, while Lester has only walked three. Through the first two weeks of the season, they've been the dominant top two in baseball. So what does that do for the Sox going forward?

First, of course, we must acknowledge the obvious. Clay Buchholz will not have a 0.41 ERA forever. I mean, I really would love to see him try to keep it under one, but it's not going to happen. Jon Lester will, at some point, have a start where the cutter simply doesn't cut right and a few leave the yard. Their numbers will regress, and their lines will become slightly less cartoonish. The question is where those numbers will regress to. Will it be last year's? That would basically spell disaster for Boston. Will it be to their career lines? This would be great in Lester's case, more of a mixed bag for Buchholz.

Jon Lester, from 2008-2011, was one of the best pitchers in the game. He put up a 3.33 ERA in over 800 innings, striking out 784 batters. The debates around Boston centered on when he'd win a Cy Young, when he'd pass 100 victories in a Sox uniform, whether he'd rank with Lefty Grove and Babe Ruth as one of the great southpaws in team history. Last year saw a complete turnaround, as we worried that he'd somehow peaked too soon, or cracked under the pressure of this city's absurd expectations. Looking back a bit, it's kind of astounding we gave up on him so quickly. 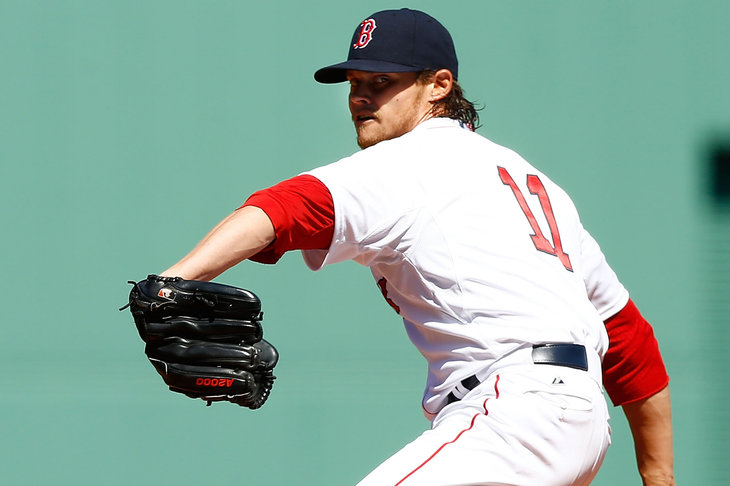 Clay Buchholz is a different matter. His results have never been consistent or predictable. Sometimes it's great results with worrisome peripherals, as with his 2010 campaign. In that year, he put up a 2.33 ERA over 173 innings, but he did so with a Twins-level strikeout rate. Sometimes it's injury, as with his shortened 2011 season or his back issues during last year's run to the basement. But his stuff is simply the best on the roster. Every pitch he throws is a potential out pitch, as we saw to impressive effect yesterday. The pitch arsenal we dreamed on when he was in the minors, and when we saw him throw a no-hitter in his second start, has always been there. It's just never been fully unlocked.

So far this season, both have looked like world-beaters, like the sort of pitching duo that can carry a team all year and well into October. The rest of the pitching staff has been pretty damn good, too. They've only given up 32 runs, the best in the AL. No Boston starter has given up more than three runs yet. So far this season, of course, is eleven games. But those eleven games have forced the rest of the league to worry about Boston, and the parties most responsible for that worry are Lester and Buchholz.