Carlos Quentin broke Zack Greinke's collarbone, and the slap-on-the-wrist that is likely to follow will fix nothing.

Share All sharing options for: On Carlos Quentin, baseball brawls, and culpability

Carlos Quentin gets hit a lot. He doesn't get hit a lot because he's the best player on his team, or because he ticks off opposing pitchers. He gets hit a lot because he crowds the plate, and when the ball's coming in, he doesn't make much of an effort to get away. He demands that the inside part of the plate is his, and if a pitcher tries to claim it, consequences be damned. This is why he leads the league in HBP since 2008.

Except for some reason he seems to think Zack Greinke is out to get him. Never mind that multiple other pitchers have hit Quentin as many times as Greinke. Never mind that it was a one-run game, there were zero outs in the inning, and Greinke had already thrown him enough pitches in that plate appearance to get to a full count. Either it was Greinke, so it was personal, or this is just a matter of Quentin being too hotheaded not to charge when he gets hit, which isn't really backed up by history and by itself is pretty condemnable to begin with. Either way, out he went, and down went Greinke. 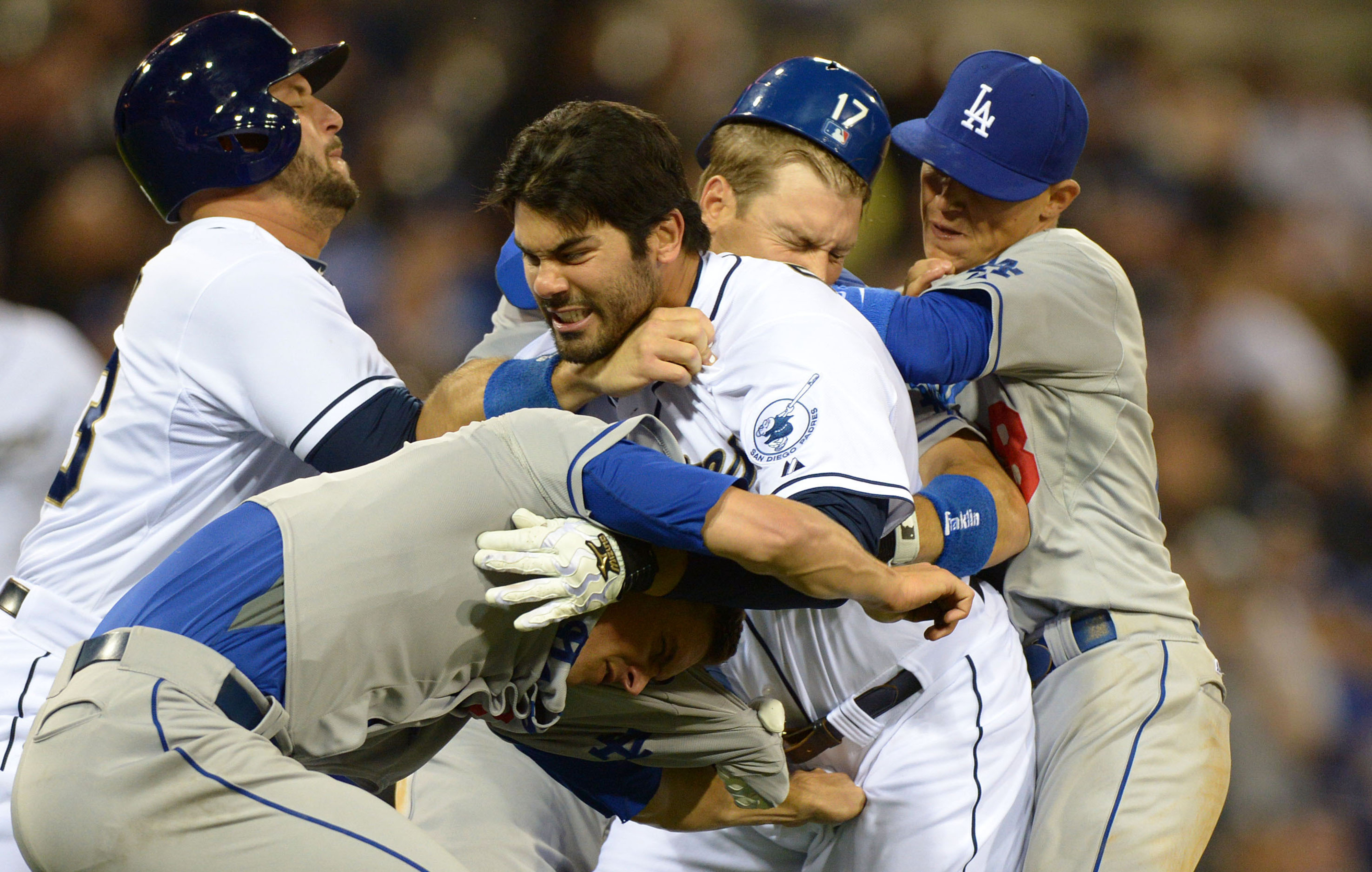 I say all this to establish that it was an unprovoked attack. Unintentional plunkings are something a batter accepts as part of the game by stepping into the batter's box. It's in the pitcher's best interest to throw the ball inside sometimes, and since players are not perfect machines, it's always possible to have that ball miss by a few inches and catch someone's ribs. And, no, whatever Greinke said to Quentin doesn't count as provocation, though to my untrained eyes it seemed to end with "please" or "base" followed shortly by an expletive when Quentin begins to charge.

For some strange reason, what happens in a ballpark is insulated from the realities of the outside world. Going headhunting with a ball in real life wouldn't be acceptable, and neither would Carlos Quentin's actions from last night. It's a fine line between a fight and an assault, but to appropriate a phrase from late Supreme Court justice Potter Stewart, I know it when I see it. What I saw last night does not sit well with me. These aren't two guys who clearly want to have it out. It's one guy with an imaginary grievance and another who kind of just wants be somewhere else. The latter ends up with a broken collarbone. It doesn't feel like a fight. It feels like an attack. And it doesn't feel like something the league should respond to with the same slap-on-the-wrist suspension it always does.

It's true that the only reason the baseball world is making such a big deal over this is because of the resulting injury. But it shouldn't be. We're lucky, frankly, that we don't see stuff like this more often. It does happen, though. Jason LaRue was forced into early retirement when Johnny Cueto kicked him in the head in 2010. By continuing to ignore this sort of thing until the worst happens, Major League Baseball is ensuring that it's only so long before someone beans a guy in the head, or lands a particularly well-placed punch, and makes a broken collarbone look like a minor inconvenience.

Carlos Quentin has cost the Dodgers millions of dollars, and Greinke a pretty fair deal of pain. He should be held accountable. If the league won't take action, individual teams have to, if only to avoid ending up on the wrong end of things when some random guy on the other side takes it upon himself to knock their star out for months on end.