Just when you thought it was safe to go back to Fenway, Alfredo Aceves gets the start...

After suffering a crushing ninth-inning defeat Wednesday night, the Red Sox stick with their same starting nine as they look to avoid their first series loss of the year. 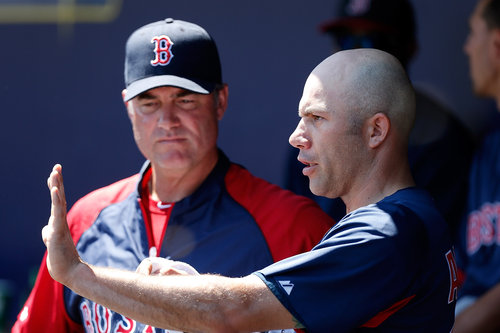 The Red Sox have been forced to turn to Alfredo Aceves for a start. What can he give them in the rotation?

Unfortunately, it's not so much the lineup that matters tonight as the man on the mound: Alfredo Aceves. Somehow sticking with the team despite his terrible performance and attitude during the 2012 season, Aceves has had a start fall into his lap thanks to John Laceky's injury.

Aceves is not a very good pitcher. His 2011 season was fine, but fluky, and the rest of his career is underwhelming on the whole. However mediocre he is as a reliever, however, he's just plain frightening as a starter. And not just in a "this guy could give up eight" sort of way, but a "this guy could kill someone on the other team" sort of way.

Chris Tillman isn't exactly anything to write home about, but tonight he holds the distinct advantage of not being Alfredo Aceves. Those lucky Orioles.