The Red Sox might not want to use Aceves as a starter, but he's their current option this early in the season

Share All sharing options for: Alfredo Aceves, the Red Sox, and starting pitching

Can Alfredo Aceves start? This question is sure to elicit responses like "absolutely not!" and "probably no" and "I hate that guy why isn't he designated yet?" But sadly, Aceves just hasn't started enough for us to know whether he can do the job. We have plenty of hints that suggest he can't, or at least can't do it well, but he hasn't done enough in the role in the majors for us to know for sure if he can't even hack it as a spot starter in time of injury.

In a related story, Alfredo Aceves will make his first start of the season on Thursday for the Red Sox, in place of John Lackey, who is on the disabled list for biceps inflammation. We'll have a little more evidence -- or confusion -- on the matter by the end of the night.

Aceves hasn't started with the Red Sox since June 21, 2011, against the San Diego Padres. In his career, he has just nine starts. He's managed a 4.18 ERA in those 47-1/3 innings (not bad!), but also has barely struck out more hitters than he's walked (not good!). This is even more striking when you consider his strikeout-to-walk ratio as a reliever, in 281 innings, is 2.7.

However, Aceves started quite a bit in the minors, too -- 98 of his 145 games on the farm were starts -- and he managed a 2.6 K/BB and 3.75 ERA overall in those 648 developmental frames. The majors aren't the minors, of course, but it's possible Aceves just hasn't pitched enough in the majors as a starter to work out his issues against big-league hitters in that role.

Is that definitely why he hasn't been as good as a starter? Not at all, as there are concerns about his command and approach as a starter that haven't shown up in his (good) relief work. The whole thing that made Aceves useful prior to 2012 was his ability to pound the lower portions of the strike zone with quality strikes. He hasn't been able to do that as a starter, as it's the one place where his control is problematic -- as a closer, it was more his command that became an issue, by way of increased velocity. Like with the closer role, Acevese just might not be starting pitcher material in the bigs. Maybe he's only good at one very specific thing. 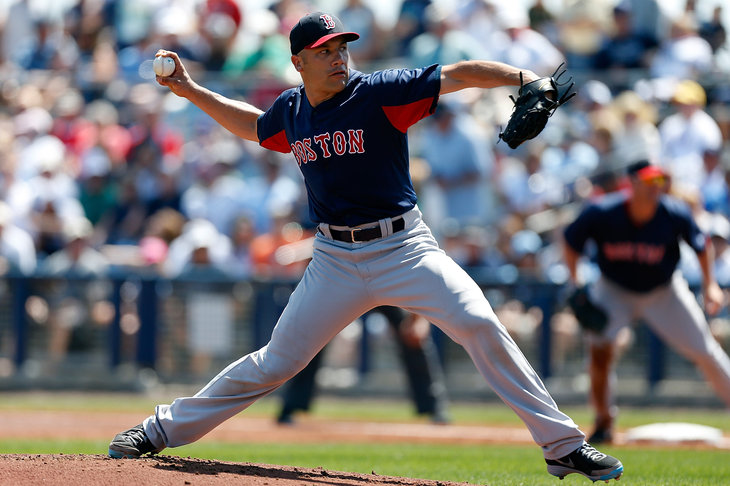 Aceves is something of a mystery, and the own key to unlocking his utility

Maybe, though, there's a happy medium to be found here. Part of Aceves' issue of late is that he lacks command of his stuff when he throws his hardest. When he tossed 90 innings in relief in 2011, he was working in the low-90s, focusing more on command than blowing it by the opposition. In a starting role, given he's not just coming in for an inning or two to give it all he's got, he might slide back to the low-90s once more, and stop leaving so many fat pitches out over the plate that are just begging to be deposited over the wall.

That's a definite possibility, and would remove part of Aceves' recent issues, but it still doesn't get rid of the control problems he has had as a starter in the majors. If he can get through those without causing too much damage, though, as he has in his previous nine starts, the Red Sox offense and bullpen should be able to pick the team up the rest of the way. He might not be a legitimate starting pitching who can stick in a major-league rotation, but there's still the chance he can do his job as occasional depth.

And hey, if he can't hack it in this role, and he doesn't work as a closer, and he's no longer a viable relief option, then all of a sudden there's little reason for him to be on the 40-man anymore. So, one way or another, this April stretch could answer some important Alfredo Aceves questions.