The Red Sox system is awfully full of shortstops right now. Will the positional logjams force them into awkward moves?

Having sent Jose Iglesias back to the minor leagues on Wednesday to make room for Stephen Drew, the Red Sox seem to have the left side of their infield figured out. Iglesias will keep working in Triple-A unless Drew proves he can't bring anything to the team, and Will Middlebrooks will, of course, keep right on rolling at third base.

Things might not be so cut and dry for too much longer, though. Right behind Jose Iglesias at Double-A Portland is Xander Bogaerts, considered by most to be the best prospect in Boston's system. Behind him is last year's first round pick, Deven Marrero. Both of them shortstops, each expected to be pushing at the next level before too long.

That means that not too long from now, the Sox could be looking at three players for one position.

It's a concern that has left a lot of fans wondering how exactly the team should deal with it. Is it time to move Bogaerts, who many expect will outgrow shortstop, to third base? But then what of Will Middlebrooks? Does he play first? How about Deven Marrero? If Iglesias looks like he can hit well enough to start in the majors, shouldn't the Red Sox trade him? There's been a lot of talk, a lot of suggestions, but really none of it is necessary. 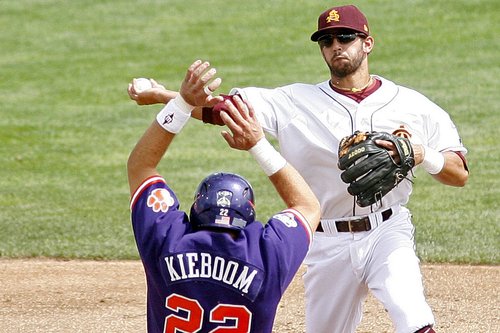 Deven Marrero skips a level, but is he ready?

First thing first: none of these players have actually proven themselves at the major league level. Right now, all these concerns are based on the hypothetical and, frankly, unlikely event that each one is worth a starting spot on a team that very much needs to consider itself a first division contender. Yes, Iglesias is very near to being worth that spot based on his glove alone. Yes, many expect that Xander Bogaerts will find his way to All-Star games down the line. Yes, Deven Marrero hits that nice note in between the offensive extreme of Bogaerts and defensive extreme of Iglesias. But until they've done it consistently at the major league level, they're a giant question mark. At the moment, the Red Sox have zero shortstops for 2014, 2015, and 2016, not three

Alright, so let's just go ahead and imagine that we knew for certain that two of them would make it. Just to make it more interesting, let's say it's Iglesias and Marrero that can cut it, since Bogaerts' situation is more easily solved with a potential jump to the outfield. Now does it make sense to start talking about Marrero as a third baseman and Will Middlebrooks as a first baseman?

No! Because no matter how you look at it, right up until the move is imminent, that's just a waste of value. A shortstop prospect with a decent bat and good glove is usually going to be viewed a lot higher than a third base prospect with a fringe-average bat and great glove for the position. Yes, it's the same player either way, but the first glance will not be nearly so impressive, and other organizations will be wondering if the Red Sox had a reason to believe that Marrero couldn't cut it at short.

Even if Marrero is pushing the majors as a shortstop while Iglesias and Middlebrooks sit entrenched at their positions, chances are the Red Sox would just be better off dealing Marrero as a shortstop prospect to get help wherever they need it.

In the end, what it comes down to is value, and taking players away from their natural positions to play at less demanding and less valuable areas is a risk with very little upside to it. It's not a problem the team has to think about right now. It's probably not one they have to think about for a while to come. But should the situation ever arise, it's probably best not to try to fit square pieces into round holes.