Fifty-dollar tickets and fifty-cent narratives: The end of the Red Sox sellout streak

Apparently some sort of ticket-sales thing happened last night, so let's dissect it.

Share All sharing options for: Fifty-dollar tickets and fifty-cent narratives: The end of the Red Sox sellout streak

Today, gentles, we gather together to lay to rest the latest in a long line of lazy Red Sox narratives. To your left, you will see the Tomb of the Curse, to your right the Chicken and Beer Memorial. Into this hallowed ground, we now lay the Fake Sellout Streak. Remember it well, recall with each step out of this place the dozens of poorly written columns it gave life to, the hundreds and thousands of hacky tweets it made possible. The Fake Streak will live on in our hearts, so long as there is cheap humor, so long as lazy writers have deadlines to meet. Thank you all, and Ted bless.

Last night was, of course, the first time since 2003 that the Red Sox didn't sell every seat in the house. As Matt Collins pointed out wonderfully before the game, that's a hell of a thing. Including playoff games (of which there were 26 over that span, a pretty respectable number), the Sox sold every ticket they had for 820 games. They did so with the highest prices, the most uncomfortable seats, and the strangest sightlines in the majors. Throw in the weather we tend to see around here in April and September, and selling out ten straight seasons becomes flat-out absurd.

Of course, despite selling every ticket in the box office for ten straight years, there wasn't an ass in every seat for ten straight years. And I know, personally, that there wasn't an ass in every seat, because on at least two occasions over that span I had tickets that I couldn't use. So by the "ass in seat" standard, even though I really only have half a normal-sized human ass, those weren't sellouts. And here's where it becomes incredibly weird. This matters, apparently. It didn't matter in 2005, of course. Didn't matter in 2009. It started mattering at the end of 2011. 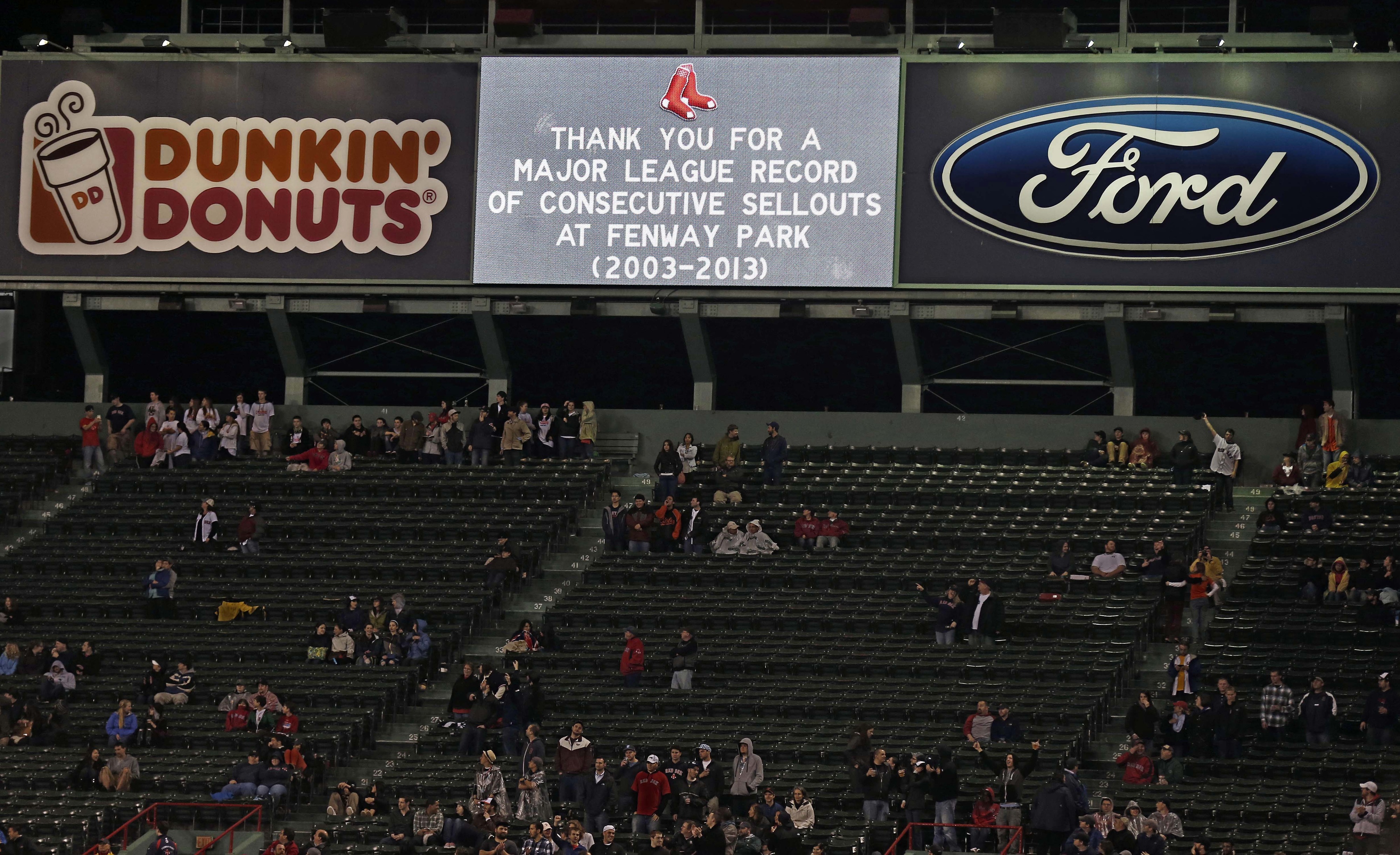 That the sellout streak was based on sales and not attendance has always, always been clear. Honestly, I'm not sure how anyone could have thought otherwise. What matters to any business, ever, is sales. I, like most of you, work for a company that creates a commercial product. Certainly, we hope people will consume and enjoy that product. But it doesn't matter too much for the bottom line. Once it's purchased, that money is in the bank, and the rest is gravy. It's the same deal for a sports franchise. And here's where I'm going to say something horrifying, something that will most likely kill a bald eagle and make babies cry. Sports franchises are in it for the money. Once a ticket is sold, and that money is on its way to Dustin Pedroia's sasquatch-hunting fund, it doesn't really matter whether the guy who bought it shows up. Sure, it's a few lost beer sales, and the empty seats might not look great on TV (if they're right behind the plate), but that's it.

So let's think for a moment about what the Red Sox actually did by claiming a sellout every night last year, despite entire rows being empty. Who were they actually defrauding? Basically just their advertisers, right? Sure, MLB gave them the continuous sellout record, but they'd gotten that well before last year, and as previously mentioned, it was already in the strictest sense not true. The only ones even theoretically losing out were advertisers who'd been told their in-stadium ads would be seen by 37,400 people but were only seen by 32,000. And I can understand why local media members would be pissed about that. After all, that'd be like writing a thousand-word story but separating it into a fifteen-page slideshow to gain clicks. What kind of horrible cheat would do such a thing?

The "sellout streak" became an issue for one very simple reason. The same reason clubhouse beer became an issue. The same reason Sweet Caroline became an issue. The Red Sox sucked last year, and we needed a cudgel. Kevin Millar led the '04 team in pregame whiskey shots during the playoffs, and no one cared. Hell, we thought it was endearing. Every fan in the joint sang their lungs out every eighth inning in 2007, and we thought it was cute. What changed was a 7-20 September 2011, a Dan Johnson home run, and a 69-93 2012. That's it.

That sounds dismissive, and obviously I don't want to downplay how awful that season and change was to go through, and not just because we'd been relatively spoiled of late. The decision-making process that had won two World Series titles and cemented the Sox in the top echelon of MLB franchises clearly went seriously awry. But it didn't have anything to do with a sellout streak. If anything, it appears it had to do with the torch-and-pitchfork mentality that's spent the winter attacking it. The worst and/or most flexibility-killing moves of the last several years seemed to be driven by outside pressure. The pressure to perform, to give the fans a perfect product every single year. The pressure that might well drive a team to say they've sold every ticket even though the fans aren't showing up.

The Red Sox' sellout streak was far from an embarrassment 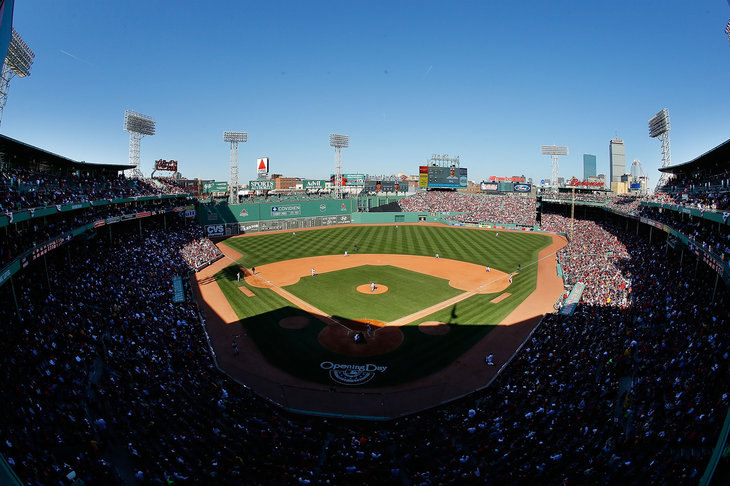 Recently, all talk of the sellout streak at Fenway Park has been surrounded by negativity. However, it was truly an incredible accomplishment that everyone who was involved should take pride in.

The current Red Sox ownership didn't defraud an entire city in order to double the value of their franchise with a gaudy new stadium. They didn't collude with other owners to keep free agent prices down (obviously). They didn't break campaign finance laws to donate to a less-than-ethical president. They said something in public that was technically true but clearly disingenuous. Something that wouldn't have mattered if Jonathan Papelbon had struck out Robert Andino 19 months ago. They made a bit of extra money, and maybe didn't care about twisting the facts to do it. But it's silly to be mad at them for making a few extra bucks when you could be mad at them for using those extra bucks on Bobby Jenks.

And that's what really kills me here. If someone actually wants to sit down, do the research, the phone-working, and the record-hunting that would reveal all the missteps this ownership group has made, I'd be really interested to read that. Sure, they've overseen two world championships, multiple playoff berths, astonishing profits, and haven't managed to drive off any eventual Hall of Famers with racist slurs, but hey, I'm a student of history and a liberal. I want to know the bad with the good, so it can be fixed. Everyone has that friend, or that co-worker, who spends all their time pointing out problems but never proposing solutions, That's what making fun of a sellout streak is. It's not journalism. Hell, it's not even writing. It's shrugging at an audience while saying "The government, am I right?" Safe, quick laughs with no substance, no analysis, just a vague shape that people can be mad toward.

So here's to the end of that sellout streak. The tickets it sold allowed Boston to sign Adrian Beltre and Keith Foulke, to trade for Curt Schilling and Josh Beckett, to extend Dustin Pedroia and Jon Lester. It allowed Fenway to be renovated for the next three decades, and the next crop of Red Sox stars to be drafted. It died so that another can begin, and so, hopefully, smarter critiques can be written. Long experience has taught me that the former should happen very soon, but the latter could be years away.