The Red Sox' sellout streak was far from an embarrassment

Recently, all talk of the sellout streak at Fenway Park has been surrounded by negativity. However, it was truly an incredible accomplishment that everyone who was involved should take pride in.

Share All sharing options for: The Red Sox' sellout streak was far from an embarrassment

For those of us who weren't around for the infamous ’86 World Series, 2003 was our rite of passage into true Red Sox fandom. In a classic ALCS against the Yankees, Boston eventually lost in the extra innings of Game Seven after a walk-off home run from Aaron Freakin’ Boone. Of course, the very next year the Red Sox beat those same Yankees in an ALCS we won’t soon forget, and went on to win their first World Series since 1918. To me, the past decade of Red Sox baseball has been the greatest era any of us has ever seen for this franchise, and it all got started in 2003. You know what else started in 2003? Everybody’s favorite sellout streak.

As they say, all good things must come to an end, and the same goes for the streak. After selling out 794 consecutive games at Fenway (it’s 820 if you count the postseason), all signs are pointing towards the streak finally concluding tonight. The last time the team was unable to sell out a game was on May 14th, 2003, close to ten years ago. On that day, X2: X-Men United was the number one movie at the box office, and 50 Cent’s In Da Club was unseated atop the Billboard charts by Sean Paul’s Get Busy. (Man, music was pretty atrocious back then.) Which ever way you slice it, the longevity of this streak, the longest in the league's history, is quite incredible 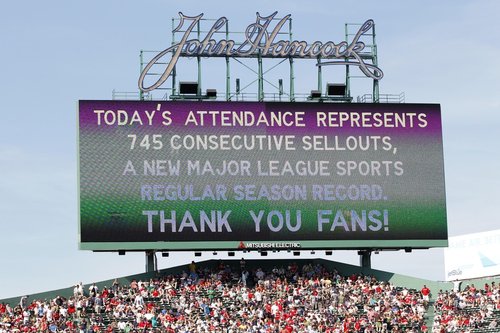 For some a mark of pride, for others a nagging annoyance. No matter your opinion, the sellout streak will soon end.

Now, it would be impossible to discuss this streak without at least mentioning the ridicule that has surrounded it the past year or so. Led by the likes of Michael Felger and other media personalities, this streak has become the butt of every joke for multiple reasons. One reason I hear frequently is that the stadium is small. While that’s true - Fenway’s maximum capacity of 37,499 is the fourth smallest in all of baseball - that’s not the team’s fault. They sold the tickets that they had available.

In addition to that, a much more vocal crowd has used this streak to perpetuate the narrative against this ownership group. Just add it to the list of things to complain about, right next to the Fenway bricks and Sweet Caroline. Perhaps the streak should have ended a few months earlier, but it is in no way a knock on the owners. In fact, it’s quite the opposite.

Think back to last season’s Opening Night on ESPN, where they unveiled Miami’s new park, filled with some ridiculous attractions. Just one year after opening, they are already having trouble selling tickets, mostly due to having the worst owner in all of sports. On top of that, they are one of the three teams with a smaller park than Fenway. Comparing Miami’s baseball fans to Boston’s is, generally speaking, like comparing Nick Punto to Manny Ramirez, but it still illustrates how tough it is to keep a fanbase’s interest for such an extended period of time.

Additionally, the Red Sox were still among the elite teams for attendance, even without accounting for park size. Boston finished seventh in the league with an average attendance of 37,400 last season. They most likely would have finished higher had there been more seats available. Also, they were one of three teams, along with Philadelphia and San Francisco, to average at least 99% capacity last season. As Boston fans, many of us like to talk up our fellow fans as the best, most passionate in the entire country. This streak should be a major part of that argument, not something to be ashamed of.

As was stated at the top of the article, the start of the streak coincided with the beginning of a truly great era in this franchise’s history. It saw Pedro Martinez, Manny Ramirez in his prime, David Ortiz at his most-clutch, Dustin Pedroia winning Rookie of the Year and MVP in consecutive seasons, and Jacoby Ellsbury during his ridiculous 2011 campaign. It was still in its beginning stages for Game Four of the 2004 ALCS, which was a pretty decent night if I recall correctly. It was a bit more developed for the run in 2007, which is probably the best Red Sox team I’ve ever seen. Should it have ended at some point during last season? Probably, but that’s not the point.

Give it ten, twenty, or forty years, when you’re talking to your children/grandchildren/random youths at the park about this great era in the team’s history. Whether you like it or not, this streak is a major part of the legacy of this era, and every time you watch reruns of old games from 2004 or 2007, you will see a packed Fenway Park, filled to capacity with palpable excitement. Not to mention the fact that it was a major part in helping fund those great teams. Wednesday night, the streak will end, and with it a great era will also come to a close. This season has been about starting anew, and this is a part of that process. However, this streak was an incredible accomplishment for both the franchise and the city, and it’s something we should take pride in for the rest of the time we root for this team.