Will David Ortiz's Achilles and heel injury be a problem even after he comes back from the disabled list? This is the question Evan Drellich posed at MassLive.com, and, after talking with medical experts, the answer is, "maybe." That's not super encouraging, but with a little context, it can get there:

Dr. Jockel is a foot and ankle specialist at Tufts, and from what he says it seems like Ortiz's problem is going to be reminiscent of, say, Albert Pujols and his plantar fasciitis. If the pain is gone, or at least manageable, than Ortiz should be fine. But that's not the same as having the problem go away, and the chance is there that it comes back to haunt him down the road.

Ortiz's contract is designed to account for that possibility, however. The Red Sox don't get a total discount on him if he misses significant 2013 time, but the more time he misses in 2013, the cheaper he'll be next year. As Rob Bradford reported back in November, when Ortiz signed his deal, Ortiz's base salary for 2014 is $11 million. If he is on the disabled list for 20 or fewer days in 2013, he'll make $15 million instead, but if he misses 21-40 days while on the DL, that is dropped to $13 million. Should he miss even more time than that, then it's just his base salary of $11 million that he'll pull in. 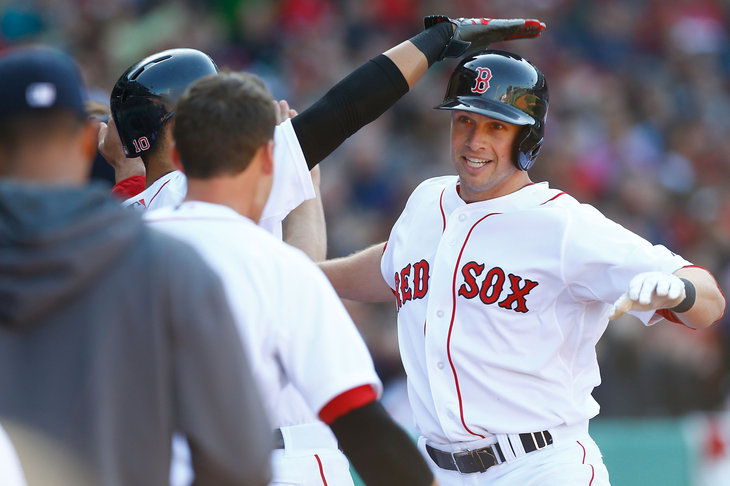 The Red Sox might face a tough decision on whether or not to send Jackie Bradley Jr. down when David Ortiz returns. After one week of baseball, though, the choice is looking pretty easy.

As Drellich points out, Ortiz was placed on the disabled list on March 31, when the Red Sox had to finalize their Opening Day roster, meaning April 19 is the latest he can come back and still be eligible for the full payout. Boston opens up a 10-game home stand with a three-game set against the Royals on that day, at the same time the Pawtucket Red Sox, who Ortiz should be rehabbing with at that point, are about to head on the road, so it's a convenient place for him to return to both in terms of travel and appropriate playing time to work his way back.

That would mean he's still in line to make $15 million next year, but another stint on the DL, even at the minimum 15 days, would cut him down to just $13 million next season. Should he be disabled longer than the minimum, he risks losing out on $4 million in 2014 earnings.

How will Ortiz perform? It all depends on what kind of pain he's in. If the pain is gone, and the condition persists, he should be able to hit and run like the Ortiz the Red Sox needed to re-sign. With any luck, things won't escalate in-season, and Ortiz will be able to get through this without further incident. That's no guarantee, though, not with a tricky injury like this one.