Jose Iglesias is headed to Pawtucket after a brief-but-glorious run in the majors, making way for the returning Stephen Drew.

According to Maureen Mullen, the Red Sox have optioned shortstop Jose Iglesias to Triple-A Pawtucket, activating Stephen Drew from the seven-day disabled list. Drew was injured early in spring training when a pitch to the helmet left him concussed.

It was a brief but glorious run for Jose Iglesias in the major leagues. Widely known as a brilliant glove with no bat attached, the young Iglesias took the opportunity to hit .450/.476/.550 in six games, taking just 21 plate appearances to outdo his hit total from 68 plate appearances in 2012. Of course, an unusual number of those hits came on the infield grass, but some of that was a result of Iglesias' ability to bunt, and part of it due to his speed on the basepaths. Above all else, he just looked more comfortable against major league pitching than he had before. There were obvious signs of improvement even ignoring the results.

Of course, he was still his usual amazing self with the glove, too. Case in point:

Should a healthy Stephen Drew start over Jose Iglesias? 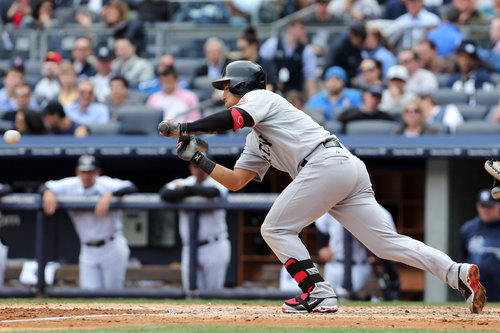 The situation with Jose Iglesias and Stephen Drew is not your typical veteran - rookie scenario.

Still, it was obvious that when Stephen Drew was ready to come up, Jose Iglesias would go down. The simple fact is that you don't let a player with the upside of Drew languish on the bench without seeing if he can play like he did back in the days he was healthy. You also don't leave Iglesias to rust for what it's worth, so the team couldn't simply cut Pedro Ciriaco or Mike Carp and stick him on the bench.

The good news for Iglesias fans is that he's still just a short bus ride away, and if Stephen Drew doesn't prove himself capable of producing, the Red Sox will not wait too long to give Iglesias the call. His glove alone makes him worthy to play at the major-league level, and if he can keep even just some small portion of the production he's managed so far at the plate, he's going to be quite the player.