Clay Buchholz is off to an excellent start to the 2013 season. His cutter has been sharp, his change-up is back and he has even found a way to steal the first strike, often without so much as a swing.

Share All sharing options for: How Clay Buchholz steals the first strike

Clay Buchholz has made two starts so far this season, and he has been just about as good as any Red Sox fan could hope, winning both games and posting a 0.64 ERA over 14 innings. In his first game against the Yankees, he went seven innings, struck out four, walked two and allowed just one run, which came on a solo homer from Travis Hafner. He was even better against the Orioles in his second start, going another seven--this time scoreless--and punching out eight while allowing three hits and four walks. He is working quicker. His cutter has been excellent and his killer changeup is once again missing bats at an impressive rate. He has also found an ingenious way to steal the occasional first-pitch strike. 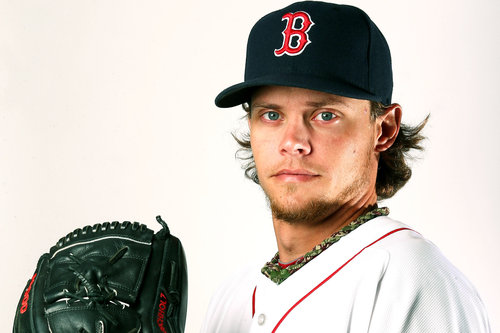 Boston needs Buchholz to have his change-up under control, but there's little reason to believe he won't.

Against the majority of hitters, Buhholz has led off with a four-seam fastball. Second to that, he has mixed cutters and the curve to start hitters off, throwing both around 17% of the time on the first pitch. This use of his curve caught my eye during his first outing. Out of 94 pitches, Buchholz threw thirteen curves. That is 13.8%, which is right in line with his career norm for the pitch. Of those thirteen curves, six came on the first pitch. Of the 28 batters he faced, he threw just over 20% a first pitch curve. Not one of these generated a swing and that was a big reason I decided to head over to Texas Leaguers to investigate. Of the six, two resulted in called strikes, but quick glance at the TL pitch F/X chart shows that two more were actually in the zone. In his second start, he used the pitch less frequently overall, throwing just ten curves in 113 pitches. He also used it as a first pitch less often, throwing it just three times to start off at-bats. The results were very similar, however. Batters took all three first pitch curves. This time Buchholz landed all three in zone.

This is not an entirely new trend for Buchholz. Last season, he threw a first pitch curve 17.3%, using it more to start hitters off then any pitch except his fastball. Prior to last year, however, this was not something he did very often. From 2008-2011, he used curves as the first pitch just 7.7% of the time. Given what we have seen in these first two games, it isn’t hard to understand why Buchholz has started leading with the curve more often. While the curve is not his best off-speed pitch, it is the one hitters are least likely to swing at. Hitters have swung at it 34.3% of the time over the course of his career, but as a first pitch, they swing even less, offering at it just 14.3% of the the time. Simply put, Buchholz can steal a first pitch strike with the curve six out of seven times, so long as he can put it in the zone. Even better, hitters who do chase are just as likely to miss the ball as they are to put it into play.

Of course, there is a danger to this strategy as well. A quick look at the location of the nine first-pitch curves Buchholz has thrown this year shows a very different pitch than the curve that he throws ahead in the count.

The 0-0 curve is a sneak attack strike. Buchholz knows hitters aren’t going to be swinging and he is simply looking to land the ball in the zone. Of the nine times he has tried this strategy, it has worked five times and he has gotten two bad calls against him. However, the pitches he has thrown have been pretty consistently near the heart of the zone. Five pitches have been at or above the middle of the zone vertically and five were within six inches of the middle horizontally. Essentially, these are hanging curveballs. A hitter sitting this pitch would stand a good chance of hitting it hard.

So far, that has not happened though. According to Brooks Baseball’s player card for Buchholz, 80% of first-pitch curves put in play last year resulted in ground balls and none resulted in home runs. The batting average on balls in play from this pitch was just .200. If hitters are sitting on this pitch, the strategy has not helped them to this point.

There is most likely a breaking point for how often Buchholz can drop in a first-pitch curve and still leave hitters staring blankly at it. If he picks his spots well, the pitch is a great way to get ahead in the count and set up both the more whiff-inducing version and his superior change. So far, he has made excellent use of this technique. As the season goes on, it will interesting to watch when and where this cunning technique comes out and how it (hopefully) contributes to his dominance.