What Red Sox fans have been waiting for since last season ended -- okay, since August 25 of last season, all hail the Punto trade -- is for Opening Day, 2013. A new roster with new faces, the return of a healthy Will Middlebrooks and David Ortiz -- well, we'll take one out of two for now -- and just, well, new. No one wants to remember 2012 for anything but the fact it resulted in the organization pressing reset then diving back into things head first with a new plan, new players, and hopefully, new outcomes.

Oddly, they'll get their first chance for "new" against the very last team they faced off against in 2012: the New York Yankees. While last time, we were secretly hoping for some losses to improve Boston's draft standing -- admit it, you were so rooting for a draft pick last October -- things have changed. New season, new standings, new, new, new.

Normally, you would see statistics for the pitchers somewhere around here, but hey, it's the first game of the season, and we've got nothing to share. Instead, we'll focus on their recent past. Lester struggled for much of 2012, but turned things around in his last 13 starts, posting a 3.92 ERA in that stretch while finally showing some semblance of his former command. Combine that with spring mechanics that look like those of the Lester of old -- and spring statistics that suggest, as much as spring stats can, that he's back to getting the job done -- and you've got reason to believe this year will be different.

As for Sabathia, he is also coming off of his most disappointing campaign with his current club, albeit nowhere near to the degree of Lester. Sabathia's "disappointing" season still resulted in a 124 ERA+, but thanks to "only" throwing 200 innings over 28 starts -- he averaged 235 frames in his first three seasons with the Yankees -- he failed to garner any Cy Young consideration. The Yankees are hoping he'll be healthy for all of 2013, as he had been in his other Bomber campaigns.

Buchholz might not seem like he stacks up against Kuroda if you just look at 2012, but then you'd be doing it wrong. Buchholz owns a 122 ERA+ since becoming a full-time starter in the majors in 2009, despite last year's disappointment. Of course, if you look a little closer at 2012, you see that, for the most part, he was actually great. After posting an 8.31 mark in his first seven starts as he shook off the rust from missing half of 2011, Buchholz 150 more innings with a 3.59 ERA, limited opponents to a 683 OPS, and posted a 2.6 strikeout-to-walk ratio that would have been been a career best if only those first seven starts could be expunged from the record. Like Lester, he had a strong spring both from a mechanical and statistics-based angle, and one hopes that means the early troubles of 2012 are a distant memory.

As for Kuroda, it didn't appear as if he would stick with New York for a second season, but he's back for one more year after receiving a $5 million raise for his age-38 season. He was as good as he's ever been in his first trip to the AL East, a fact that will still Sox fans a bit given their own team's interest -- and failure -- in acquiring Kuroda. Whether that failure matters in 2013 like it did in 2012 remains to be seen, though, to be fair, Kuroda seems somewhat unique with his ultra-exclusive outlook on free agent destinations, so maybe feeling anything about not signing him is a waste of thought.

Paying for Ryan Dempster pays off 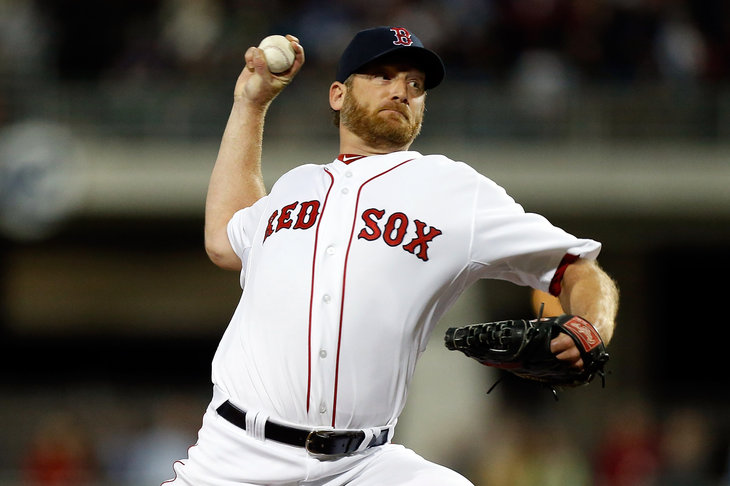 The Red Sox bring their own free agent signing into play for the third and final game of the series. This has the potential to be a bit dangerous for Dempster, as he has his troubles against left-handed power hitters on occasion, and Yankee Stadium was built with the success of that group in mind. With that being said, both Curtis Granderson and Mark Teixeira are on the disabled list to begin the year, so at least the potential of the Yankees' attack is limited in that regard compared to what it could be.

Pettitte only threw 75 innings in 2012, but they were great ones. He was working on his loftiest K/BB since 2005, when he was with the Astros, and owned a 146 ERA+ for the year, but missed most of the second half due to a broken leg suffered on a batted ball. Again, it's just the spring, but he looked sound in the pre-season's 15 innings of work, maybe alleviating concerns a bit that there would be any long-term effect from the injury. He is, after all, heading into his age-41 season.

Neither club will be at full strength, with Boston missing David Ortiz and Stephen Drew, while the Yankees are sans the aforementioned Granderson and Teixeira, but are also without Alex Rodriguez, Derek Jeter, and, while it doesn't matter for this particular series, Phil Hughes and Michael Pineda as well. That being said, there are still plenty of hitters in this lineup that can cause damage to Red Sox pitching: Robinson Cano remains at second, old friend Kevin Youkilis will man first base or third base, Brett Gardner has returned to full-time duty, and if there is any life left in either of Ichiro Suzuki or Vernon Wells, you know very well that the New York Yankees will be the team that benefits from it.