Andrew Miller drove Red Sox fans (and plenty of others) crazy before 2012, but he seems to have turned a corner

In 2011, his first season with the Red Sox, Andrew Miller's mechanics were a mess. That's basically how Boston was able to get him in the first place: once a top pitching prospect, Miller lacked a standard development path in the minors, and instead spent his time bouncing between the majors and minors, year after year, until he ran out of options. The Red Sox gave up a reliever they didn't need (Dustin Richardson) for one the Marlins no longer believed in, and Miller, still a starting pitcher, came to Boston.

Rather than focus on his mechanics, the Red Sox at first attempted to change Miller's pre-game preparation, having him throw more before a game in order to make sure he was emphasizing throwing strikes and attacking the strike zone -- both of these were issues in the past. While it worked at Triple-A for a time, once in the majors, Miller had trouble, and finished the season with equally ugly ERA and FIP, thanks to walking nearly six batters per nine while allowing balls in play to go as hits at a terrible rate. Was some of it poor luck? Maybe, but most of it could be pinned on Miller himself, as he had little ability to put the ball in the strike zone, and when he did, his command was usually off, belying the inherent nastiness of his stuff. 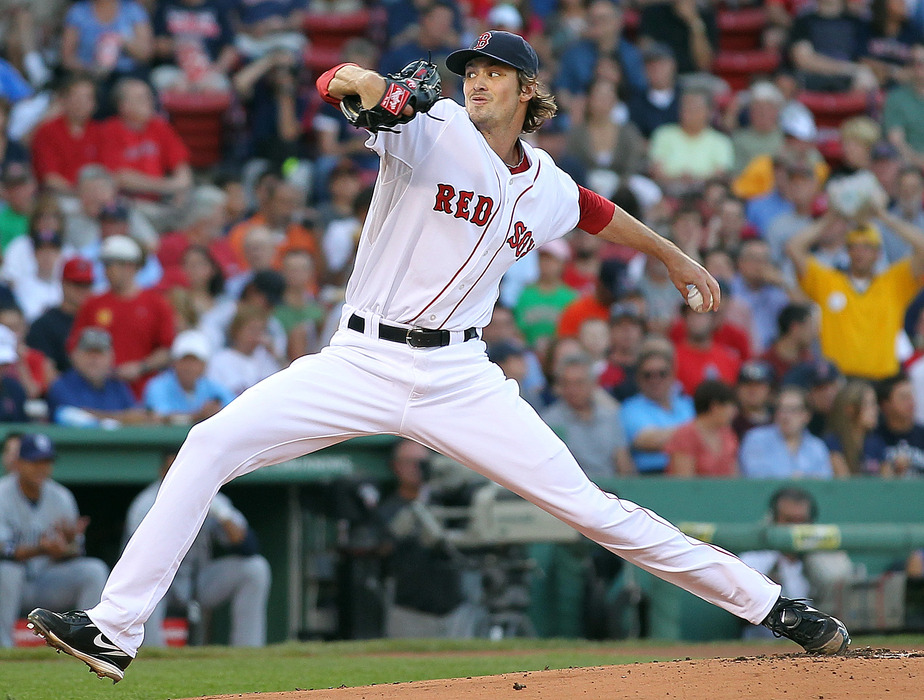 The Red Sox hoped changing Miller's pre-game preparation would do the trick, but it wasn't enough.

The Red Sox didn't give up on Miller after this, though, and instead focused on completely revamping him. No longer would Miller start, as he was exclusively to be a reliever. No longer would he throw from the wind-up, as then-manager Bobby Valentine thought Miller's only chance at success came from the stretch, where his mechanics were much more fluid, consistent, and repeatable. The other Bob, this one pitching coach Bob McLure, shortened Miller's motion, both with his arm and his legs, so as to keep him from throwing across his body so much. Last, Miller swapped out his looping curve for a slurvy slider, giving him a harder breaking pitch with more horizontal movement than its predecessor.

The result? Miller, after nearly 100 games and nearly 360 innings of disappointment in the majors, struck out over 11 batters per nine, posted a career-best strikeout-to-walk ratio, finished with an ERA+ over the league average for the first time in seven years, and ended up with the lowest walk rate of his career as well. That last bit wasn't by much -- he still handed out free passes to 4.5 batters per nine -- but when he struck out 2.6 times that rate in relief, it didn't much matter. The improved command of his pitches due to the mechanical changes also meant it was much harder to hit Miller, since he could actually throw pitches where he was supposed to with something resembling consistency, resulting in a .269 batting average on balls in play and just 6.2 hits per nine.

Relievers do tend to have lower BABIP, so while Miller's might go up in 2013, there's a real good chance he'll still best the league average, and once again destroy his career rate of .327 -- that number has been poisoned by the terrible mechanics and command that plagued his entire pre-2012 career. It's more believable as well when you consider that his average four-seamer velocity shot up to nearly 96 miles per hour from the low 90s with the move to relief and shortened motion, and his harder breaking ball was a much more effective weapon than his curve in concert with this increased heater velocity.

Miller still has his issues. For one, he's only done this for 40 innings in the majors, and while he absolutely destroyed left-handers, right-handed batters were less susceptible to his effectively wild approach to pitching. That makes him something of a LOOGY (left-handed one out guy, for the uninitiated), but Boston could still use that in their bullpen at the moment. Fellow southpaw Craig Breslow is expected to begin the year on the disabled list, and Franklin Morales, another lefty, is pulling double-duty as the first line of defense should the rotation need a spot starter. That leaves Miller with a clear role, at least to begin the year, and with the way injuries and bullpen turnover tend to dominate a bullpen's narrative over the course of the season, he might end up sticking all year once more.

If not, however, it won't be a huge loss. Miller can be hugely valuable within his role, but his role itself is not overly important. It's nice to have someone who can get tough lefties out the way this new-and-improved Miller can, but if he can only face lefties with that kind of effectiveness, he's more of a luxury than a necessity. You'll fit a luxury in as long as you can, though, and Boston will aim to do that with Miller in 2013.