The Red Sox have had some of the slowest working pitchers in baseball over the last five years, but John Farrell and Juan Nieves want to change that. Will working faster actually make the Red Sox pitchers better?

During last night’s spring training game, one of the major talking points was the increase in pace from the Red Sox' pitchers this spring. This change has largely been credited to the team’s new pitching coach, Juan Nieves. Nieves was the White Sox' assistant pitching coach under Don Cooper, and Chicago has consistently been among the fastest working pitching staffs in the game. With Clay Buchholz, previously one of the slowest working starters in the game taking the mound last night, the change in pace was readily apparent.

Over the past five seasons, the Red Sox have had the slowest-working staff in baseball every year but 2010, when they trailed the Yankees by 0.3 seconds. Many of the biggest culprits are gone. Jonthan Papelbon has been the slowest-working pitcher in baseball over the past five seasons, taking an incredible 31 seconds between pitches on average. Among starters with at least 200 innings pitched, the Red Sox have had the three slowest-working pitchers in the game in Josh Beckett, Buchholz and Daisuke Matsuzaka. Jon Lester ranks 15th in that group and Felix Doubront is 16th among pitchers with at least 150 innings. 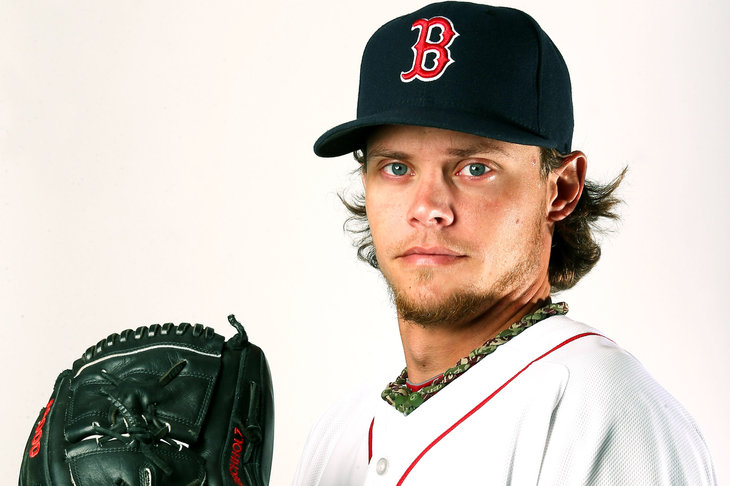 Boston needs Buchholz to have his change-up under control, but there's little reason to believe he won't

Beckett and Dice-K are gone and replaced by Ryan Dempster, who is slightly faster-working than the average pitcher and John Lackey, who was downright expedient before 2011, but that is not the only thing that could help speed up games in 2013. If Buchholz’s work last night is any indication, even ’s slowest-working arms are picking up the pace. That may be fantastic news for any Red Sox fan that needs to get up early in the morning, but the more important question is whether or not it will help the team prevent runs.

Twins color commentator and Hall-of-Fame pitcher Bert Blyleven praised this change in philosophy quite a bit during Buchholz’s start, asserting that pitchers who work quicker help themselves out because the defense behind them is less likely to have their attention wander. In writing about the new quicker tempo, the Boston Globe’s Nick Cafardo echoed that sentiment, saying, "the other benefit to a pitcher working fast is that the defense is far more alert. The infielders don’t like having to stand around." This is the most common cliché about pitcher pace and like many such clichés, it exaggerates the impact of such a change. Pitch F/X guru Mike Fast took on the subject in 2008 and found that any such effect was likely minimal.

Anecdotally, that theory has some strong examples working against it as well. The 2012 Red Sox might have been both pitching-challenged and glacial in their pace, but the third slowest-paced club, the Rays, lead all of baseball in ERA. The fastest-working staff last season was the New York Mets, who ranked 20th in team ERA. Nieves' White Sox were 19th. The Rays defense didn't lose focus behind all those slow-working pitchers either; Tampa Bay ranked fourth in defensive efficiency, trailing average-paced teams like the Angels and the Mariners.

Whatever effect this new pace may have, it is not likely to mean much to ’s defense. Talented defenders like Jose Iglesias, Dustin Pedroia and Will Middlebrooks are not going lose focus in four or five extra seconds of waiting and the quickest pace in the world won’t turn Jonny Gomes into Brett Gardner or Mike Napoli into Adrian Gonzalez. Unless those extra seconds are enough to force the left fielder to seek a bathroom inside the Green Monster, ’s defense is what it is.

However, as Cafardo is quick to point out, the early results this spring have been fairly eye-popping. has the best spring training ERA in baseball at 3.52 and Buchholz has been particularly impressive, with a 0.79 mark in 22.2 innings. Such numbers need an ocean worth of salt, however, and attributing this spring success to the faster pace is a huge, unwarranted leap to make.

Despite all of the wonders credited to an increased pace, faster pitching teams are not more successful than those who work slowly. Below is a five year sample (2008-2012) of team pace plotted against ERA. 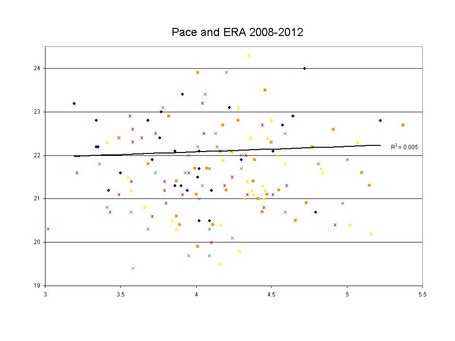 While there might not be a connection between pace and performance in general, it is certainly possible that Red Sox pitchers will benefit from this new approach in individual cases. Both Buchholz and Lester appeared to have had difficulty in dealing with tough calls against them during the 2012 season and giving them less time to brood about that might be a good thing. If such a chance helps Felix Doubront be more efficient, it would be a godsend. There is the other extreme, however. Does anyone really want Junichi Tazawa (who was baseball's 13th slowest working reliever) to change from what he was doing last season?

Pace makes an appealing talking point since watching slow-working pitchers can be frustrating for fans, but it's a complex issue and something that definitely goes beyond the typical "faster is better" mentality.