In a sad day for American League East hitters, the Blue Jays finally decided to send starting pitcher Ricky Romero to the minors. Romero had been a decent enough pitcher in the first three years of his career (though, he was nowhere near as good as his 2.92 ERA in 2011 suggested), but in 2012, the wheels came off entirely. And rolled off a cliff. And burst into flames.

...and possibly begat a swarm of fire-breathing locusts that terrorized the Canadian countryside. You know, some real nonsensical, biblical-level disaster stuff. If the Bible took place in Canada and starred guys with names like Ricky, anyway.

See, when John Lackey posted a 6.41 ERA in 2011, there was a built-in excuse for his performance. His elbow was garbage early in the season, but not quite garbage enough for surgery. By year's end, that had changed, but in between came 160 innings of 66 ERA+ ball. Romero has no such excuse for 2012, when his ERA+ nearly halved from 2011's lucky 146 to last year's 74. He simply lost his command, no small thing for a pitcher who depended heavily on it.

John Lackey's return to the mound 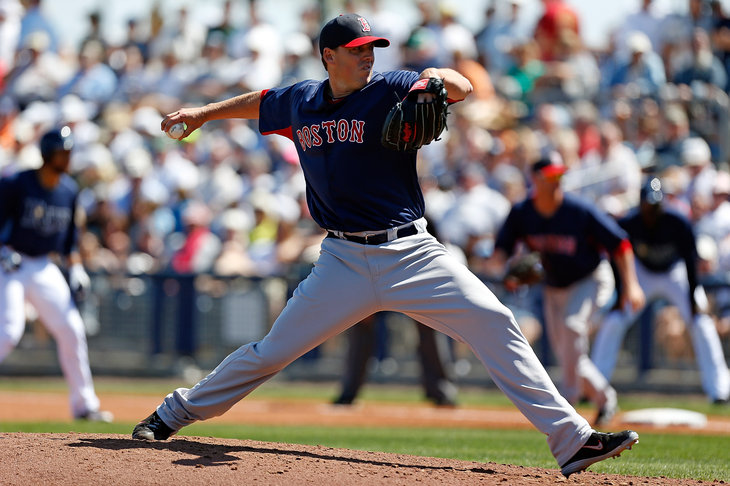 Romero has been durable in his career, and that's been useful. But he hovered around the league-average strikeout rate while allowing a few too many walks. He kept the ball on the ground, however, and used his fastballs to setup his admittedly superb change-up. It all worked until last year, when he could no longer locate his stuff within the strike zone, or find the strike zone consistently at all for that matter.

He still can't find the strike zone this spring, with 10 walks against eight strikeouts in 13 innings of work. The Blue Jays have sent him all the way to High-A rather than just Triple-A, to give him a chance to slow things down and put himself back together. Batters in High-A shouldn't be used to the kind of arsenal Romero has, so at that level he can break things down and focus on just his fastball location for a time without it being hammered by players close to the majors.

Whether that works is to be seen. You never want to see someone's career fall apart like this, and more selfishly it's hard not to miss, just a little bit, the guy the Red Sox have scored 69 runs against in 78 innings in 15 career starts. Get back soon, Ricky, because Boston hit you hard even when you were right.