Jon Lester's mechanics are sited as the reason for his fall from grace. Last year was bad, but things have been much better this Spring. What has made the difference?

Pitchers lose their effectiveness for many reasons. The reason I've heard most often that supposedly explains why Jon Lester turned from one of the best left-handed starters in the league into decidedly not that was mechanics. For some reason Lester, while in his prime and physically able to throw his pitches with the agility and velocity required, couldn't do so. The specifics of those mechanics are where things get complicated, but before we try and go there, let's go back a bit and try to establish a baseline.

If you go to Baseball Reference and pull up Jon Lester's 2012 game log, you'll find his worst start of the year by sorting by runs. It looks like this: 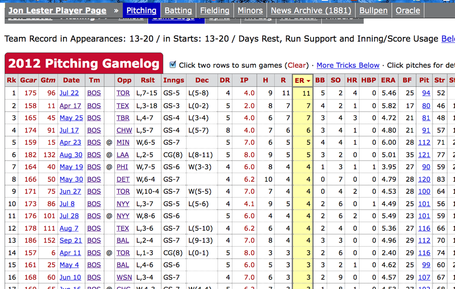 You can see that most of Lester's starts were decent. Most of Lester's starts weren't disasters but more were than should be on the resume of the staff ace. Anyway, see the game at the top? That's the game. Lester got destroyed by the Blue Jays. He gave up four homers including back-to-back homers and one on the first pitch of the game. He walked five in four innings. He struck out two. The results were very, very bad. He was very, very bad.

This spring has been different. In 20 innings he's given up two runs, walked four, and struck out 16. That's encouraging, but what is the difference between the two?

Last April, Lester labored through a 50 pitch inning against the Rangers. Fifty pitches for three outs. That's a lousy exchange rate. The excellent Sam Miller wrote about it at Baseball Prospectus. In the piece, Miller noted that Lester's mechanics changed from the beginning of the inning to the end. You'd expect a guy to get tired throwing 50 pitches, but oddly Lester's fastball velocity didn't dip. The only thing that changed were his mechanics. Miller asked BP's pitching mechanics expert, Doug Thorburn, about the inning. Thorburn said:

...the main symptom of the missed target is late initiation of trunk rotation, and his arm fails to catch up to the body, this despite the fact that his stride timing looks pretty similar.

This was in reference to this one inning but I think it's at least somewhat instructive in that at least in this one instance, when Lester got out of wack, this is what happened.

In a piece analyzing Lester for the Spring Training Profile series, our own Marc Normandin put the problem on the same mechanical issue.

Luck can play a part in BABIP, but Lester was failing to keep the ball down, and there were even whispers out of Toronto, following Lester allowing 11 runs to the Blue Jays on July 22, that his mechanical problems were essentially tipping his pitches. It's bad enough if your stuff is flat, or up in the zone, as Lester's was thanks to his problem with opening up too early with his motion. Add to that your opponent knowing what flat pitch is coming, all they need to do is wait and see where they need to swing.

So here as well, Lester's altered mechanics were not allowing him to keep the ball down in the zone. While those articles use different terms, I believe they're talking about the same problem. In a nutshell, the mechanical problems consisted of opening up too early in his motion, which caused the arm to drag behind the body and minimized control.

"When you look at the lower half in his delivery, he’s working downhill much more consistently. If you look at video, any time mid-season last year till now, you’ll notice a very different lead leg. That’s been able to allow him to work from kind of a high to low type trajectory through the strike zone rather than collapsing on the backside and pushing the fastball through the zone. Probably the quickest way I could explain it. And that’s what’s allowed him to throw the ball down at the bottom of the zone."

In the same article, in reference to a spring start Lester said, "I was able to do the same things we’ve talked about early on — staying tall and driving the ball downhill." So that confirms our hypothesis.

Still, I wanted to see the differences. So I went and looked at some video. I pulled up that infamous game, the July 22 game from last season at Toronto. The video quality isn't as good as I'd hoped and the camera angles are different, so my apologies for that right up front. Still, I think we can see something worthwhile. I found pictures of Lester's delivery at about three different points and I've lined up images from the game last July with images from his March 17 start against the Rays at Fenway South. 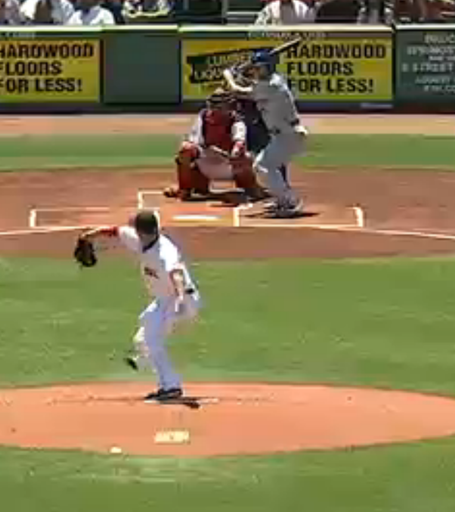 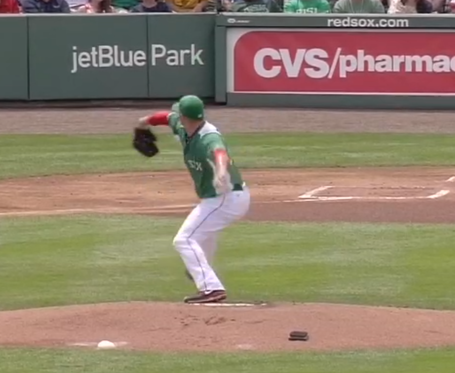 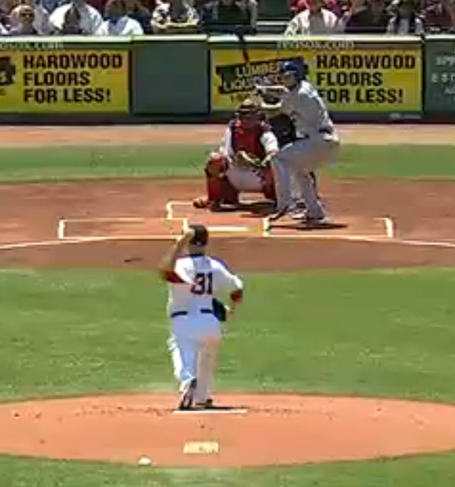 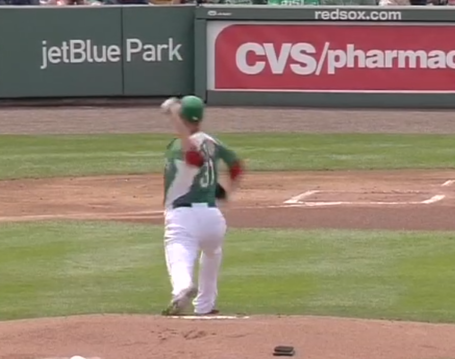 First, compare Lester's non-throwing arm and the location of his feet in the two pictures. They're very close but not exactly the same. The throwing arm is in a similar spot (though admittedly not exactly the same). That's important to note because otherwise I'd say this is exactly what Farrell and Thorburn talked about. Look at Lester's trunk in the first picture. He's much more open (i.e. facing home plate) than in the second where his upper body is almost facing first base. 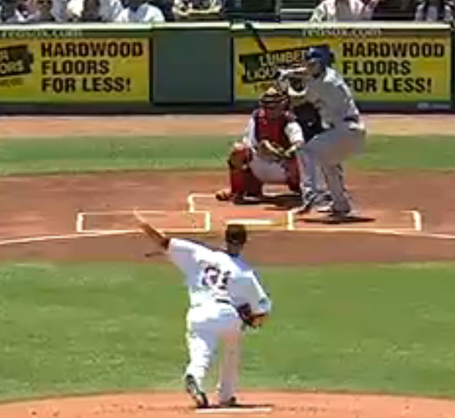 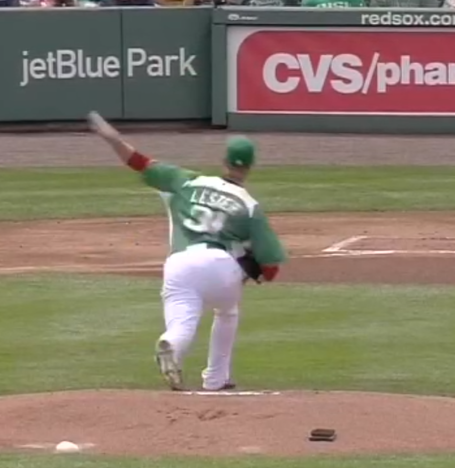 I don't see much difference between the two here. The throwing arm, head, lead arm, and feet are all in similar positions.

To me, we have to go back to the second group of pictures. I don't think those pictures are perfectly sequenced but I do think that that's more or less what the problem was. New catcher David Ross spoke to Scott Lauber of the Boston Herald about Lester and mentioned something I think is instructive.

His posture is getting better," catcher David Ross said. "He's getting more angle on the ball. I know those are some things he's working on. I definitely see a consistent downhill plane on his ball. His stuff is so good he can get away with it sometimes, but he will be more consistent and roll through the lineup and be a little easier, in my opinion, to get that good posture and get on a downhill plane. I think that's the main thing he's been working on. He looks good to me. I can't comment on last year, but he's definitely throwing really well."

If Lester can stay under control and repeat his mechanics, hopefully we'll see a bit of the old Lester back on the mound at Fenway this season.