The 2013 Red Sox and laying the foundation

With one week to go until Opening Day 2013, let's look at how this season will shape the next decade of Red Sox squads.

Share All sharing options for: The 2013 Red Sox and laying the foundation

One of the great logistical headaches any person faces, particularly in their twenties, is changing apartments. Questions constantly abound. Do we hire a moving service or bribe car-owning friends with beer? Is that apartment's rent incredibly low because we got lucky, or because it's right above a sawmill? Is it a bad sign that upon checking our credit score, the landlord's computer burst into flames? Another consideration, though, tends to dominate the new apartment conversation: since buying new furniture/appliances/etc. is a giant pain in the ass, what do we already own that's worth keeping around?

The Boston Red Sox currently face that same question. Ben Cherington has stated that his goal is to create the "next great Red Sox team," and as the franchise moves toward that goal, it's worth asking if any of the parts of that team are already in place. A few months back, Matt Kory looked at 2016 as the probable timeframe for that team to arrive, and given the current state of the farm system (and the likely arrival of Giancarlo Stanton's free agency), that sounds right to me. So with 2016 as the goal for the dawn of a new Sox dynasty, that pretty evenly divides the current players under Boston control into three neat groups.

The first is, of course, the farmhands we're all hoping will be superstars, or at least solid regulars, by 2016. Jackie Bradley, Xander Bogaerts, Matt Barnes, Allen Webster, Blake Swihart. The cream of the Sox prospect crop, the young, cost-controlled players who will form the homegrown core of the next great Boston club. The second is the bridge guys, the stopgaps, the older veterans who can keep the team afloat in the meantime. Shane Victorino, Mike Napoli, David Ross, Ryan Dempster, John Lackey, David Ortiz (sigh). While their performance certainly matters, and strong showings would be great, none of those players is likely to spend much time in Boston past 2015.

It's the third group for whom 2013 is absolutely critical. These are the players who have already established themselves on the team, but are still young enough to play an important role in the future. Their performances this year will go a long way toward determining what parts will already be in place for Boston as the farm fleshes out the 2016 roster. If these six do well, and prove worth keeping around, they'll make the move that much less difficult. We'll go alphabetically, because why not:

Buchholz came up in 2007, and threw a no-hitter in his second start. We've spent the last five years waiting for that Buchholz to show up for an entire season. His 2010 came closest, although his strikeout rate wasn't what it could have been. Last year saw the slender righty put together four good months bracketed by two horrible ones. He's looked good all spring, and he's still the pitcher with the best pure stuff on the team. A live fastball, nasty curve, and back-twisting change give Buchholz all the tools he needs to become the ace of the staff. He's just never managed to put it all together. He's still only 28, and signed through 2015, with team options for 2016 and 2017. With a strong 2013, he could secure his spot in Boston for the bulk of the decade. A poor showing would force Boston to consider sending his team-friendly contract to the more forgiving lands of the NL West.

Doubront is one of the two newest additions to the current core, which on the one hand makes him harder to project, but on the other makes him younger and cheaper. Young and cheap are big bonuses when assembling the Red Sox of the future. In his first full season with Boston, Doubront gave us a lot to dream on, but also a few things to worry about. He put up a 9.3 K/9 rate, better than Clayton Kershaw and Justin Verlander. Of course, he pitched far fewer innings than either of those aces, largely due to his high walk rate (4 BB/9) and general pitch inefficiency. If he can keep striking out batters from the left side while bringing his pitch counts under control, the 25-year-old lefty could become a rotation mainstay for years to come.

I know, I know, I know. He's a Boras client, he's always hurt, he's probably going to bolt to Texas or LA or Seattle or somewhere else with a big outfield and lots of other center fielders to play with. Beyond that, the Sox have Jackie Bradley busting his way into the bigs, so who needs Ellsbury? Still, he's a valuable player when he's healthy, he's only 29, and good outfielders are hard to find these days. Witness the Yankees and their recent, hilarious acquisition of Vernon Wells. We've all basically decided that Jacoby's leaving sometime this year, whether by trade or free agency, but none of us work for the Sox. It's entirely possible that a solid 2013 will lead to a re-signing, and a 2014 Ellsbury-Bradley-Victorino outfield where fly balls go to die. 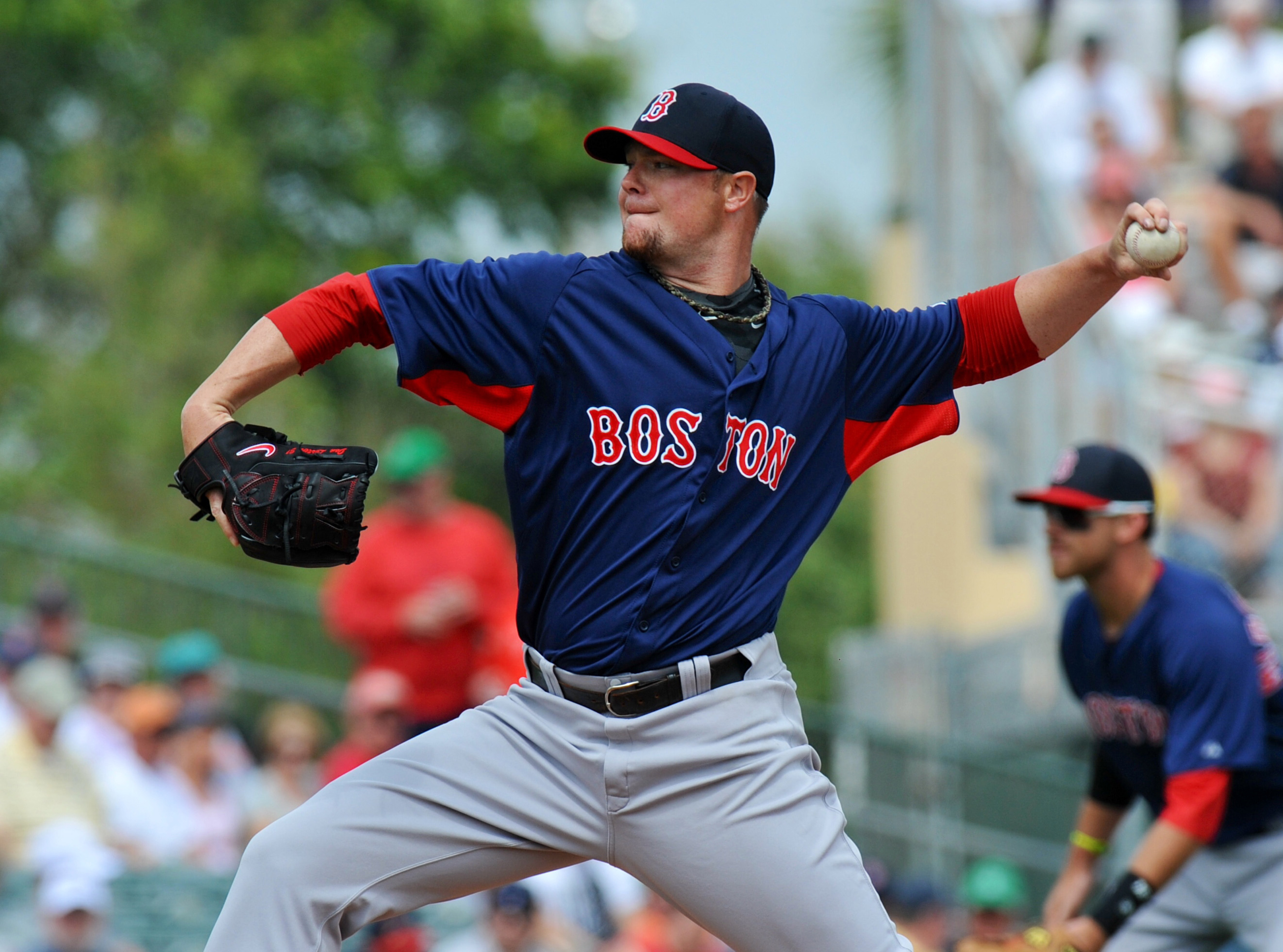 Arguably the most important player on this list. Lester came up in 2006, lost a year to cancer, came back in 2007 to win the final game of that year's World Series, and promptly established himself as the ace of the Boston staff. He's racked up 85 wins and 1,060 strikeouts already, and he's only just turned 29. Still, 2012 was a lost year, as he put up a 4.82 ERA and never once looked like the dominant Lester of 2008-10. He's signed through this year, with a club option for next year. If he returns to form, the Red Sox have a young, 200-inning a year lefty to build their rotation on for the next six years. If he doesn't, then we all need to hope Allen Webster and Matt Barnes are for real.

The other new addition to the list, Middlebrooks forced his way onto the roster with a blistering campaign in Pawtucket at the exact moment that big-league stalwart Kevin Youkilis was struggling. After Youk's trade to Chicago, Middlebrooks took instantly to the starting job at third, contributing solid power, stellar defense, and a great affinity for the Boston fanbase. Only 24, and entering his second big-league season, Middlebrooks seems an obvious candidate to anchor the team for the foreseeable future. However, his position is arguably the one at which Boston is deepest in the minors, with Xander Bogaerts possibly outgrowing shortstop and Garin Cecchini impressing at the lower levels. With a strong 2013 on and off the field, Middlebrooks can secure his spot in the team's long-term future, whether it's at the hot corner or some other spot on the diamond.

The heart and soul of the current Boston Red Sox team. Owner of the filthiest uniform, loudest mouth, and most Bigfoot-loving Twitter account on the squad. He's also, as it turns out, an elite second baseman. In addition to his highlight-reel defense, Pedroia consistently gets on base and takes advantage of Fenway's short left-field porch to rack up doubles upon doubles. He's exactly the sort of hard-playing middle-of-the-diamond player that teams dream of building around. That said, he's turning 30 this year, and he plays so damn hard that he might actually combust out on the field some day (or, more likely, fracture/tear/dislocate something). He spent last year struggling to play through pain. With a healthy 2013, he can reassure the Sox and gain the long-term contract we're all hoping for.

With the caveat that yes, Ellsbury's almost certainly gone, that's half an infield and three-fifths of a rotation, all of them currently under 30. We talk a lot about the core of the next great Red Sox team. This year could prove that most of that core is already here.