Come the winter, the Red Sox may have faced a tough choice between appeasing a disgruntled fanbase and sticking to their plans for long-term success. Jackie Bradley Jr. has made that decision easier.

Amongst those Red Sox fans who follow the team's budget, there's a general understanding that Jacoby Ellsbury will not be with the team in 2014. Barring a really bad season which drives his price way down (and makes him less desirable for the Sox besides), he's going to cost far too much for the Sox to be interested given their current plans of building around the upcoming products of the farm system. Just look at what the Braves are paying B.J. Upton after a season with a sub-.300 OBP.

It's easy for those of us in that group to forget, however, that there are many fans out there who never see the payroll in dollars and cents. The sort who didn't care what they were paying John Lackey or Carl Crawford because of the caliber of player the team was (supposedly) adding. And, on the other hand, when they let a player like Jason Bay go in free agency because the asking price is too high, it's not dodging a bad deal, but losing an asset.

It's not exactly a legitimate approach to take, at least as far as serious analysis is concerned. While you can certainly be a fan without delving into these specifics, it does no use to ignore the financial realities of the sport when actually trying to evaluate the actions of the front office. But it's not an insignificant portion of the fan base.

In fact, when it comes down to it, those of us who talk about average annual values are very much a minority, and the team certainly has to make concessions to keep the interest of those who do not. The Bobby Valentine signing felt a bit like that, and there was some concern that the team would make an ill-fated splash into the Greinke or Hamilton market this offseason in an attempt to renew interest after three seasons without playoff baseball. If 2013 doesn't go well even with a productive Ellsbury, we may be spending October-onward worrying about the Red Sox locking themselves in too a too-large, too-long deal with their center fielder. 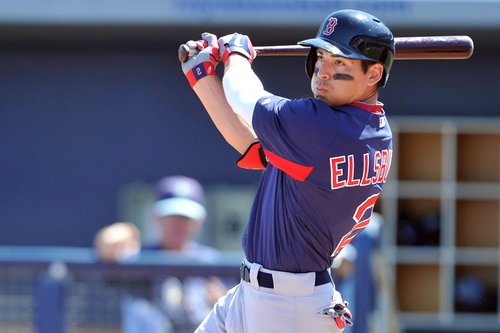 Wes Welker signed with the Denver Broncos, leaving Patriots fans looking for villains where there are none. Can Red Sox fans avoid falling into that same trap?

That scenario is getting harder and harder to imagine by the day, however, thanks to Jackie Bradley Jr. Spring often brings an unusual level of focus on a player who wouldn't otherwise enjoy such a bright spotlight, but even with that in mind the obsession with Bradley is unique. While there are very few people actually calling for the Red Sox to trade Ellsbury to make way for him (at least not while Ellsbury's trade value remains questionable at best), there is a sense of inevitability. In the span of a month, Bradley has gone from being a highly-touted prospect to being the widely accepted future of the position for the Red Sox, most importantly earning that place even in the minds of many of those fans who wouldn't have known his name before spring training began.

And really that's all Boston needs. Even if the front office showed enough resolve in remaining conservative this offseason to convince most of us that they're committed to a long-term sustainable solution to their recent problems, having Jackie Bradley Jr. just makes it that much easier to sell Ellsbury leaving to the every day fan. No, no prospect will cushion the blow if Ellsbury ends up with another 30/30 season. But, in the very likely scenario where Ellsbury is simply good and not great, Bradley's presence makes it that much easier to sell the center fielder's eventual departure.