Daniel Bard hasn't been optioned to Triple-A. At least, he hasn't been yet. However, it's easy to see that happening given what general manager Ben Cherington is saying about him:

Cherington hinted Bard might open season in Pawtucket. Sid he's 'a lot farther ahead' but 'probably not all way to where he wants to be'

Were the Red Sox out of alternatives for the short-term at season's start, you can be sure Bard would work out the rest of the kinks in the back of Boston's bullpen. However, they aren't without other options, and therefore it's likely, unless Bard takes the rest of the steps needed to be back to where he should be in the next week or so, that he'll use an option and begin the year at Triple-A.

Bard won't be the only one missing from the pen, however, should that come to pass. Thanks to injuries, Franklin Morales and Craig Breslow will also both miss the start of the year. Breslow is currently working his way back from shoulder weakness, and the delayed start to throwing this spring is why he'll miss time. Morales, on the other hand, is dealing with a bulging disc in his back that he has received an epidural shot for, so the timetable is a bit more up in the air in terms of when he'll be ready to go.

That's three arms missing from the Red Sox bullpen that were all highly likely to start the season with the big-league club. Bard, maybe a little less so than the pair of lefties, but the last spot in the pen was somewhat his to lose at the start of camp, entirely dependent on the progress he could or could not make in his return to form.

So, where does that leave Boston's bullpen on April 1? The most-important elements -- the back-end arms -- are in place already. Joel Hanrahan is closing, while Andrew Bailey, Junichi Tazawa, and Koji Uehara are all in place as setup men. No surprises there. It's everywhere else that needs replacement arms. They won't have to pull from the minors in order to fill out the ranks -- this rash of injuries and a potential optioning of Bard have simply opened a door thought potentially shut for a number of big-league pitchers.

Now, Miller might very well have made the roster anyway, possibly by pushing Bard to Triple-A in any situation that didn't see him untouchably dominant as in the days of yore. But now, with the other two left-handed options on the disabled list, he's guaranteed to be with the Red Sox on Opening Day. Thanks to the depth of the back-end of the pen, Miller can be hidden away from right-handers often, and be used nearly exclusively for the purposes of making left-handed batters hate themselves thanks to his slurving slider and wicked two-seamer.

Thanks to mechanical changes, Miller can actually be considered reliable for the first time in his career. Granted, the sample is small, but from a scouting perspective, the areas that needed cleaning up in his delivery and repertoire seem to have been tweaked, and effectively. Whether he sticks with the Red Sox all year long is another thing, but he'll be there in the season's first contest against the Yankees, slinging that mid-90s fastball from the stretch with the accuracy he only recently discovered.

Mortensen was very likely the first member of the 40-man roster to be cut this season, or even before it -- possibly the first victim of Opening Day cuts. However, his presence is needed for at least a little while longer, so that ax has been stayed temporarily. Mortensen had a surprisingly effective 2012 -- like Miller, mechanical changes were at the center of his production. Thanks to shifting to the first base side of the rubber, Mortensen -- who features a high-80s fastball, slider, and a change-up -- was more effective, as that kind of shift benefits pitchers with his repertoire immensely thanks to the natural movement of those pitches.

Whether or not he can continue with his effectiveness is a question, though. Mortensen had quite a bit of luck in 2012, pitched poorly in the second half of the season, and no longer has the option that made him so valuable to the Red Sox last season. While his pitching itself was important, the fact he could be shuttled back-and-forth between Boston and Pawtucket whenever the Sox did or did not need him in the bullpen was an additional benefit. With that option no longer available, Mortensen needs to pitch well enough to justify a season-long roster spot. That might be difficult once the missing pieces are ready once more, given what's already in the pen. 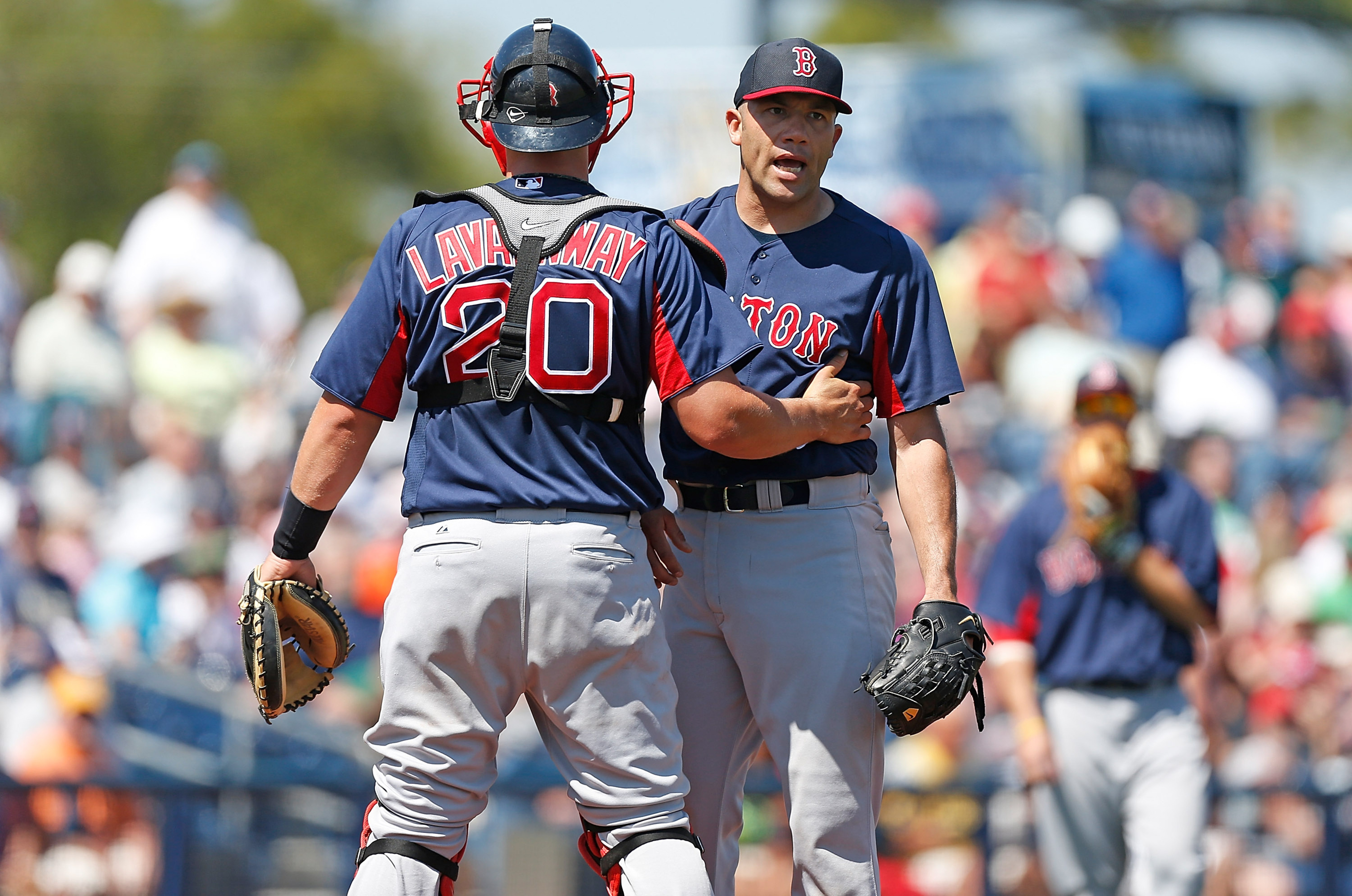 With Morales out, Aceves might very well be the first line of defense should someone need to make a spot start very early in the season. That isn't expected to come to pass, given that the rotation has been healthy this spring, but as Red Sox fans know, having someone ready in case of emergency is important.

It was expected he would be traded before the season began, given last year's issues with manager Bobby Valentine combined with his poor performance, but those things don't exactly endear you to other clubs, either. For now, Boston has room for him, and if that room vanishes a couple of weeks into the season, the hope is that he's pitched well enough to be traded. Of course, if he pitches that well, keeping him around until Daniel Bard is absolutely prepared to return to the majors is tempting, too.

Aceves will not pitch well unless he dials his velocity back down a bit, however, or if he's managed to learn how to command his speedier offerings with more consistency than he was capable of in 2012. He's a talented arm, but he's in a bullpen full of talented arms: he's going to need to prove he's worth keeping in what could very well be a small window at the season's start. He's not necessarily the first in line to go, by any means, but at some point, there will need to be room for Morales, Breslow, and Bard: should the rest of the pen be healthy and performing to expectations, that makes it tough to keep Aceves around just because of space, if nothing else.