Jackie Bradley, the Red Sox Opening Day roster, and why it's still not a good idea

Share All sharing options for: Jackie Bradley, the Red Sox Opening Day roster, and why it's still not a good idea

There's been much talk here and everywhere about Jackie Bradley. Will he or won't he make the team? Should he or shouldn't he make the team? We've covered it more than a little bit here at OTM so I apologize for adding to the cacophony, but last night, while electronically leafing through the latest notes on Boston.com's Extra Bases, I saw a quote from GM Ben Cherington that raised my hackles. Here's what he said in regards to Jackie Bradley's making of the team.

We haven’t made any decisions. We’ve got spots up for competition. I think anybody who is in big league camp this late in the spring has a chance to make the team."

That wasn't the hackle offender. In fact, that sounded perfectly reasonable. I sipped my coffee. (I'm an afternoon coffee drinker. Sue me.) Here's the good stuff, or, as I like to call it, the bad stuff.

Cherington claimed that keeping Bradley away from free agency for an extra season is not a primary motivation. "There’s all sorts of factors to consider. But I think the simplest ones are probably the most important," the GM said. "Those are, is there an everyday role? Is the player really ready for it and what’s our best team? If we use that to guide us, more often than not we’ll make the right decision."

So according to Cherington, there are three basic questions whose answers will guide the team in its decision as to whether or not to demote Jackie Bradley. So let's do it their way. Let's forget about the service time issue for now, go through these questions, and try to figure out if the Red Sox really should have Jackie Bradley in their starting lineup on opening day.

1. Is there an everyday role?

With injuries an opening can be created in the starting lineup. If David Ortiz is down then the left field platoon of Jonny Gomes and Daniel Nava can become a DH platoon. That opens up left for Jackie Bradley. Or, alternately and additionally, Shane Victorino could move from right to left to allow Bradley to play right field. It should be noted that both solutions answer the question affirmatively, neither allows Bradley to play his position of center field.

Answer: Sort of. I mean, yes but not at Bradley's exact position. Maybe it doesn't make a difference if he plays left, right, or center. I can see how it would matter and I can even see an argument that it's setting him up to fail, but maybe it isn't.

2. Is the player really ready for that everyday role?

From all reports Bradley the person seems ready to handle a major league job. The issue remains whether or not Bradley the ballplayer can handle a major league job, and that is much more difficult to answer. Presumably the Red Sox feel Bradley can handle it if they're talking about actually doing adding him to the opening day roster (which it seems they are). That the experts are for it should carry some weight. But even so, it's putting an awful lot of stock into 53 training plate-appearances against a questionable level of competition.

Answer: Hard to say. It seems he could handle it off the field. On the field has to be a bit more iffy just because his experience level is so low.

3. What is our best team (i.e. does our best starting lineup include Bradley)?

That depends on what you think Bradley can do at the major league level right now. We're all so conditioned to think of Bradley as a prospect, but this isn't about projecting a player into the future. This is 'what can you do for me right now?' Despite Bradley's silly slash line (.444/.545/.578) it's debatable how effective he'd be against a steady diet of major league pitching. Maybe he has the chops to step in and produce. But maybe he doesn't.

Answer: Maybe. Is Bradley's bat really appreciably better than whomever would man the DH spot over one and a half weeks? I think that's a tough argument to make. I'm not sure there are many players in the game who you could give an absolute yes to, either.

At the conclusion of this I've got a "Sort of," a "Hard to say," and a "Maybe." Hopefully the Red Sox can be more definitive in their answers. If they can't then that's probably an answer in itself.

That all brings up a question I've not heard anyone ask before in regards to Bradley. What if he fails? What are the consequences of failure? Last year Boston tried to turn Daniel Bard into a starter (a move I supported at the time) and the results were so disastrous that a year later Bard is just now remembering how to be an effective reliever. His return to productivity is still far from assured too. So what happens if Bradley fails? What are the implications for his career? Can he handle total failure on the big stage? Would failure damage him as a prospect? Would it set him back? I don't know what the chances are of that happening and I'd imagine them to be small, but when talking about bringing Bradley up (and I swear I just accidentally mistyped his name as "Bardley") failure has to be a part of the calculus. 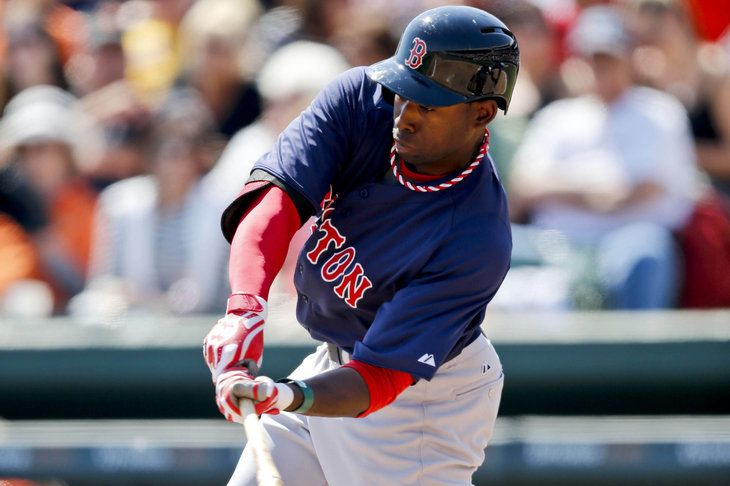 What type of competition has Jackie Bradley seen leading up to the regular season?

I don't know what the Red Sox will do with Bradley, but keeping him up will make sending him down very difficult if he does well. Maybe a nice problem to have, but a scenario that likely ends with the loss of a year of team control for very little in return. Alternately, he could do badly and then get sent down, potentially slowing or halting his development as a ballplayer. And that scenario could also come with a loss of a year of service time.

In the end, I'm still failing to see how this works. Bradley has the makeup to succeed in the majors right now. He's hit very well this spring and he's clearly an important part of the Red Sox future. But the hitting has come in a small sample against questionable competition, his position isn't open at the major league level, and it's debatable how much of an impact he could make in the two or three weeks before David Ortiz returns. Add to all this the real and severe cost to Boston of playing him immediately instead of waiting two weeks and the whole thing makes even less sense.

Bradley is an exciting player. He's young, he represents promise at a time the Red Sox are coming off of two seasons they'd rather forget. I get that. But the Red Sox shouldn't let those two seasons goad them into making a bad decision. Good decisions that are based on what is best for the long-term health of the franchise are what is needed, not reactionary judgements in attempt to paper over the recent past in the name of 'excitement' and 'youth.' Jackie Bradley is a big and bright part of the Red Sox future. He can even be a part of the Red Sox in the very near future. Waiting just a few weeks to be sure it's the right move for the player and franchise should do the trick.

Before I go, two quick items in Cherington's defense. It should be noted that in the article quoted above, Cherington isn't the one saying Bradley's free agency isn't a concern. He hits at it in the quotes but never specifically says it. It's the writer, Peter Abraham, who does.

Also we have to allow that maybe this is Cherington's PR voice talking. There is good reason for him to be less than forthcoming to the media when it comes to this topic. Teams don't like to be seen as gaming players' service time, even if everyone knows that's exactly what they're doing. So from that standpoint projecting an air of true consideration won't hurt anything.