From 2007 through 2010, Jacoby Ellsbury hit 20 home runs in over 1,500 trips to the plate. In 2011 alone, Ellsbury went deep 32 times in less than half as many plate appearances. What changed? He was healthy, for one, but there was more to it than that. Ellsbury worked on becoming a better, stronger hitter after a 2010 campaign in which he played just 18 games due to busted ribs. The league, slow to catch up, also did their part.

The first part is pretty self-explanatory: Ellsbury, typically a leadoff hitter without a lot of home run power, spent his rehabilitation and off-season working hard to be more than just a guy who could lead the league in stolen bases. he showed up to camp bigger, stronger, and most importantly, healthy. The second part, though, requires more explanation. The league continued to pitch to Ellsbury as it did when he wasn't a homer threat, up through the end of 2011. They had reason to do so, at least initially: Ellsbury had always been susceptible to fastballs inside and low, like so many before him without the power to do anything with the tough pitch. As a result, he saw fastballs at a rate that only players without pop tended to leading up to 2011:

He was more of a threat than David Eckstein, so the league didn't throw fastballs at him all the time, but they did so enough to put him #16 in the majors over a four-year stretch. As for 2011, when Ellsbury began to crush heaters -- according to Fangraphs' PITCHf/x run value for pitches, he produced about 24 runs above average against fastballs alone -- he still saw them 62 percent of the time, 11th in the majors.

The expectation was that he'd see fewer fastballs in 2012, as the league would have had more time to adjust to the fact that he could now crush the pitches that used to be so key in getting him out at the plate. However, Reid Brignac took care of that particular concern a week into the season, dislocating Ellsbury's shoulder and effectively knocking him out for the year. Sure, Ellsbury returned mid-season, but he hit .271/.313/.370, struggling to produce for stretches of any length as the effects of the shoulder injury continued to impact his season. 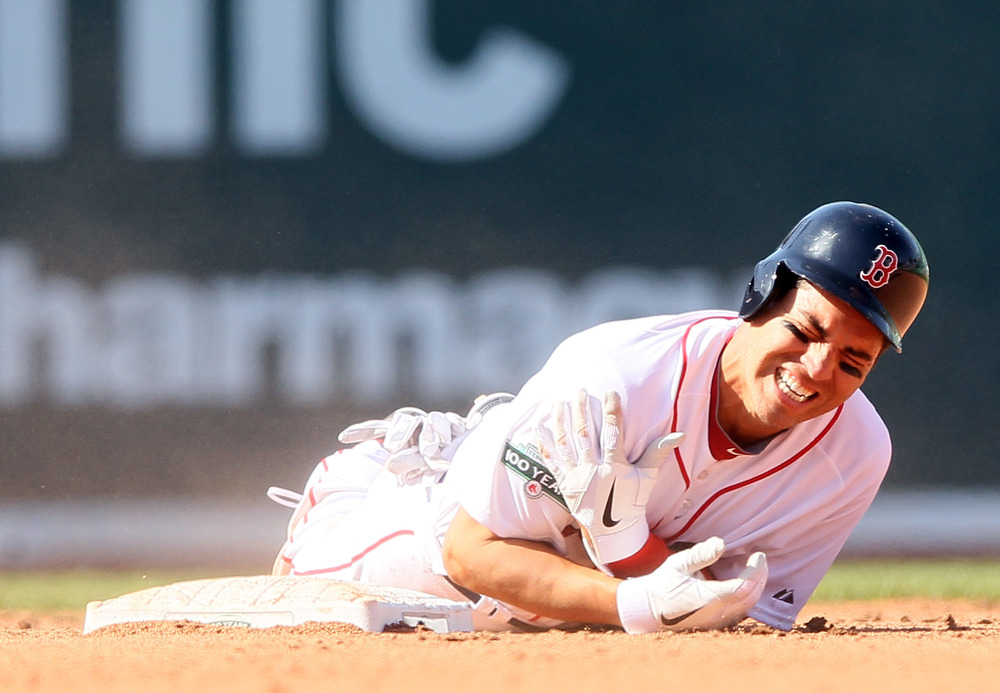 Ellsbury saw 61 percent fastballs when he did play, so the league didn't bother to scale back too much overall. Had he qualified, that would have still ranked in the top 25. They just might settle in around the 60 percent mark going forward, especially since behind Ellsbury there should be quality hitters they don't feel like pitching to, either. Going forward, this is good news for Ellsbury's power.

Maybe he won't go deep 30 times again, but it's believable that he could still park the ball 20-25 times. The Red Sox want him to think like a power hitter, with new hitting coach Greg Colbrunn wanting to emphasize aggressiveness, a la Kevin Youkilis a few years back:

"We're trying to get in his mind thinking that he's more of a power-hitter, Being aggressive. And that's something we've been trying to stress with him, and he's been stressing it to himself," said Red Sox hitting coach Greg Colbrunn. "That drive-the-ball mentality instead of just getting on base.

There's a difference between being aggressive and being impatient, and it all has to do with having a solid approach. Ellsbury will get on base plenty given his batting eye if he can scare pitchers into being careful with him with his power, so driving pitches he can do something with rather than focusing so much on just making contact makes a lot of sense for him.

If Ellsbury doesn't get the power back that made him so good in 2011, however, he'll still have plenty of value to the 2013 Red Sox. From 2007 through 2010, Ellsbury hit .291/.344/.405, and his glove lends plenty to the Boston cause as well. It wouldn't be ideal, but it would certainly beat his 2012. So long as he's healthy, however, he should be able to avoid those depths and produce something that the Red Sox can use in what might be his final year in their uniform.