The Red Sox are facing at least two weeks without David Ortiz. Can they weather the storm?

It's been a bit of a rough spring training for the Red Sox, at least health-wise. Stephen Drew is concussed, Craig Breslow and Franklin Morales are each dealing with issues that will see them on the disabled list come April 1st, and even Pedro Ciriaco has gone missing of late thanks to some back spasms.

The big name, though, is of course David Ortiz. An initially innocuous heel injury picked up all the way back in July of 2012 lingered, costing him the end of that season, and has left nasty little presents behind to keep Ortiz in pain and out of action for the first four weeks of spring training. He's back to swinging the bat now, but the Red Sox still aren't expecting their top slugger to return until mid-April. 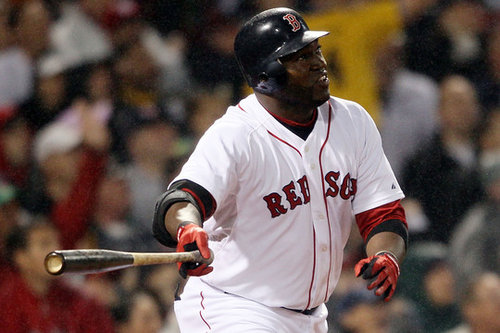 David Ortiz is back to swinging a bat again--no small step for Boston's best hitter.

So, that's at least two weeks without David Ortiz. Any time without Ortiz is bad, and the fact that two weeks is just the lower limit is ominous in it's own right. Still, he's just one player on a team of nine. What's the damage? Is it greater than the loss of the individual player, or are there instead some mitigating factors?

An argument for the damage being severe is perhaps best made by a simple appeal to the lineup. Consider these two possible starting nines:

The only difference between the two is David Ortiz, but having Ortiz in there really seems to put everyone in a proper place. Without him, this looks ugly, ugly, ugly. There are high hopes for Will Middlebrooks, but having a sophomore with some potential OBP issues batting fourth is far from ideal. Salty is an extremely one-dimensional hitter to be batting fifth, and Gomes has his flaws writ large.

Of course, given what we've seen so far in spring training, Farrell is likely to push Dustin Pedroia to the third spot by moving Shane Victorino up to second, and there's certainly adjustments to be made depending on if the opposing starter is left- or right-handed. But any lineup with Pedroia hitting third has major issues of it's own, particularly if Shane Victorino doesn't show signs of bouncing back and is still batting second.

On the other hand...there's some chance to make the best of a bad situation. You'll notice one of the differences between the two lineups is where Jonny Gomes plays. In the first, he's the left fielder, in the second, the DH, with Daniel Nava taking over. A definite improvement defensively given how decent Nava looked out there last year.

Still, just a handfull of defensive games isn't going to make up for the lack of Ortiz' bat. In this case, we'd be switching out said monster for Daniel Nava. And while I think Nava is a bit better than he's shown given the physical issues he had to deal with last year, he's essentially profiled as a league-average hitter in his short career-to-date.

But those kind of calculations are the ones that are pretty tough to swallow. Is the difference between those two lineups really only one game in 30? Is David Ortiz actually just worth five wins (a very good number in the world of WAR, admittedly) at his best? Perhaps so. And, if that's the case, it should be good news. It means not much will be lost if Big Papi meets that optimistic return date.

For those of us who have trouble swallowing that, though--who look at lineup number one and lineup number two and see an ocean of difference--these first two weeks are going to be a very scary time. After two years of terrible, terrible starts, Boston can ill-afford another bump out of the gate. And with six games in New York and Toronto staring them in the face, David Ortiz' presence will be sorely missed.

*For the purposes of this piece, I'm assuming Daniel Nava and Ryan Sweeney make the bench right out of the gate.